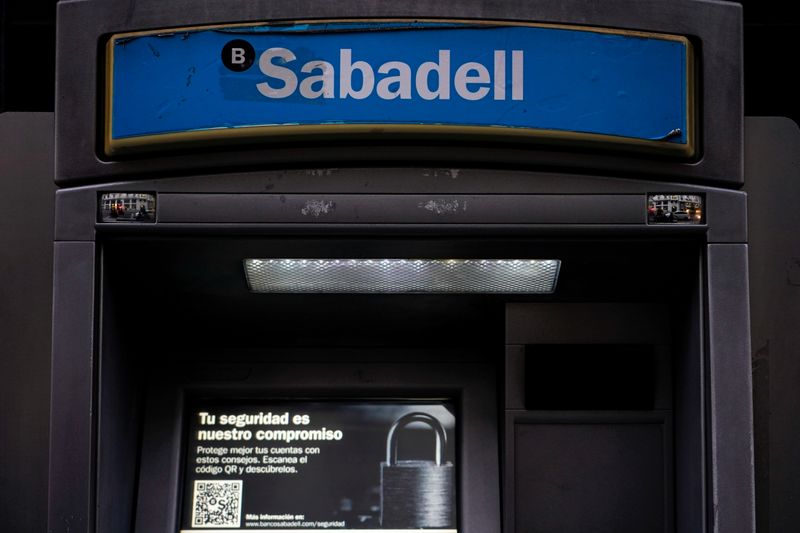 © Reuters. FILE PHOTO: Sabadell bank's logo is seen at an ATM machine outside one of the bank's branches in Madrid

By Jesús Aguado and Iain Withers

MADRID/LONDON (Reuters) – Sabadell is considering more job cuts and striking product distribution alliances with other European banks after merger talks with rival BBVA (MC:BBVA) fell through last week, according to four sources with knowledge of the matter.

Shares in the mid-sized Spanish lender slumped after the pair failed to agree on the price of their transaction, with investors now worried about Sabadell's ability to handle the expected pick-up in bad loans in the wake of the COVID-19 crisis if it goes it alone.

Sabadell has said it is considering selling its British unit TSB, but sources said fresh cost saving measures are also under consideration.

Two sources familiar with the bank's strategy said Sabadell would try to strike alliances with other lenders in Europe in segments such as consumer and insurance services. Two further sources told Reuters the bank was also considering additional job cuts of up to 2,000 people in Spain in 2021 on top of its already announced 1,800 job cuts.

Bankers warn though that Sabadell's options are limited, and additional cost saving measures may only buy it time until it is forced to again consider merging with a larger rival.

"Sabadell has been caught in some kind of nowhereland. It is too small to play a role with the big Spanish players but bigger than most of the regional lenders," a banking source said, adding that non-performing loans in the corporate sector could start to rise once support measures to cope with the impact from COVID-19 are lifted.

Spanish broker Alantra has said that BBVA and Sabadell might resume M&A talks at some point next year once BBVA's sale of its unit for $11.6 billion in cash to PNC Financial Services Group (NYSE:PNC) is expected to be closed.

Sabadell and BBVA declined to comment on this option.

Differences between BBVA and Sabadell over the value of TSB – a mid-sized UK bank bought by Sabadell in 2015 for 1.7 billion pounds ($2.29 billion) – were partly to blame for merger talks breaking down, a source directly aware of the talks said.

"The market and BBVA were putting a zero valuation on TSB," this source said, adding that the valuation could be higher and even close to 1 billion euros depending on whether a potential domestic buyer could generate cost-savings.

BBVA did not want to pay more than 2.5 billion euros for Sabadell, while Sabadell was not willing to accept anything less than 3 billion euros, the source said, with the difference partly down to TSB.

Sabadell is aiming to sell the loss-making British unit in the first quarter, which was hobbled by major IT problems two years ago. But it finds itself in a crowded market with rival domestic lenders the Co-op Bank and the financial services arm of supermarket giant Sainsbury's also for sale.

Analysts say TSB has been put on a surer footing by CEO Debbie Crosbie, who pushed through a restructuring programme after joining last year, although it racked up pre-tax losses of 209 million euros over the nine months to September.

A spokesman for TSB declined to comment on Sabadell's negotiations, but added: "We've seen good momentum in underlying business growth and have accelerated the delivery of our strategy, including taking full control of our IT, delivering a right-sized modern branch network and reducing overall operating costs."

Sabadell says it expects TSB to break even in 2021.