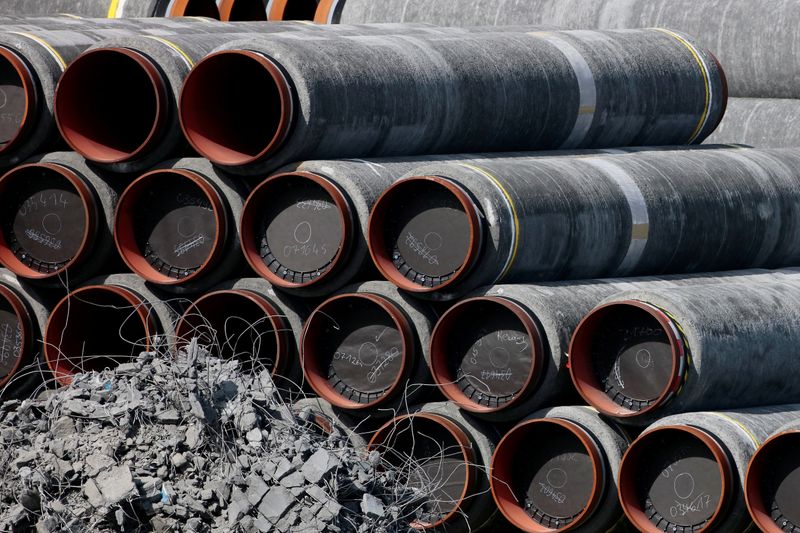 The $11 billion Nord Stream 2 project, led by Russian state energy company Gazprom (MCX:GAZP) and aimed at doubling the existing pipeline's capacity, is more than 90% complete. Russia says the project to deliver gas under the Baltic Sea to Europe via Germany will begin operating next year.

But President Donald Trump's administration, which is eager to offer Europe U.S. shipments of gas, and many U.S. lawmakers oppose the pipeline. They say the project, which would bypass Ukraine, depriving it of lucrative transit fees, would boost Moscow's economic and political leverage over Europe.

The NDAA is expected to be passed by the U.S. House of Representatives early next week and soon after by the Senate. Trump has vowed to veto the bill over a bipartisan provision to strip the names of Confederate military leaders from U.S. bases.

But vetoing the massive bill would carry significant political risk. If Trump vetoes the legislation and Congress upholds his veto, it would end a 59-year streak of passing the NDAA.

"These sanctions significantly toughen existing provisions … to cover critical components of the pipeline project," said a U.S. official familiar with the process of crafting sanctions on Nord Stream 2 and who spoke on condition of anonymity.

Backers say the sanctions will deprive Russia of the capability to upgrade Gazprom's vessel, the Akademik Cherskiy, to lay the type of pipe used in the project, required insurance, and necessary certifications.

"Without any of this, they are just not going to be able to finish the pipeline," said Daniel Vajdich, president of Yorktown Solutions, a lobbyist for Ukraine's state energy company Naftogaz, which opposes the project.

The Kremlin said the threat of new U.S. sanctions was a sign of unfair competition and promised Russia would defend its interests and commercial projects.

Nord Stream 2 did not immediately respond to a request for comment. The company said last month the sanctions would directly or indirectly hit about 120 companies from more than 12 European countries and that it was up to governments and the European Commission to protect them from "illegal extraterritorial sanctions."

Only a final stretch of about 100 miles (160 km) in Danish waters needs to be completed, but the work is complicated by unexploded World War Two bombs on the seabed in the project's path.

In addition, fear of sanctions has led important companies doing work necessary for the project to drop out. Last month Norway's DNV GL, a company that had been monitoring the testing and preparation of equipment used by ships to lay the pipeline, suspended work.

In September, the world's largest group of shipping insurers said they would not insure vessels involved in Nord Stream 2. Associations belonging to the International Group of Protection and Indemnity Clubs, including the Shipowners' Club and the London P&I Club, said they would not provide coverage for any activity involving the Nord Stream 2 or TurkStream, a pipeline project to bring Russian gas to Turkey.