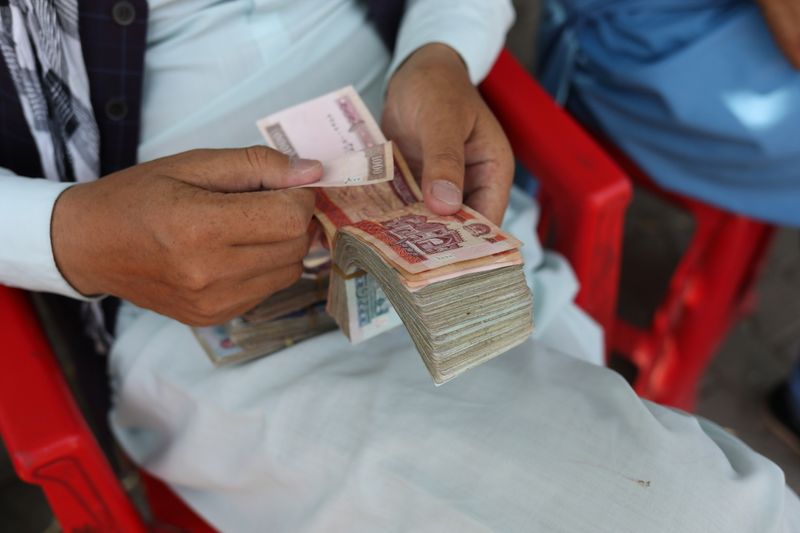 By John O’Donnell and Rupam Jain

FRANKFURT/MUMBAI (Reuters) – Afghanistan’s banks are running out of dollars, and may have to close their doors to customers unless the Taliban government releases funds soon, three people with direct knowledge of the matter said.

The cash squeeze threatens to upend the country’s already battered economy, largely dependent on hundreds of millions of dollars shipped by the United States to the central bank in Kabul that make their way to Afghans through banks.

One month since the Taliban captured the capital of Kabul, bankers fear fewer dollars could inflate the cost of food or electricity and make it harder to afford imports, spelling further misery for Afghans.

Although the cash crunch has lasted weeks, the country’s banks have in recent days repeatedly underlined their concerns to the new government and central bank, two of the people said.

Banks have already pared back services and imposed weekly $200 payout limits amid a run on savings, with long queues outside branches as people try to get hold of dollars.

The hobbling of the central bank, whose foreign reserves were frozen after the Taliban took charge, could also hamper efforts of the international community to support Afghans.

Commercial banks have appealed to the central bank in recent days to free up the supply of U.S. dollars.

But they have yet to get an answer to their requests and are concerned that the government’s vaults, in the presidential palace and headquarters of the central bank, are so empty that it may be in little position to help.

“We are left with liquidity of a few days’ payments only,” said one of the people with direct knowledge of the matter. “If the government does not react to the situation immediately, there will be demonstrations and violence.”

In a statement on its website on Wednesday, the central bank’s acting governor said banks were stable.

“The banks are completely secure,” he said, adding that commercial banks usually kept 10% of their capital as cash and that those in Afghanistan, on average, held 50% as cash.

The central bank did, however, urge Afghans to use the local currency. It also posted a photograph of cash it said was part of a haul of millions of dollars and gold bars retrieved from former government officials.

Senior international officials who were overseeing the Afghan economy painted a bleaker picture in a confidential report written in recent days and sent to aid agencies.

“The liquidity crisis … has disrupted supply chains and halted flow of money and goods,” said the officials in the report seen by Reuters, warning that the economy could shrink by a third if the banking crisis was mishandled.

It is, however, unclear how much cash the government has to release. “The Taliban inherited a central bank with depleted USD and AFN cash reserves,” the report said.

Some banks were taken aback when the central bank appeared to be short of dollars around the time of the fall of Kabul, because they had understood it had substantial dollar reserves in its vaults, three of the sources Reuters spoke to said.

The speed of the Taliban’s victory, hastened by the final withdrawal of foreign troops from the country, took even them by surprise and compromised the chances of a smooth transition.

Ajmal Ahmadi, the previous central bank governor who fled the country, said earlier that almost all of central bank’s roughly $10 billion were held abroad. He did not respond to requests for comment.

Russia’s embassy in Kabul said ousted Afghan President Ashraf Ghani fled the country with four cars and a helicopter full of cash and had to leave some money behind as it would not all fit in, the RIA news agency reported.

Donors have pledged more than $1.1 billion to help Afghanistan, where poverty and hunger have spiralled since the Taliban took power, and foreign aid has dried up.