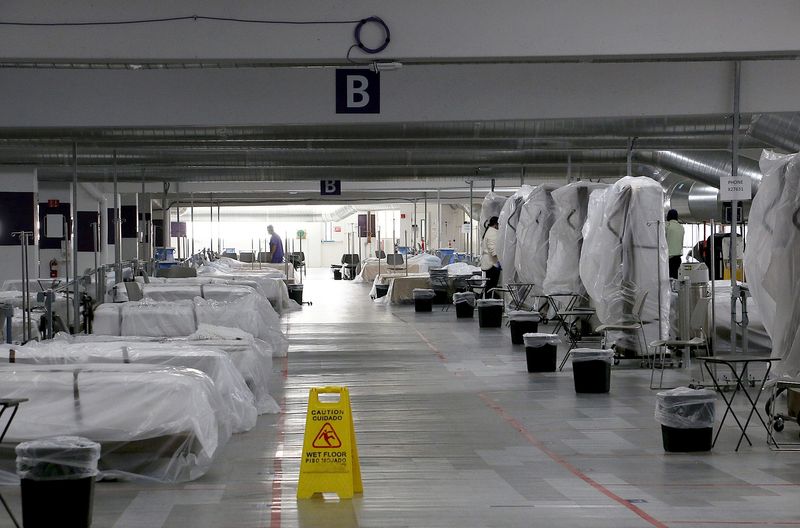 © Reuters. Back-up hospital beds are seen in the parking garage at the Renown Regional Medical Center 2/2

WASHINGTON (Reuters) -A mounting U.S. death toll has tempered enthusiasm about the coming COVID-19 vaccine with 9/11-like fatalities projected every day for the months ahead, even with a rapid rollout of inoculations, which could start as soon as Monday.

Another 2,902 U.S. deaths were reported on Thursday, a day after a record 3,253 people died, a pace projected to continue for the next two to three months until the vaccine can be widely distributed.

Those daily tolls are roughly equivalent to the 2,996 killed in the attacks of Sept. 11, 2001, and greater than the 2,403 killed in the 1941 attack on Pearl Harbor – traumatic events that reshaped the United States for years.

"Probably for the next 60 to 90 days, we're going to have more deaths per day than we had on 9/11 or we had at Pearl Harbor," Dr. Robert Redfield, director of the U.S. Centers for Disease Control and Prevention, told the Council on Foreign Relations on Thursday.

"The reality is the vaccine approval this week is not going to really impact that, I think, to any degree for the next 60 days," Redfield said.

The U.S. Food and Drug Administration moved ever closer approving emergency use of the coronavirus vaccine developed by Pfizer (NYSE:PFE) with its German partner BioNTech. [

"The FDA informed Pfizer that they do intend to proceed towards an authorization for their vaccine," Health and Human Services Secretary Alex Azar told ABC News on Friday.

"We will work with Pfizer to get that shipped out so we could be seeing people getting vaccinated Monday or Tuesday," Azar said.

Britain and Canada have already approved the Pfizer vaccine, and the U.S. advisory panel is due to review a second vaccine, from Moderna (NASDAQ:MRNA) Inc, next week. Other vaccine candidates are in the works.

Healthcare workers, first responders and nursing home residents are expected to receive the first doses, but a wider rollout faces significant logistical challenges to meet President-elect Joe Biden's goal of inoculating 100 million people within 100 days of his inauguration on Jan. 20.

"It's not going to be like a light switch on and off. It's going to be more like a dimmer switch," said Dr. Mark Mulligan, director of the NYU Langone Health Vaccine Center and a lead investigator for the Pfizer trials.

Dr. Michael Osterholm, a member of Biden's coronavirus advisory board, told CNN it would be several months before the nation sees widespread availability of vaccines.

Then there is the American skepticism about vaccines, with only 61% saying they are open to getting vaccinated, according to a Reuters/Ipsos poll.

Moreover, American women, who traditionally make most of the healthcare decisions in their families, are more wary than men as the survey showed 35% were "not very" or "not at all" interested in getting a vaccine.

In the meantime, grim statistics continue to pile up as the United States recorded more than 200,000 cases per day for four straight days with another 220,815 cases on Thursday, according to a Reuters tally of official data.

The United States has so far reported about 15.60 million cases and 292,642 deaths by Thursday.

That death toll is likely to top 500,000 by April, according to the model developed by the University of Washington's Institute for Health Metrics and Evaluation. Deaths could be limited to an estimated 482,000 with a rapid vaccine rollout, but could also soar to nearly 600,000 if more state and local governments ease mandates to wear masks.