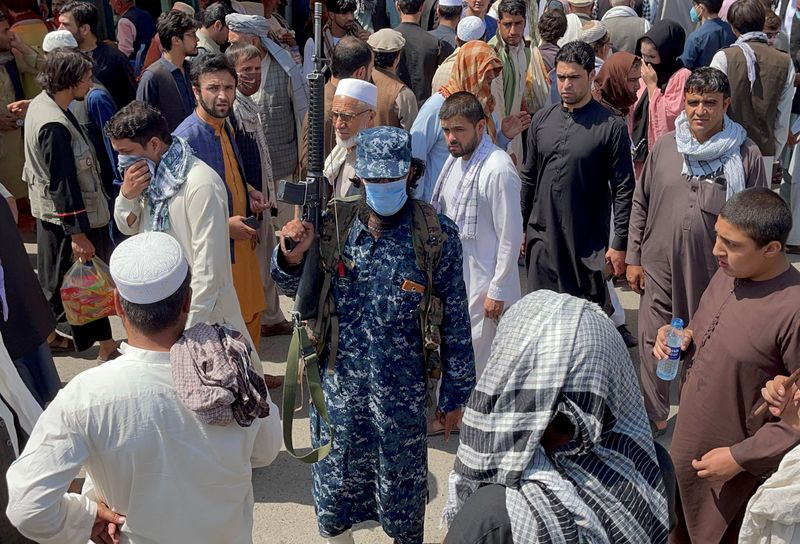 © Reuters. FILE PHOTO: A member of Taliban security forces stands guard among crowds of people walking past in a street in Kabul, Afghanistan September 4, 2021. REUTERS/Stringer

MOSCOW (Reuters) – Russia, China, Pakistan and other regional states called on the United States on Friday to engage with the Taliban and fund aid to Afghanistan, though they also urged the former insurgents to yield power to a more inclusive government.

The fate of Afghanistan dominated a summit of the Shanghai Cooperation Organisation, formed 20 years ago as a talking shop for Russia, China and ex-Soviet central Asian states, but which has lately expanded into a bloc with wider regional ambitions. India and Pakistan joined in 2017, and Iran joined on Friday.

Leaders of the group said it was the responsibility of the West in general and the United States in particular to help avert a humanitarian disaster in Afghanistan, where Western aid propped up the government swept away by the Taliban last month.

“The main part of the expenses related to Afghanistan’s post-conflict rebuilding should be borne by the United States and NATO countries who are directly responsible for the grave consequences of their prolonged presence in the country,” Russian President Vladimir Putin said.

He called on Washington to unfreeze assets of the Afghan central bank, which have been blocked since the Taliban takeover, saying without access to the funds, Afghanistan’s new rulers would be tempted to turn to the drugs and arms trades.

China’s President Xi Jinping, without mentioning the United States by name, said “certain countries” should assume their due responsibilities for Afghanistan’s future development, having been “instigators” of the situation.

Imran Khan, the prime minister of Pakistan which has the closest ties to the Taliban of any neighbour, said the priority was to “prevent a humanitarian crisis and an economic meltdown. We must remember that the previous government depended heavily on foreign aid and its removal could lead to economic collapse.”

The main base of Taliban support, Pashtuns comprise less than half of Afghanistan’s population. Most of the other major ethnic groups have close linguistic and ethnic ties to Shanghai Organization members such as Iran, Tajikistan and Uzbekistan.

Pakistan’s Khan said the Taliban should create an “inclusive political structure” representing of all ethnic groups, and prevent Afghan soil from being used for international militancy.

Putin noted that the new government was only provisional. “One cannot call it representative or inclusive, as we do not see representatives of other ethnic groups there. But we believe we need to work with it.”