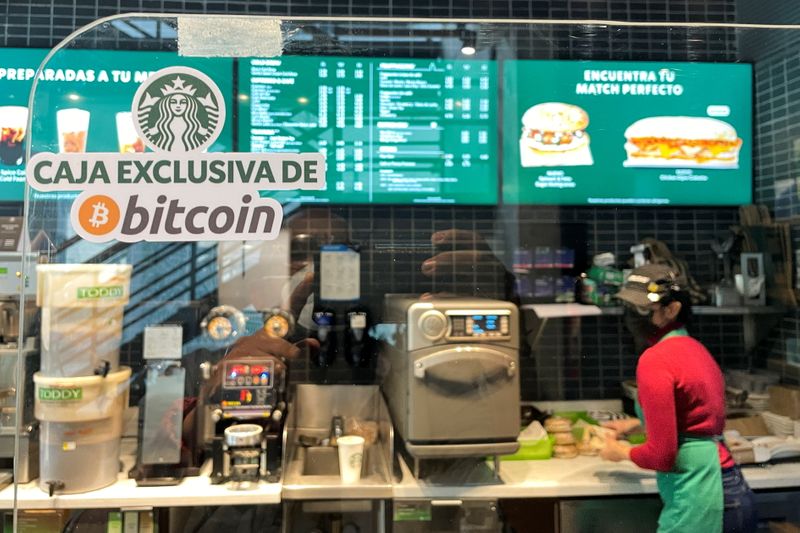 © Reuters. A sign reads: “Exclusive Bitcoin register” in a Starbucks store where the cryptocurrency is accepted as a payment method, in San Salvador, El Salvador September 7, 2021. REUTERS/Jose Cabezas

SAN SALVADOR (Reuters) -El Salvador’s President Nayib Bukele stepped in on Wednesday to closely manage the fraught roll-out of a payments app that underpins the nation’s adoption of bitcoin as legal tender, and called on users to report any problems on his Twitter (NYSE:) feed.

Adopting language similar to IT departments in offices around the world, Bukele asked users to close and restart the app if a “currently under maintenance” error screen appeared.

The historic adoption of bitcoin as legal tender by the Central American country has been beset by teething problems that have contributed to a rout in the value of the digital currency globally https://www.reuters.com/technology/bitcoin-bruised-after-chaotic-debut-legal-tender-el-salvador-2021-09-08.

That has not stopped some bullish forecasts about its future, with a new cryptocurrency research team at Standard Chartered (OTC:) predicting bitcoin will hit $100,000 https://www.reuters.com/technology/standard-chartered-sees-bitcoin-hitting-100000-by-early-next-year-2021-09-08 by early next year and could be worth as much as $175,000 longer-term.

Bukele has sent a stream of Twitter messages over the past 36 hours instructing users on how to download the government-backed Chivo app which promises commission-free transactions and which his administration hopes will be adopted by the unbanked.

Overnight the president said the app, a digital wallet, was being disconnected for the second time to “improve user experience and the problems it had during the day.”

“We hope that tomorrow will be much better,” he wrote in a tweet.

The app’s roll-out appears to have created a buzz in El Salvador, in part due to a government handout of $30 in bitcoin to every local user who signs up, and despite polls that show many people are wary of bitcoin’s volatility.

On the El Salvador edition of Apple (NASDAQ:)’s App Store, Chivo was the No. 1 downloaded financial app on Wednesday.

Global retailers operating in El Salvador were accepting bitcoin at some stores, including McDonald’s Corp (NYSE:) and Starbucks Corp (NASDAQ:), along with several local outlets.

Bukele, 40, who is doing well in opinion polls but has been accused of eroding democracy https://www.reuters.com/world/americas/central-american-aides-judges-former-presidents-us-corruption-list-2021-07-01, is a heavy user of social media to govern and engage with the population.