We like to keep tabs on Oracle (NYSE:) for many reasons including the fact it reports almost precisely between the peaks of earnings cycles. In our view, this makes Oracle one of the last to report calendar second-quarter earnings and one of the first to report calendar third-quarter earnings and a potential bellwether for the market. The Q1 results were good but mixed in regards to the analyst estimates and raised a red flag for investors.

The problem is not that Oracle’s business is fundamentally ailing, it’s that results and outlook have begun to fall short of the consensus estimates and that is a recipe for lower share prices. What this means for Oracle investors is that now may be a good time to lighten up on some of those shares. What it means for those who want to invest in Oracle is that a better price may soon be at hand.

Oracle Is Leveraging The Cloud

Oracle has been working hard over the past few years to leverage the cloud and reinvigorate the business. Those efforts have been paying off with cloud-based revenue topping 75% of the net. The bad news is that the $9.73 billion in consolidated revenue, which was good for a gain of 3.8% over last year, missed the consensus estimate. The miss is worth a slim 40 basis points but is huge in the eyes of a market expecting outperformance and positive guidance. On a two-year basis, revenue was up about 4.5% while on an FX neutral basis, the company performed above guidance.

On a segment basis, all segments performed positively in the quarter with the new core cloud-based revenue up 6% over last year. Within that, the companies two new cloud businesses, Fusion ERP and NetSuite ERP, grew 32% and 28% respectively, and accounted for 25% of the net revenue by themselves. Moving down the report, the news gets even better. The company’s GAAP and adjusted margins both exceeded consensus enough to drive solid results on the bottom line. The GAAP EPS of $0.86 beat the consensus by $0.03 while the adjusted $1.03 beat the consensus by $0.06.

The company did not give guidance for the coming quarter or for the full year but the analyst consensus is positive. The caveat is that the analysts are expecting tepid year-over-year growth and margin pressure, and there is downside risk in the estimate now that Oracle failed to meet the Q1 estimate. That’s not good for Market sentiment.

Marketbeat data reveals that four analysts have come out so far with commentary concerning Oracle’s Q1 results. They, along with the bulk of the analyst community, view the stock as a hold but are beginning to turn a little bit bearish. One of our four analysts altered their rating from Positive to Sell albeit with a slightly increased price target. All four analysts raised their price target bringing the broad consensus to $78.50 or about 12% below the recent price action. The high price target of $100 assumes about 12% upside but maybe the top for this market if it’s reached at all.

The Technical Outlook: Oracle Is Ripe For A Fall

Oracle isn’t ridiculously valued at 19X earnings but with earnings growth in question, the stock could be in store for a revaluation. The Q1 results have shares down more than 3% in early action and are at risk of breaking near-term support. Support is coincident with the 30-day moving average and could lead to a quick correction in share prices if breached. If price action moves below the short-term moving average it could fall as much as 20% before hitting firm support at the long-term uptrend line. The indicators are mixed but momentum is bearish and stochastic is set up to confirm a downward movement with today’s open. 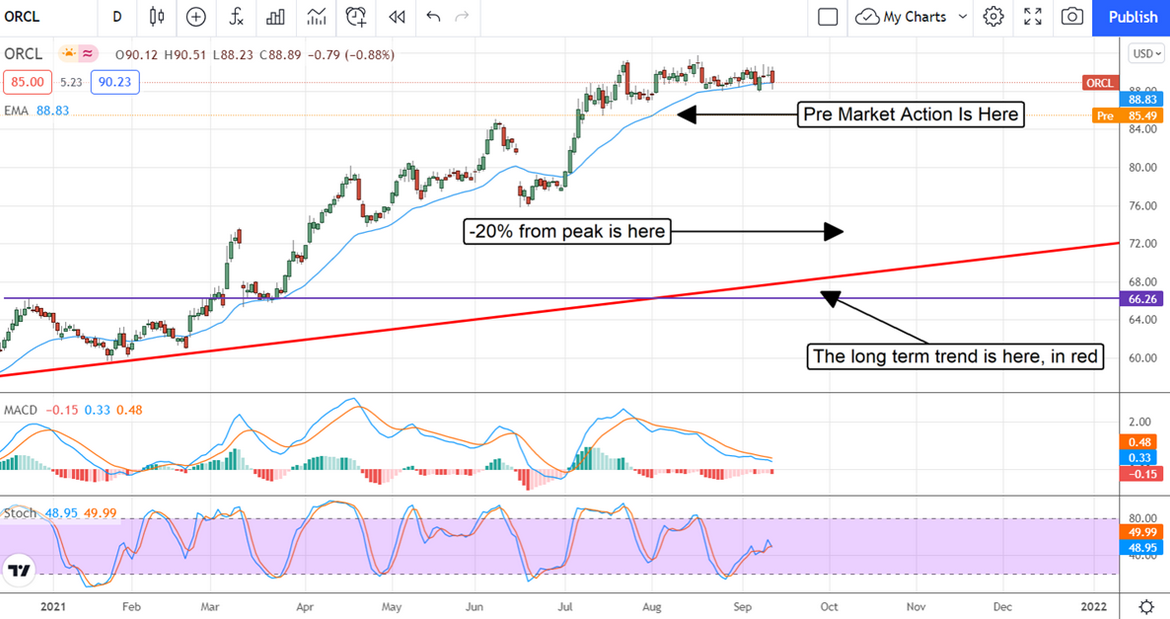