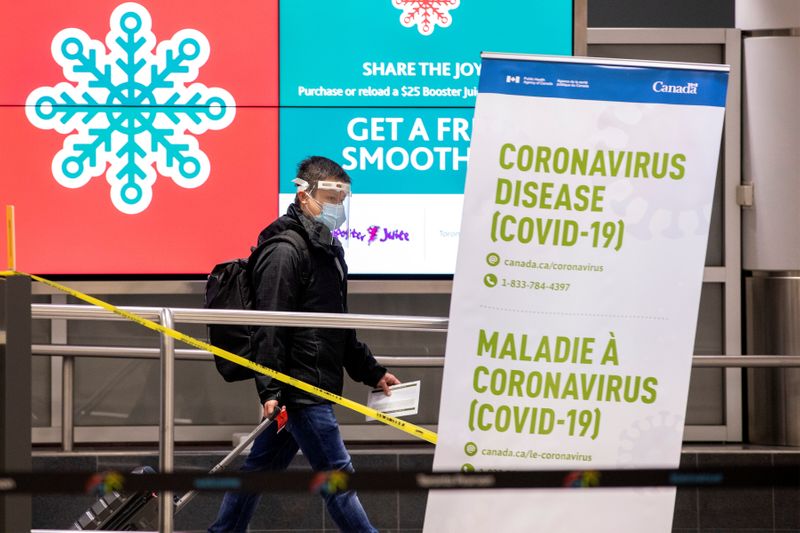 © Reuters. FILE PHOTO: A man walks through terminal 3, amid a spike in coronavirus disease (COVID-19) cases, at Pearson airport

TORONTO (Reuters) – Ontario has the fiscal capacity to support its economy during the coronavirus pandemic, the new finance minister of Canada's most populous province told Reuters on Tuesday, adding that debt sustainability is a priority for another time.

"The fiscal sustainability of this province is a focus of ours in the long term but right now what's important is that we protect the health and well being of people," Peter Bethlenfalvy said in an interview.

"We have the capacity to provide the fiscal firepower to keep Ontarians safe," said Bethlenfalvy, who also serves as President of the Treasury Board and has previously worked for financial sector firms, including Manulife Financial (NYSE:) Corp and TD Securities.

Ontario, one of the world's largest sub-sovereign borrowers, projected in November a record budget deficit of C$38.5 billion ($30.4 billion) for 2020-21 and additional shortfalls over future years as it raised pandemic-related spending.

The yield on Ontario's 10-year bond has fallen by about 80 basis points since last March to 1.34%, helped by Bank of Canada interest rate cuts and a program by the central bank to buy provincial bonds.

Much like the rest of Canada, Ontario has seen a resurgence in coronavirus infections. It began a lockdown on Dec. 26 to curb the spread of the virus, which is likely to weigh on the economy.

The province has been using contingency funds set aside in the November budget, Bethlenfalvy said, adding that he has spoken since his appointment to Canadian Finance Minister Chrystia Freeland about the prospect of increased transfers from the federal government to fund healthcare.

"We have been very clear about the Canada health transfers to help support our top priority, which is our health system," said Bethlenfalvy. "We have an aging population, we have a pandemic."