Despite a selloff on the final day of the month, stocks surged strongly in November as investors bet heavily that vaccines may conquer the COVID-19 virus and will let life, as most of the world knew it a year ago, resume.

The November rally, accompanied by a big boost for Boeing (NYSE:BA) shares after the aeronautics giant's 737 MAX airliner won regulatory approval to resume commercial flights, pushed the major averages to new highs during the Thanksgiving week. 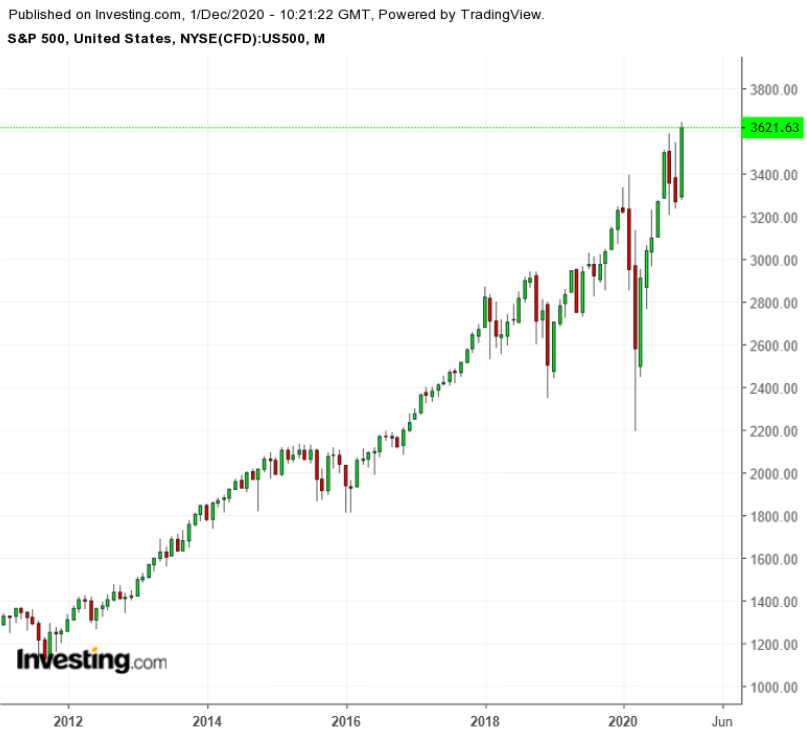 Shares pulled back on Monday, partly on profit-taking as well as worries about the near-term:

What does seem certain: interest rates will remain low. The Federal Reserve has all but guaranteed it. The 10-year Treasury yield of 0.84% was off about 1.9% for the month and still down 56% for the year. That's good for initial public offerings, home buying and building, some startups and stocks.

So, stocks should remain at least stable in December and probably into January, barring a huge shock to the global financial system.

How The November Rally Erupted

The rally started with four days of big gains as excitement built about the progress on vaccines and the election outcome, which produced a mixed result. Biden won but Republicans saw gains on down-ballot elections, signaling there wouldn't be a Democratic sweep. The mixed result propelled the market higher with the Dow, S&P 500, NASDAQ Composite, Russell 2000 and Dow Jones Transportation Average ultimately reaching new highs during the Thanksgiving holiday week.

Other indices also saw double-digit gains, but the boost wasn't quite as big as those seen in April when the first surge of the virus started to ease.

The clear catalysts were extremely positive vaccine trial results announced by the partnership of Pfizer (NYSE:PFE) and the German biotech BioNTech (NASDAQ:BNTX), Moderna (NASDAQ:MRNA) and a partnership of the United Kingdom's AstraZeneca (NASDAQ:AZN) and Oxford University.

Shares of Moderna and BioNTech saw big gains in November, 126% and 45.5% respectively. (The BioNTech gains were for US-listed shares.)

The vaccine news suddenly made airline, hotel and restaurant stocks interesting again—at least until there were clear signs that a COVID-19 resurgence was spreading across the world. 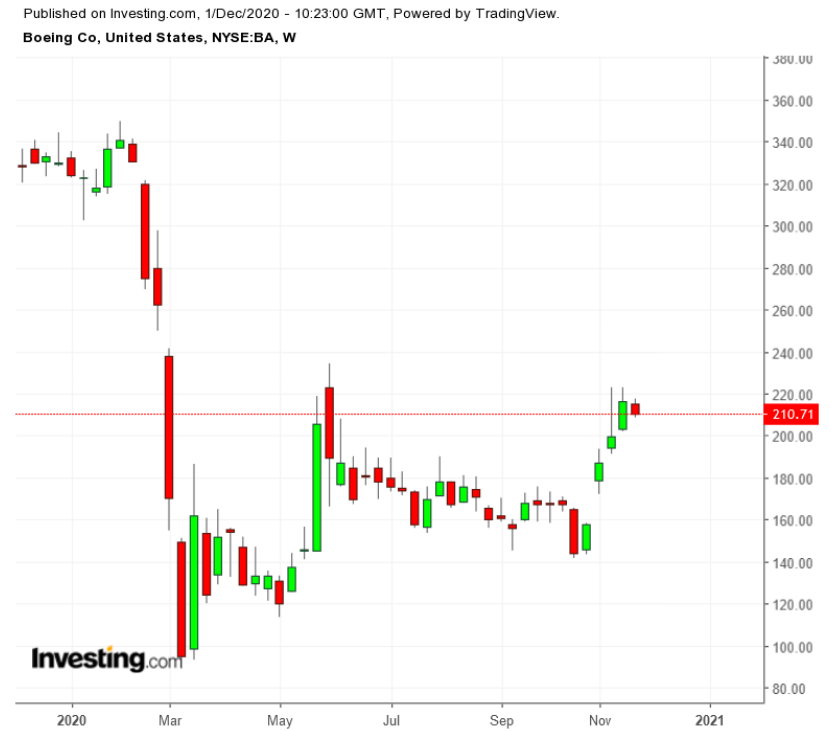 The Dow got an extra jolt from the recertification of Boeing's 737 MAX jet. Shares of the Chicago-based aviation company ended up nearly 46% for the month. Still, Boeing is down 35% on the year and down 53% from its February 2019 peak.

A curious performance note: the NASDAQ 100, an index dominated by key tech stocks like Apple (NASDAQ:AAPL), Microsoft (NASDAQ:MSFT), Amazon (NASDAQ:AMZN), Google-parent Alphabet (NASDAQ:GOOGL) and Tesla (TSLA) was up 11% in November, which is hardly chump change. However, it has not hit a new 52-week high since Sept. 2. 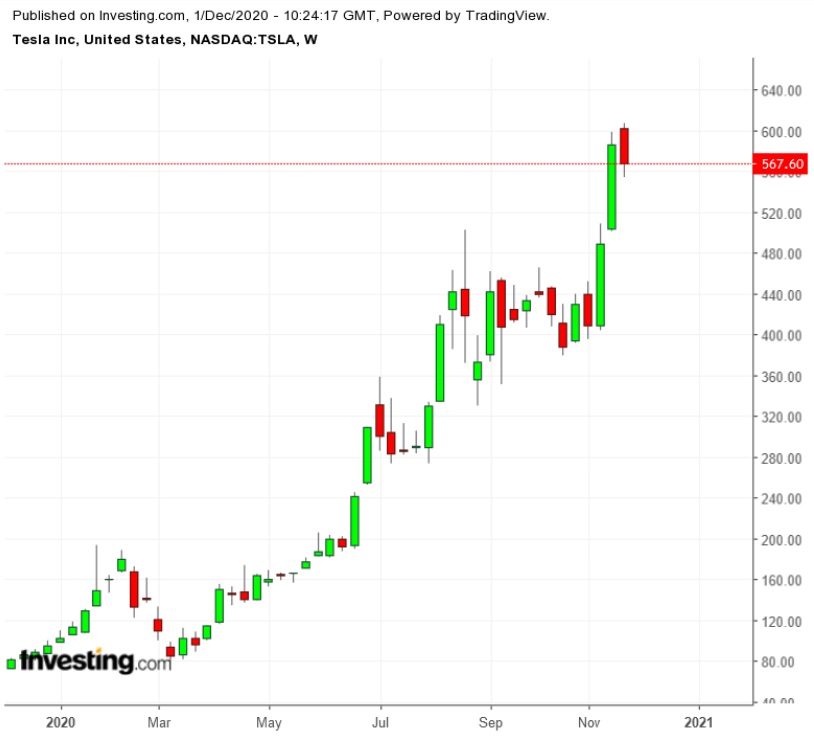 Nonetheless, the electric-vehicle maker is still up 578% for the year. Its market capitalization of $538 billion is about 60% larger than that of Ford (NYSE:F), General Motors (NYSE:GM), Honda (NYSE:HMC) and Toyota (NYSE:TM) combined.

Tesla is creating volatility in the S&P 500 as it will join the SPX on Dec. 21. Because of its hefty market value, adding the stock to the S&P 500 will require a massive reweighting of the broad index, as well as portfolio rebalancing for all funds that track the index, which is expected to create a flurry of trading during the two days ahead of the event.

Shift Away From Glamour Stocks

During November, for the most part, investors moved money away high-profile marquee stocks like Apple, Microsoft, Netflix (NASDAQ:NFLX) and Facebook (NASDAQ:FB), into chip stocks for example and retailers such as Costco (NASDAQ:COST), up 9% for the month and 33% on the year, and Target (NYSE:TGT) up 17% for the month and 40% for the year.

Among the biggest winners: stocks from downtrodden segments of the market, including airlines, metals and energy companies. US Steel (NYSE:X) hit a 52-week high on Friday and was up 47% for the month and 24% on the year. Shares of aluminum producer Alcoa (NYSE:AA) were up 54% for the month, though down 7% for the year.

In November, United Airlines Group (NASDAQ:) was up 33%. American Airlines Group (NASDAQ:AAL) rose 25.2% for the month but fell 5.7% after JetBlue Airways (NASDAQ:JBLU) shares slumped 4% when the carrier warned its fourth-quarter revenue could drop as much as 70% from a year ago because of rising COVID-19 cases. Airlines continue to face a precarious future, ever since the pandemic gutted airline traffic.

Crude's gains reflected a recovery from the March panic that sent West Texas Intermediate to less than $20 a barrel before the market bottomed. Brent briefly touched $15.98.

As the pandemic eased into the spring and summer, oil demand seemed to pick up and so did prices. Even US oil drilling showed signs of life. The US oil rig count, according to Baker Hughes in its most recent report, stood at 241. That is down about 64% from a year ago, but up 40% from its mid-August bottom of 172.

The world of initial public offerings (IPOs) should be commanding much more attention than it has this year. So take note: the new offering market is hot and may be good for stocks overall.

Renaissance Capital data show 193 companies have gone public this year, the most active year since 2014. 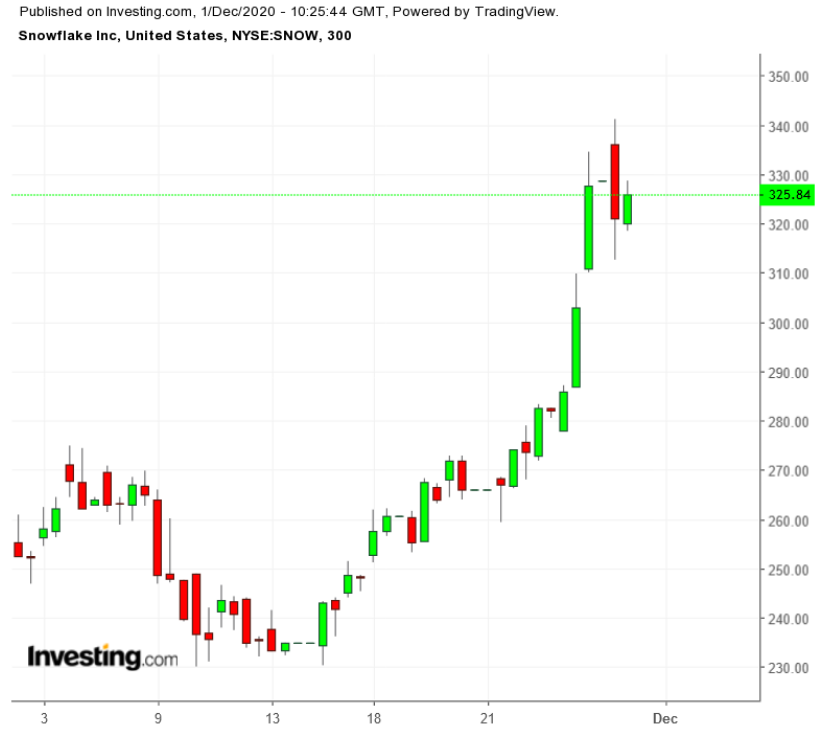 Among the best-known IPOs this year are:

Special Purpose Acquisition Companies (SPACs) have been equally active. These sell shares and warrants to investors. The sponsor then goes out to buy private companies, which then become public. So far, 200 companies have been purchased this way.

The deals require a guaranteed return of investor money if no deal occurs.

Among the biggest SPACs so far:

Low interest rates and the quest for big returns are major reasons for all this activity, and the pipeline for IPOs is the biggest in 20 years, according to Renaissance, which tracks the market. The company estimates companies going public have raised $68.6 billion in funding, up 57% from a year ago.

Many investors are looking forward to seeing how well vacation-rental company Airbnb's IPO fares when it comes to market in mid-December. It may have a valuation of as much as $30 billion. Though Airbnb says its revenue is increasing rapidly after the massive pandemic hit, the vacation-rental company adjusted by cutting costs and promoting offerings to customers who wanted to avoid flying to get to a vacation destination. Still, has never posted a full-year profit since its 2008 founding.

There are also many biotech companies looking to go public and like Moderna, generate huge gains. Of course, biotechs can be a bit of a crapshoot. Though a public listing helps them get capital to fund research, there's never a guarantee a viable product will emerge. Then again, as Moderna shows, a successful product can generate huge gains for investors.

Because historically November, December and January have been the best three-month period for stocks, there's cause for optimism even with a change in the US Presidential administration.

Interest rates may remain low so investors should be buying ahead of a global recovery, assuming the coronavirus vaccines are available and effective.

Bear in mind though that, there's a strong potential the pandemic will worsen before the vaccines become widely available and this may weigh on stocks. There is also a risk equity prices will become overheated, especially if there's heavy buying of mega caps such as Apple, Alphabet and Tesla. That happened a year ago until the market peaked in late January 2020.

Nonetheless, there probably should be some concern about the falling dollar. US Dollar Index Futures dropped 2.3% in November and are down 4.4% on the year. The dollar soared in March and early April when the pandemic created panic in financial markets but has retreated nearly 9% since.

There's also a nagging worry that the Biden administration, the Senate and the House won't be able to agree on a stimulus package to support those many sectors of the economy suffering from the pandemic, especially hotels, restaurants, the travel industry and commercial real estate. Lack of additional fiscal aid to American consumers would have a significant impact on the retail sector as well.

All of which might force the Federal Reserve to add support to the economy until it's clear the availability of vaccines can produce an economic rebound.