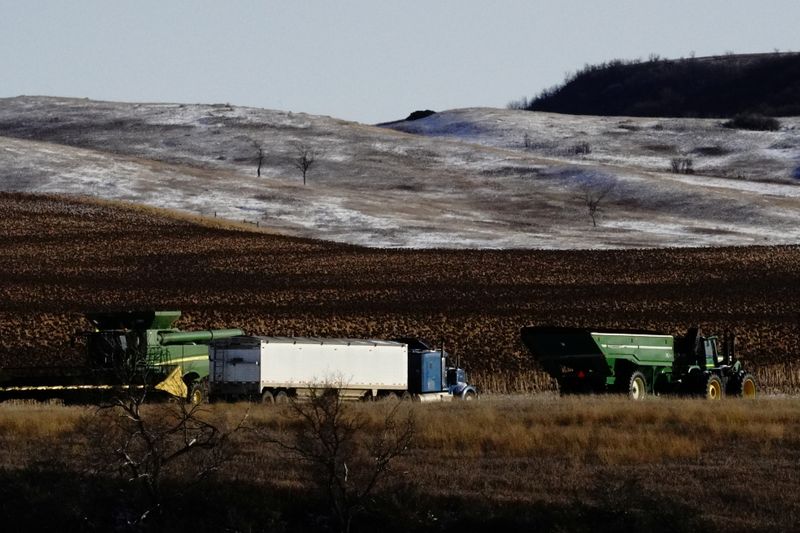 © Reuters. FILE PHOTO: An agricultural combine, tractor and trailer, and semi truck are parked alongside corn fields during the fall harvest as the coronavirus disease (COVID-19) outbreak continues in Livonia 2/2

By Karl Plume and Rod Nickel

CHICAGO/WINNIPEG, Manitoba (Reuters) – Beer made from rice grown with less water, rye planted in the off-season and the sale of carbon credits to tech firms are just a few of the changes North American farmers are making as the food industry strives to go green.

The changes are enabling some farmers to earn extra money from industry giants like Cargill, Nutrien (NYSE:NTR) and Anheuser-Busch. Consumers are pressuring food producers to support farms that use less water and fertilizer, reduce greenhouse gas emissions and use more natural techniques to maintain soil quality.

Investments in sustainability remain a tiny part of overall spending by the agriculture sector, which enjoyed healthy profits in 2020. They may help to head off more costly regulations down the road now that Democratic climate advocate Joe Biden was elected U.S. president.

Some companies, like farm retailer and fertilizer producer Nutrien , are also opening new revenue potential for farmers by monetizing the carbon their fields soak up. The companies say technology is improving measurement and tracking of carbon capture, although some environmental activists question the benefit of such programs and how sequestered greenhouse gas volumes can be verified.

Sustainable techniques farmers are adopting include refraining from tilling soil at times to preserve carbon. Some are adding an off-season cover crop of rye or grass to restore soil nutrients instead of applying heavy fertilizer loads over the winter that can contaminate local water supplies.

A study conducted by agriculture technology company Indigo Ag estimated that if U.S. corn, soy and wheat farmers employed no-till and cover crops on 15% of fields, they would generate an additional $600 million by reducing costs, bolstering soil productivity or selling carbon credits.

Bill Jones, the brewer's manager of raw materials, said farmers voluntarily growing rice with a lower environmental impact along the sensitive Mississippi River would be less disruptive to supplies than having local authorities require such practices by legislating changes to water and nitrogen use.

"We look at supply chain security. I see this gaining traction," he said, noting that Minnesota and other U.S. states and conservation districts worried about polluting the Mississippi are already introducing limits on how much manure farmers can spread on fields.Arkansas farmer Carson Stewart used the program for the first time this year, earmarking his entire 340-acre rice crop to Anheuser-Busch. Depending on milling quality, his rice may earn up to $1.50 a bushel more than conventional rice, a premium of about 27%, he said.

"They come with high up-front costs," said Giana Amador, managing director at climate-focused NGO Carbon180. "We're seeing a huge differentiation in quality among all these corporate commitments."In September, privately held Cargill Inc said it would help North American farmers shift 10 million acres to regenerative practices during the next 10 years by offering them financial support and training.

Pushed by demand for greener foods from food companies that buy its products, Cargill has already signed up 750 farmers to green programs, representing 300,000 acres, said Ryan Sirolli, Cargill's director of row crop sustainability. With projects like one that pays Iowa farmers to leave soils untilled or to create field buffers to prevent fertilizer runoff, Cargill hopes to cut 30% of its supply chain greenhouse gas emissions over the next decade.

"We've done a lot to stop soil erosion. And we've had a reduction of 538 tons of CO2, which is the equivalent of taking 104 passenger cars off the road," said Iowa farmer Lance Lillibridge, who estimates he will earn about $37 an acre in a Cargill pilot project this year.

Environmental groups and consumer activists are sceptical about such corporate sustainability pledges, noting that Cargill has not made good on its promise to eliminate deforestation from supply chains by 2020.

Some farmers are making money by verifying the amount of climate-warming emissions their fields soak up and selling carbon credits to polluting companies seeking to reduce their net emissions. Agribusiness companies call that a double win for farmers as their fields become healthier and they earn extra cash.

This week, Saskatchewan-based Nutrien said it was launching a sustainable agriculture program on 100,000 acres in the United States and Canada, with expansion planned later in South America and Australia.

Nutrien Chief Executive Chuck Magro estimated that farmers will earn an additional $50 per acre in profits under the program – $20 per acre for carbon credits and $30 per acre worth of higher crop yields.

The announcement followed Nutrien's 2018 purchase of digital farming company Agrible, which helps farmers log reduced emissions and water use. Magro said in an interview that the aim is to enable farmers to use that data to sell carbon credits. He noted that previous efforts produced meagre returns that were not worth the effort for farmers who had to wade through hundreds of pages of documents.

Agriculture accounts for 3% of the global carbon credit market, but that looks to grow to 30% by 2050, Magro said. "We see carbon being the next big agricultural revolution," he said.

Matt Coutts, chief investment officer of 100,000-acre Coutts Agro in Saskatchewan, plans to sell carbon credits through Nutrien for up to 10,000 acres per year of canola, lentils and spring wheat. He expects they could eventually generate at least C$75,000 in annual additional revenue.Ohio-based start-up Locus Agricultural Solutions helped Iowa farmer Kelly Garrett create 22,400 tonnes in carbon credits by verifying his fields locked in about 1.4 tonnes per acre from 2015 to 2019. Garrett received a check for 5,000 of those credits in November, after e-commerce platform Shopify (NYSE:SHOP) bought them on the carbon trading marketplace Nori for $75,000.

"The ability to sell our carbon credits through the Nori system and help the rest of the world be more green is a wonderful benefit to our economy and our finances," Garrett said.

Still, Nori noted that Microsoft Corp (NASDAQ:MSFT) passed on a deal to buy most of Garrett's remaining credits because they were not verified by on-farm soil tests. Nori deems individual soil tests too costly, and instead verifies its credits based on soil type, crops planted and other data, said Alexsandra Guerra, the company's director of corporate development.

Microsoft declined to comment.Few North American farmers have gone through the vetting process Garrett underwent, which also limits supplies of the high-quality carbon credits that some buyers seek.Some critics say carbon saved from no-till farming can easily escape if the soil is tilled again. "Statements that soils can sequester all of our emissions and more are overstated … There's no way we could make that shift fast enough to address the climate crisis," said Tara Ritter, senior program associate with the Institute for Agriculture and Trade Policy.

Despite those doubts, food companies are banking more on carbon capture and regenerative agriculture. General Mills (NYSE:GIS) offers farmers technical advice while other companies pay growers up front to adopt greener practices.PepsiCo (NASDAQ:PEP), maker of Quaker Oats and Frito-Lay chips, pays farmers $10 an acre to plant cover crops over winter, which can reduce erosion and control weeds and insects.

This helps PepsiCo meet its sustainability targets and secure its food supply, said director of sustainable agriculture Margaret Henry. PepsiCo subsidized cover crops such as rye and radish last year across 50,000 Midwest acres and plans to grow the program further.

Henry pointed to an added benefit: Cover crops soak up excess moisture, making many fields ready for spring planting two weeks earlier than fields that lay fallow."We want this to be a win win for the long term," she said.