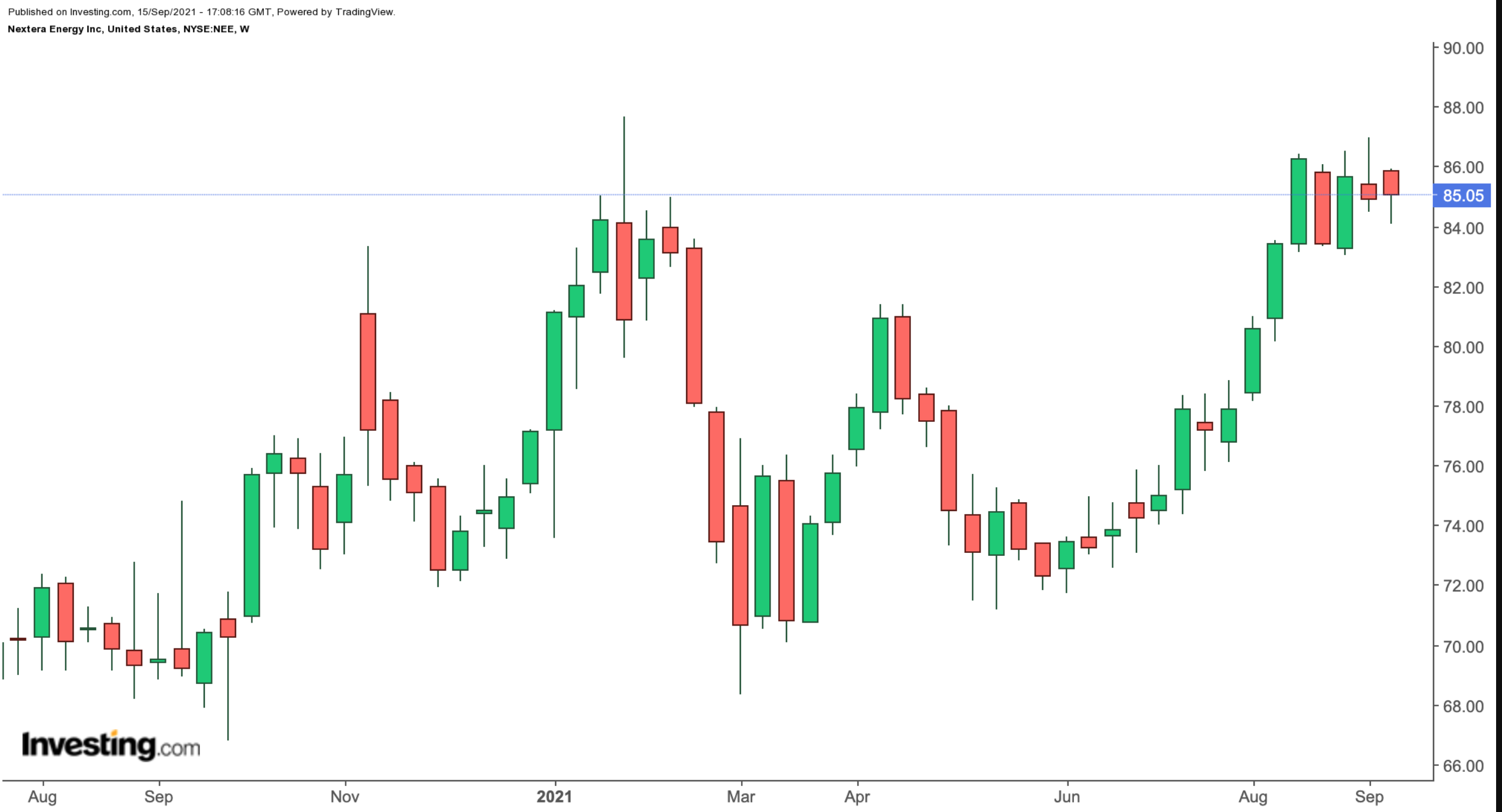 Juno Beach, Florida-headquartered Nextera Energy is one of the largest electric utilities stateside. The group is also among the leading generators of wind and solar power.

The utility issued Q2 in late July. Adjusted earnings came at 71 cents per share. A year ago, it had been 65 cents. The company reports revenue in three main segments:

“NextEra Energy delivered strong second-quarter results and remains well-positioned to meet our 2021 and longer-term growth expectations… We grew adjusted earnings per share by more than 9% year-over-year.”

Management is focused on growing the renewables portfolios and battery storage projects. As a result, it has been expanding its customer base.

What To Expect From NEE Stock

Among 22 analysts polled via Investing.com, NextEra stock has an ‘outperform’ rating. The shares have a 12-month price target of $90.56, implying a return of close to 7% from current levels. In other words, the Street’s expectation is for a modest price appreciation. The 12-month price range currently stands between $78 and $109.30.

Put another way, NEE stocks look overvalued compared to other utilities. Investors have, in part, put a premium on NextEra’s renewable energy business, especially in the past year when clean energy shares have been extremely hot.

Investors who watch technical charts might be interested to know that a number of NEE stock short-term oscillators are overbought. Although they can stay extended for weeks, if not months, potential profit-taking could also be around the corner.

If broader markets, or energy shares, were to come under pressure during the rest of the month or in October, we could potentially see Nextera stock decline toward $82, or even $80. If the stock does not find support at that level, the next leg could take NEE below $80, after which it could trade sideways while it establishes a new base.

Finally, as part of the short-term sentiment analysis, it would be important to look at the implied volatility (IV) levels for NEE stock options. This metric typically shows us the market’s opinion of potential moves in a security. However, this metric does not forecast the direction of the move.

Our expectation is for the stock price to come under pressure soon and move first toward $82, and then possibly $80. Such a potential decline would offer new NEE investors a better entry point.

As an important utility and clean energy play, any potential decline in NextEra shares are likely to be short-lived. Toward the end of the year, we could possibly see a new leg up emerge in NEE stock that would eventually lead to a new ATH.

Investors who are not concerned with daily moves in price and who believe in the long-term potential of the company could consider investing in NextEra shares now.

On Sept. 17, NEE stock is at $85.05. Buy-and-hold investors should expect to keep this long position for several months while the stock first makes another attempt at the record high of $87.69, and then toward $90.56, analysts’ consensus estimate. Such a move would lead to a return of about 7%.

Meanwhile, investors who are concerned about large declines might also consider placing a stop-loss at about 3-5% below their entry point.

2. Buy An ETF With NEE As A Main Holding

Many readers are familiar with the fact that we regularly cover exchange-traded funds (ETFs) that might be suitable for buy-and-hold investors. Thus, readers who do not want to commit capital to NEE stock but would still like to have substantial exposure to the shares could consider researching a fund that holds the company as a top holding.

Examples of such ETFs include:

Readers who believe there could be more profit-taking in NEE stock in the short run might consider initiating a bear put spread strategy. As it involves options, this set up will not be appropriate for all investors.

It might also be appropriate for long-term NEE investors to use this strategy in conjunction with their long stock option. The set-up would offer some short-term protection against a decline in price in the coming weeks.

Such a bear put spread would be established for a net debit (or net cost). It will profit if NextEra shares decline in price.

For instance, the trader might buy an out-of-the-money (OTM) put option, like the NEE Dec.17 82.5-strike put option. This option is currently offered at $2.68. Thus, it would cost the trader $268 to own this put option, which expires in about three months.

At the same time, the trader would sell another put option with a lower strike, like the NEE Dec.17 77.5-strike put option. This option is currently offered at $1.35. Thus, the trader would receive $135 to sell this put option, which also expires in slightly over three months.

This maximum loss of $133 could easily be realized if the position is held to expiry and both NEE puts expire worthless. Both puts will expire worthless if the NextEra share price at expiration is above the strike price of the long put (higher strike), which is $82.50 at this point.

This trade would break even at $81.17 on the day of the expiry (excluding brokerage commissions).

In addition to its robust electric utility business, NextEra Energy will likely benefit benefit from the increasing use of alternative energy sources. Therefore, investors with a two- to three-year horizon are likely to see significant returns in NEE stock. However, there could be further short-term profit-taking in NextEra stock in the coming weeks.