A reader recently wrote in to ask:

Brett, if you could only invest in one ticker over the next year, what would it be?

I’d buy a stock backed by three financial trends that are likely to gain more attention in the months ahead. Definitely the type of firm that is due to dominate the “narrative” in 2021.

Don’t worry, this won’t simply be a story stock. Because it’s me, we’re also requiring value and, most importantly, yield with our storytelling.

Powell has put on quite the show of late. He’s upped our M2 Money Supply by a breathtaking (and scary) 25% over the past 12 months: 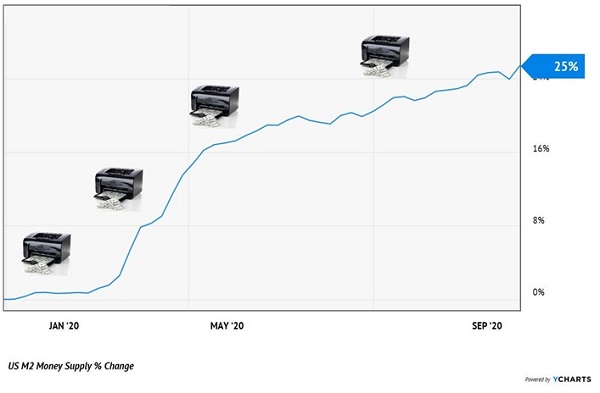 Powell has flat out said that he wants inflation at 2% per year. As he works towards his “goal,” he should have company in the form of higher bond yields. After all, who would buy a 10-year bond that pays 1% when inflation is running at 2%?

Which brings us to our second chapter: Higher rates.

It’s hard to believe that less than three years ago, the 10-year yielded not one, not two, but three percent:

The 10-Year Rate Bottoms, and Starts to Rally 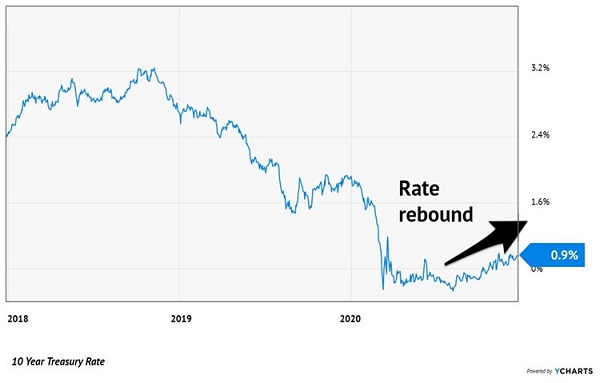 Thanks to Powell, long-term rates have reversed to the upside. They’re “careening” towards 1% as we speak.

Psychologically speaking, 1% is significant, and it will likely take some time for rates to clear this hurdle. Once they do, they could very well be off to the races.

Again, I’m talking about the long bond here. I don’t expect Powell to raise the Fed Funds rate (currently in the basement at 0.25%) until he absolutely has to. Which means firms that “borrow short”—paying the lowest rates—should be in nice shape in 2021.

With the “spread” between the long and short end of the curve ballooning to something (from nothing), bank profits will benefit. In relative terms, it will be a huge windfall because their borrowing costs will stay low while their lending profits pop.

Now, the trick to buying banks is to get them at or below book value. Book value is a popular valuation measure for banks because most of their assets and liabilities are marked to market. It’s often thought of as the bank’s liquidation value. If you can buy a bank for less than that, it’s the closest thing to a free lunch we’ll ever see on Wall Street!

I look past Wall Street’s big banks while searching for these bargains. Sure, Citigroup (NYSE:C), for example, trades for just 71% of book value today, but its balance sheet is a monolith that is difficult to trust. And how many big bank CFOs actually knew what their loan books held heading into 2008? We should be wary of these types of black holes.

The small banks that service Main Street, meanwhile, are the best pure plays on:

Plus, they actually know their customers, which lowers their loan risk. And they can trade well below book from time-to-time, if you know where to look.

Take Synovus Financial (NYSE:SNV), which traded for just 67% of book value when we added it to our Contrarian Income Report portfolio in April 2020. The stock paid a fat 6% at the time, and while our purchase required foresight and spine to execute, it’s a good thing we did. We’re well on our way to a “dividend double” with SNV:

Our 83% Returns (Including Dividends) in 9 Months 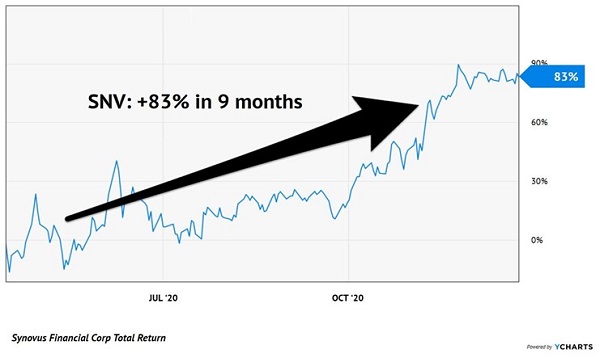 “First-level” income investors would find these gains baffling, because SNV’s paper profits appeared to crater during this run. However, free cash flow (FCF)—a more accurate measure of business health—held steadier while the stock soared 83% after purchase: 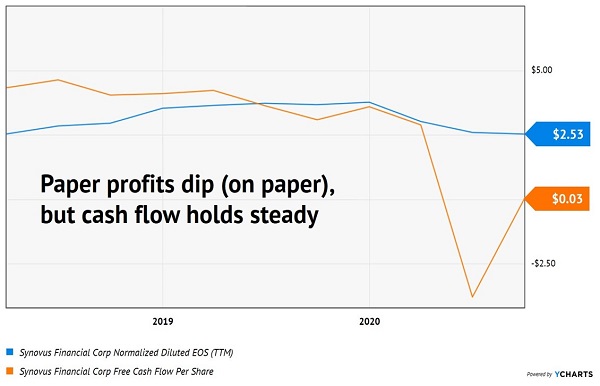 Many of these gains are thanks to a bounce in SNV’s price-to-book-value, which now sits at a more normal 106%. If you missed the rally, don’t worry, there’s another bargain to buy. We just need to do our own homework because most financial websites don’t understand what a deal this bank is.

The firm “broke” its book value when it minted money by taking advantage of a financial event—a “conversion”—for small banks. If you’re not familiar with conversions, think of initial public offerings, or IPOs, when companies put their shares up for sale to the public for the first time and get cash back in return.

Conversions are similar, and some small private banks choose to go public in two conversion steps instead of one. This means that in lieu of selling all shares to the public, they’ll sell some in a “first step” while keeping the rest in what’s called a mutual holding company (MHC). Several years later, the bank will complete the “second step” of the conversion and sell the MHC’s stake to the public.

This bank is in between these steps, and it already has more money than it knows what to do with. So, the firm is hiking its dividend as fast as it can and buying back shares to boot. Its price-to-book looks out of whack to first-level investors because the MHC still holds most of the shares.

The company sold 31.7% of its shares to the public during its first step offering in 2007. Its MHC kept the other 68.3%. Since then, it’s repurchased nearly half of the minority shares it originally issued!

The big benefit? This only pays dividends to its minority shareholders. So, anyone who buys shares today will bank a sweet 6.4% yield from a dividend that keeps on rising.