Worldwide vehicle parts manufacturer Magna International (NYSE:MGA) stock has benefitted from the electric vehicle (EV) momentum lead by first movers like Tesla (NASDAQ:TSLA) and into the legacy U.S. automakers like Ford (NYSE:F)) and General Motors (NYSE:GM). Shares are tracking the benchmark S&P 500 index. With deals to outfit EV vehicle parts and even full assembly rollout with EV player Fisker (NYSE:FSR), Magna is becoming a global aggregator for the electrification of vehicles and trucks. Prudent investors seeking a core player in the fast growing EV manufacturing segment can monitor opportunistic pullback levels to build a position in Magna International.

On Nov. 6, 2020, Magna released its fiscal third-quarter 2020 results for the quarter ending September 2020. The Company reported an earnings-per-share (EPS) profit of $1.95 excluding non-recurring items versus consensus analyst estimates for $1.37, a $0.58 blowout beat. Revenues fell (-2%) year-over-year (YoY) to $9.13 billion beating analyst estimates for $9.11 billion. The Company generated $1.6 billion in cash from operations versus $750 million in Q3 2019. Free cash flow was $1.3 billion ending the quarter with $5.3 billion in liquidity, including $1.6 billion in cash. The Company provided upside guidance for full-year 2020 revenues estimated between $31.5 billion to $32.5 billion versus consensus analyst estimates at $31.45 billion and up from previous guidance between $30 billion to $32 billion.

“While sales were down (-2%) YoY, our adjusted EPS increased 38% to $1.95 in the quarter… While production is recovering and auto sales have been fairly robust in the past few months, the resurgence of COVID-19 remains a risk to future sales and production.”

He went on to confirm that the initial production of the Fisker Ocean is scheduled for Q4 2022. Walker also introduced the new CEO, Swamy Kotagiri, taking over as of January 2021. CFO Vincent Galifi provided color on the sales decline:

“Following the worst YoY production decline in vehicle production during the second quarter of 2020, that we can recall, we experienced a significant recovery in our key markets in the third quarter. And we quickly bounced back to profitability, stronger margins and solid free cash slow generations even on relatively low production.”

On Dec. 17, 2020, Magna signed a “definitive” platform and initial manufacturing agreement with Fisker. The deal enables Magna to exclusively manufacture the Fisker Ocean SUV EV. Fisker claims to have received over 10,400 paid reservations as of the announcement date and has scheduled the unveiling of a production-intent prototype of summer 2021. Fisker was considered the original “Tesla Killer” as its iconic founder, Henrik Fisker, was credited with the design of the Tesla Model S. Frisker’s futuristic concept car designs have placed him as one of the most successful car designers in history with prior achievements including the BMW Z8 roadster, Ford Shelby GR-1, and the Aston Martin V8.

On Dec. 22, 2020, Magna and LG Electronics announced a joint venture expected to launch by July 2021, to manufacture EV parts including e-motors, inverters, and on-board chargers for various automakers. The joint venture, tentatively named LG Magna e-Powertrain, is expected to employ a workforce of over 1,000 employees through the U.S., South Korea, and China. The goal is to accommodate the global electrification of vehicles. This joint venture solidifies Magna’s footprint as the go-to player in EV parts and vehicle manufacturer. Further speculation on the prospects of a deal with Apple (NASDAQ:AAPL) for it’s rumored EV have been making the rounds. 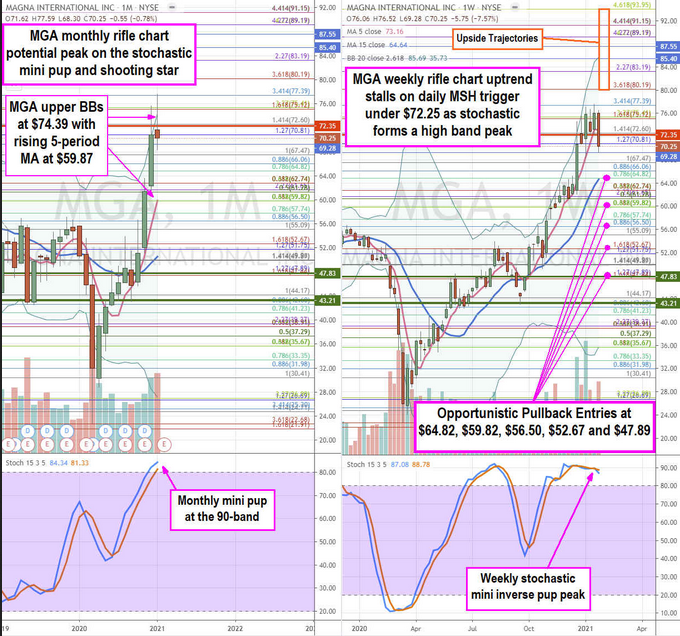 Using the rifle charts on the monthly and weekly time frames provide a broader view of the price action playing field for MGA stock. The monthly rifle chart has been in a strong mini pup uptrend that is starting to peak out with the shooting star peak. The monthly upper Bollinger Bands (BBs) sit at $74.39 with monthly 5-period moving average (MA) is rising at the $59.82 Fibonacci (fib) level. The monthly and weekly rifles charts formed market structure low (MSL) buy triggers above $43.21 and $7.83, respectively. The weekly rifle chart peaked out at the $77.39 fib resistance causing the weekly stochastic to peak triggering a mini inverse pup under the weekly 5-period MA. The daily formed a market structure high (MSL) under the $72.35 trigger. Selling pressure on the weekly mini inverse pup can form opportunistic pullback levels at the $64.82 weekly 15-period MA/fib, $59.82 fib, $56.50 fib, $52.67 fib and the $47.89 fib. The upside trajectories range from the $80.19 to the $93.95 fib with further upside potential through $100.