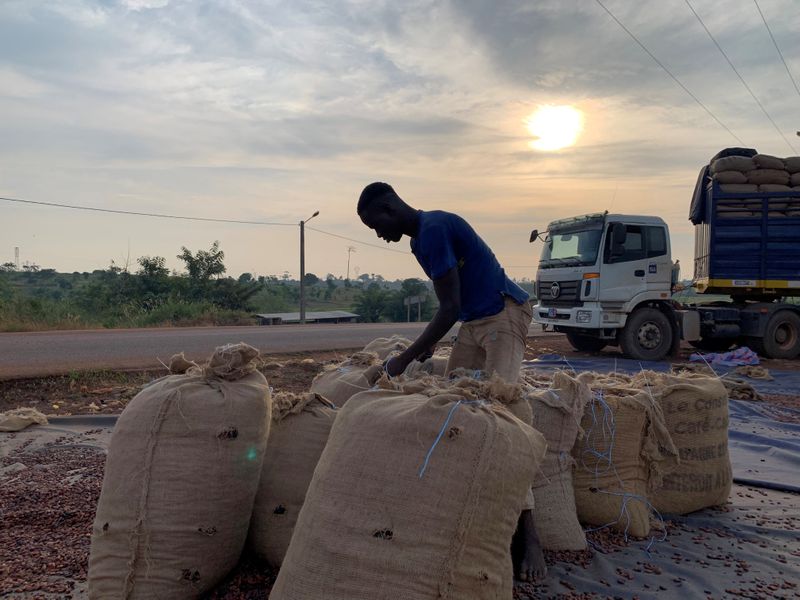 © Reuters. FILE PHOTO: A worker sews up cocoa bags to load them into a truck bound for the port of San Pedro, at a cocoa cooperative in Duekoue 2/3

ABIDJAN (Reuters) – Ivory Coast will lift a suspension on cocoa sustainability schemes run by U.S.-based Hershey on its territory that it imposed earlier this week, according to a letter addressed to the chocolate maker and seen by Reuters.

Hershey, makers of such popular candy items as Hershey chocolate bars, Hershey's Kisses and Kit Kat, said it was fully participating in the LID and would continue to do so.

Ivorian regulator, the Coffee and Cocoa council (CCC), has since held a video meeting with Hershey representatives in which it promised to lift the suspension, according to the letter dated Dec. 4, from the CCC to Hershey.

The move "follows your definitive commitment to pay the LID", the letter said.

A CCC spokesperson verified its authenticity.

Hershey did not immediately respond to a request for comment.

It was not clear if Ghana's cocoa industry regulator, Cocobod, would follow suit. It did not immediately respond to a request for comment.