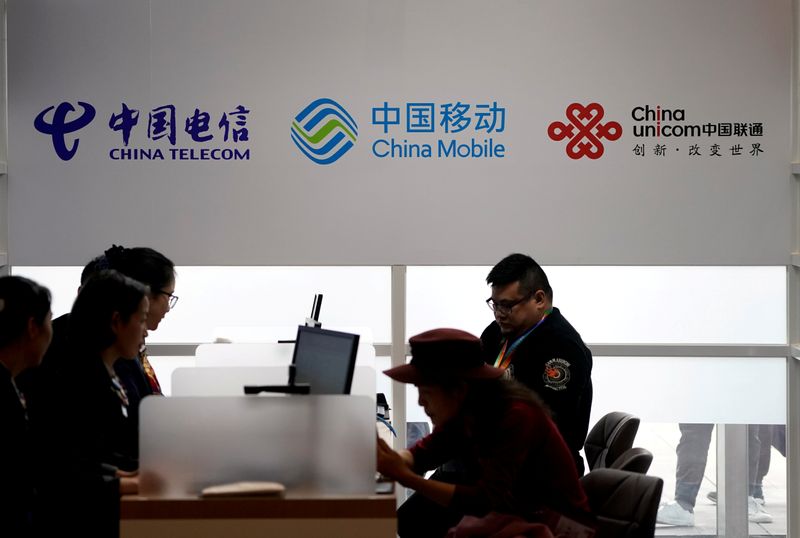 © Reuters. FILE PHOTO: Signs of China Telecom, China Mobile and China Unicom are seen during the China International Import Expo at the National Exhibition and Convention Center in Shanghai 2/2

By Tom Westbrook and Pei Li

(Reuters) -The New York Stock Exchange said it no longer intends to delist three Chinese telecom giants that have been targeted by U.S. President Donald Trump's outgoing administration, in a shock reversal of an announcement made only last week.

The exchange said in a statement it had made the decision "in light of further consultation with relevant regulatory authorities."

It had said on Thursday it would delist China Mobile (NYSE:) Ltd, China Telecom (NYSE:CHA) Corp Ltd and China Unicom (NYSE:CHU) Hong Kong Ltd following U.S. government moves to block investment in 35 firms deemed to be owned or controlled by the Chinese military.

Hong Kong-listed shares in the firms surged on the announcement, with China Unicom up 6.7%, while China Mobile and China Telecom each gained 5%.

"(It) shows how little light there is in that set of regulatory guidance so far, especially around the time the U.S. is changing administrations," said Tariq Dennison, managing director at GFM Asset Management in Hong Kong.

Dennison's funds hold China Mobile shares in both Hong Kong and New York, but he has largely unwound New York positions recently, partly to find U.S. clients investments that are less exposed to Sino-U.S. tensions which will probably persist.

"I don't think Biden will magically de-escalate anything," Dennison said.

"He is inheriting a position of tension in U.S.-China relations where he will probably not want his first 100 days to be remembered for instant concessions."

China Unicom and China Telecom said in statements that they had taken note of the development and would release information in accordance with regulations, adding that investors should pay attention to investment risks.

A representative for China Mobile was not immediately available for comment.

A representative for the NYSE declined to comment beyond the bourse's statement.

China's foreign ministry had called the planned delisting of the three companies "unwise" and denounced what it said were "random, arbitrary and uncertain" rules.

The NYSE's latest announcement briefly boosted an already rising Chinese yuan to a new 30-month high on hopes it might herald some kind of easing in geopolitical tension.