Let’s talk about inflation for a moment, because worries over rising prices are boiling over, and we contrarians can work them to our advantage.

If you’ve been watching the markets—and I’m guessing you have—you know that the rising 10-year Treasury yield, and the specter of inflation it brings, has weighed on stocks—particularly tech stocks. 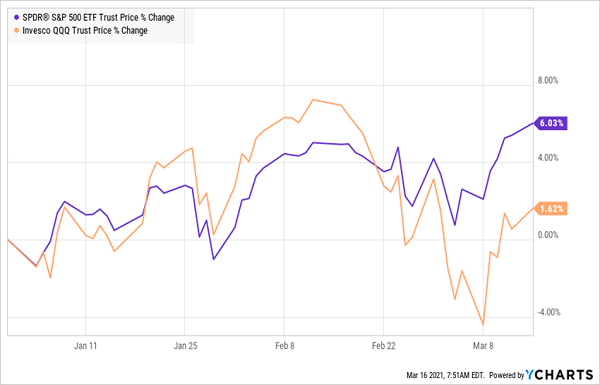 As you can see, the tech-heavy NASDAQ (via QQQ), which outperforms the S&P 500 (via SPY) over just about any timeline, has fallen well behind in 2021 as of this writing. Meantime, Treasury rates continue their climb. 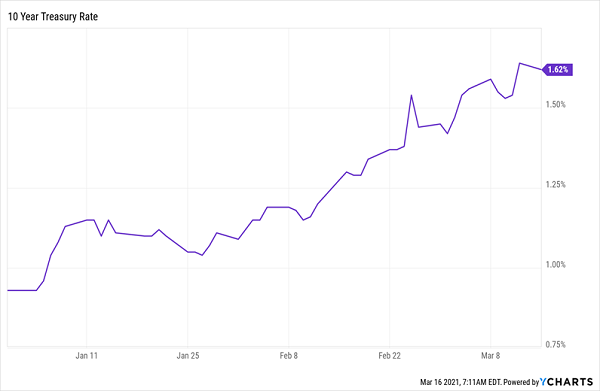 Here’s where the story gets interesting, because normally inflation fears trigger a rush into gold—but that’s just not happening this time. 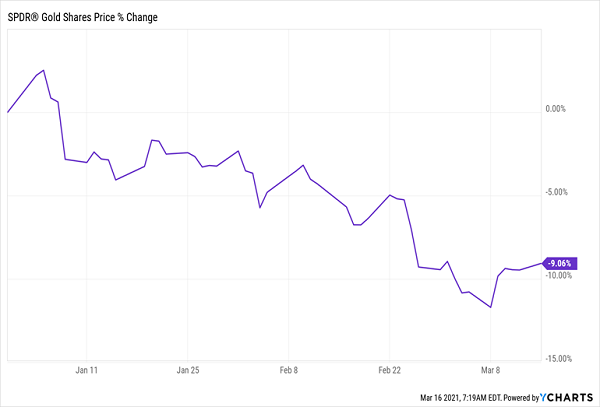 So if inflation fears aren’t driving money into a well-established inflation hedge like gold, what’s really happening here? The answer sounds surprising at first, until you drill down into the data: it’s simply that the inflation fear is a mirage.

The Difference Between Worrying About Inflation and Actual Inflation

Economists agree that the recently passed $1.9-trillion stimulus bill and the growing vaccination rate mean we’re quickly moving toward having an economy full of consumers with money to spend and opportunities to spend it. More spending means more , so inflation will definitely rise.

But how much will it rise?

To answer that, we need to look at a metric tracked by the Federal Reserve showing expectations of inflation based on what traders are doing. This isn’t an academic exercise; it’s what trillions of dollars betting on the future value of the greenback are saying inflation will be in the coming years. That metric is rising, as it has been since the pandemic began.

But if you look at the white space at the start of this chart, you’ll see that the market’s current inflation expectations (2.01%) are just a hair above pre-pandemic expectations of 1.88%. Further, 2.01% is where the Federal Reserve wants inflation to be. So if anything, we’re now hitting the target of where inflation should be.

But that’s now. Shouldn’t we worry that this line is going up, meaning we’ll exceed 2% and get into dangerous territory soon? Not exactly.

When we compare the actual rate of inflation, as defined by changes in the consumer price index, we see that the inflation rate has been consistent, and low, over the last decade.

What to Do Now

With inflation capturing the financial press’s attention for a few weeks, contrarians had a nice opportunity to buy in by picking up the NASDAQ 100 through an index fund, for example. 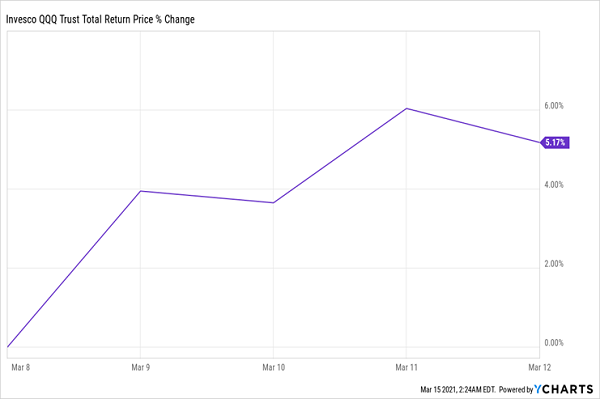 Some tech funds have done much better. 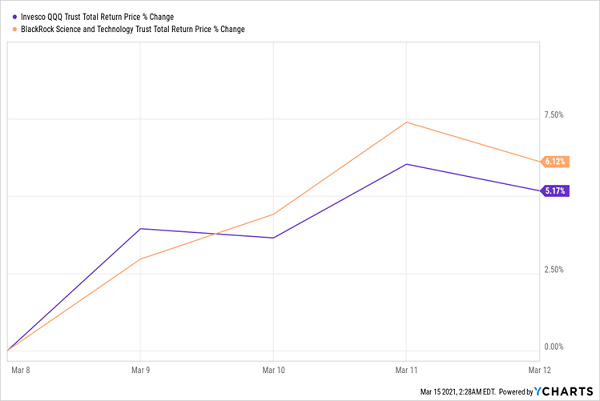 The BlackRock Science and Technology Trust (NYSE:BST), for instance, is up 6.1% over that same time period while also paying a 5% dividend, which is nearly 10 times the payout on the tech benchmark Invesco QQQ Trust (QQQ).

BST, which holds large cap tech names like Apple (NASDAQ:AAPL) and Microsoft (MSFT) also recently raised its dividend, one of about a dozen closed-end funds (CEFs) to do so—and that’s a sure sign of the fund’s ongoing strength as the economy picks up.