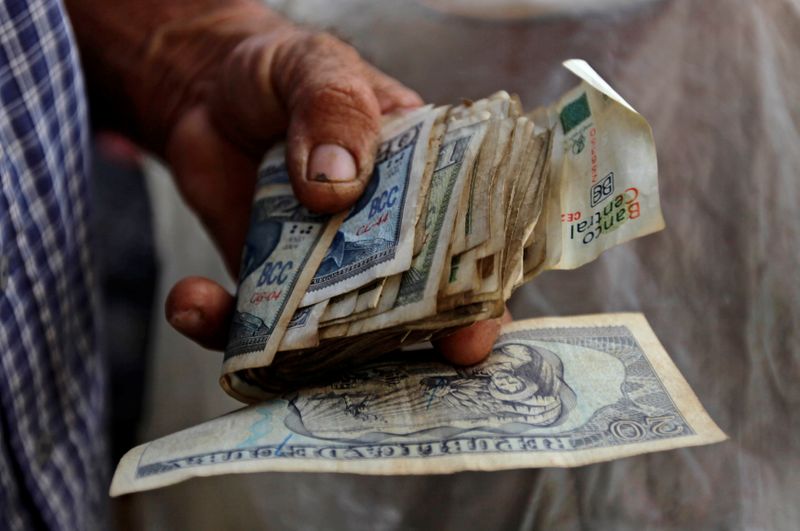 © Reuters. FILE PHOTO: A farmer holds a wad of Cuban money at a vegetable stall at a market in central Cuba

HAVANA (Reuters) – The Cuban government announced on Thursday it would start a long-awaited monetary reform in January, unifying its dual currency and multiple exchange rate system in a bid to bring more dynamism to its centrally planned economy.

The reforms were first adopted by the Communist Party a decade ago as it moved toward a more market driven system and closer links with the international economy but foundered thanks to bureaucracy and internal divisions.

HOW DOES CUBA’S MONETARY SYSTEM WORK?

For nearly three decades, two currencies have circulated in Cuba: the peso and the convertible peso (CUC), both officially valued at one-to-one with the dollar. Neither are tradable outside the country.

The currencies are exchanged at various rates: one-to-one for state-owned businesses, 24 pesos for 1 CUC for the public and others for joint ventures, wages in the island’s special development zone and transactions between farmers and hotels.

Cuba created the system as part of a package of measures to open up its economy after the collapse of the Soviet Union.

While the system helped Cuba get through the shock of the Soviet collapse, it ended up also hiding the real economic situation.

The CUC will be eliminated. President Miguel Diaz-Canel said it would leave the peso at a single fixed rate of 24 to the dollar, scrapping other more favorable rates in the first official devaluation of the peso since Cuba's 1959 revolution.

The government has also begun opening stores that sell consumer goods for dollars and other traded currencies, though only with a bank card.

Havana says this is a temporary measure but the partial dollarization will also provide some stability, especially for families who receive remittances.

Meanwhile, state and private companies can now keep tradable currency accounts with up to 80% of their export earnings instead of handing them over to the state.

Devaluation is inflationary, while ending subsidies leads to layoffs, yet the Cuban government says it expects to avoid any "shock therapy" in the economy where the state sets most prices and wages.

Economists expect triple digit inflation, and the government has said the initial devaluation will be accompanied by a five-fold increase in average state wages and pensions even as many state-controlled prices also may rise.

But the wage increase does not apply to around 2 million of the 7 million plus labor force in the private sector, informal sector or who simply do not work.

Meanwhile the government says state-run companies, as a rule, will no longer be subsidized.

Cuban economists estimate around 40% of state companies operate at a loss and though some will benefit with the reform, others will go under.

Still, the government says some companies will be given a year to get their books in order before ending subsidies.

The government says residents will be given 180 days to exchange convertible pesos once they are taken out of circulation.

Cuba is seeking to reverse its worst crisis since the fall of the Soviet Union, with growth seen plummeting more than 8% this year by boosting business conditions and productivity.

The country is dependent on imports for more than 50% of food and fuel, plus inputs for agriculture and pharmaceuticals. Yet a combination of U.S. sanctions, local economic blunders and the COVID-19 pandemic have gutted Cuba’s ability to earn tradable currency.

Cuba has been rapidly piling up debt in recent years, while still being plagued by a scarcity of basic goods, from food and personal hygiene products to medicine and fuel.