Investing in semiconductor stocks has proved to be a winning bet for investors over the past two years. When the usage of  everything—from laptops, to cellphone and data centres—exploded during the pandemic, the companies that make the world’s fastest and smallest chips struggled to meet demand.

Since the market crash of March 2020, the benchmark has surged more than 180%. Some of the largest chip-makers, like NVIDIA (NASDAQ:) and Advanced Micro Devices (NASDAQ:) also produced impressive returns that swelled their market capitalizations.

There is no sign that this party is coming to an end any time soon. Taiwan Semiconductor Manufacturing (NYSE:), the world’s most advanced manufacturer of semiconductors, expects sales to rise more than 20% in 2021. The company, which also supplies chips to Apple (NASDAQ:) and a key partner to many of the world’s biggest car-makers, expects semiconductor supply to remain tight into 2022.

But if history provides any clues, the chip industry is highly cyclical and demand-supply patterns turn quickly. The unprecedented surge in investment to boost supplies is also fuelling fears the industry will overshoot, adding so much capacity in the years ahead that it could hit the high-flying stocks badly. If you want to play safe in this sector by buying less volatile stocks, we recommend you consider Broadcom (NASDAQ:) stock. The San Jose-based Broadcom’s wireless connectivity chips are used in iPhones and other smartphones.

Its switch silicon and custom designs are essential parts of data centers owned by cloud-computing giants like Alphabet’s Google (NASDAQ:)  and Amazon AWS (NASDAQ:). Broadcom is also a major provider of silicon used in set-top boxes and home-networking gear.

In an earnings report released last week, Broadcom again surpassed analysts’ expectations. In the fiscal , which ended Aug. 1, Broadcom’s profit rose to $6.96 a share, excluding some items. Revenue jumped 16% to $6.78 billion. Analysts had predicted a profit of $6.85 a share on sales of $6.76 billion.

Revenue in the fourth quarter will be about $7.35 billion. That compares with an average analyst estimate of $7.23 billion. One distinctive feature of Broadcom’s growth strategy is that the company is preparing itself for an eventual demand slowdown by not excessively supplying to customers.

Chief Executive Officer Hock Tan told investors last Thursday that even with demand for its chips surging, the company is tightly controlling which orders it fills to avoid creating a glut in the future.

“We can show bigger numbers, but that means we will build inventory in the wrong places,” Tan said. The company is applying “discipline to supply” and focusing on where it’s really needed, he said.

The extensive reach to multiple industries that Broadcom enjoys also gives investors both a reliable income stream and added upside potential. While Broadcom stock soared more than 120% in the past three years, its dividend also swelled. It has more than tripled, from $1.02 per share each quarter in 2017 to $3.60. 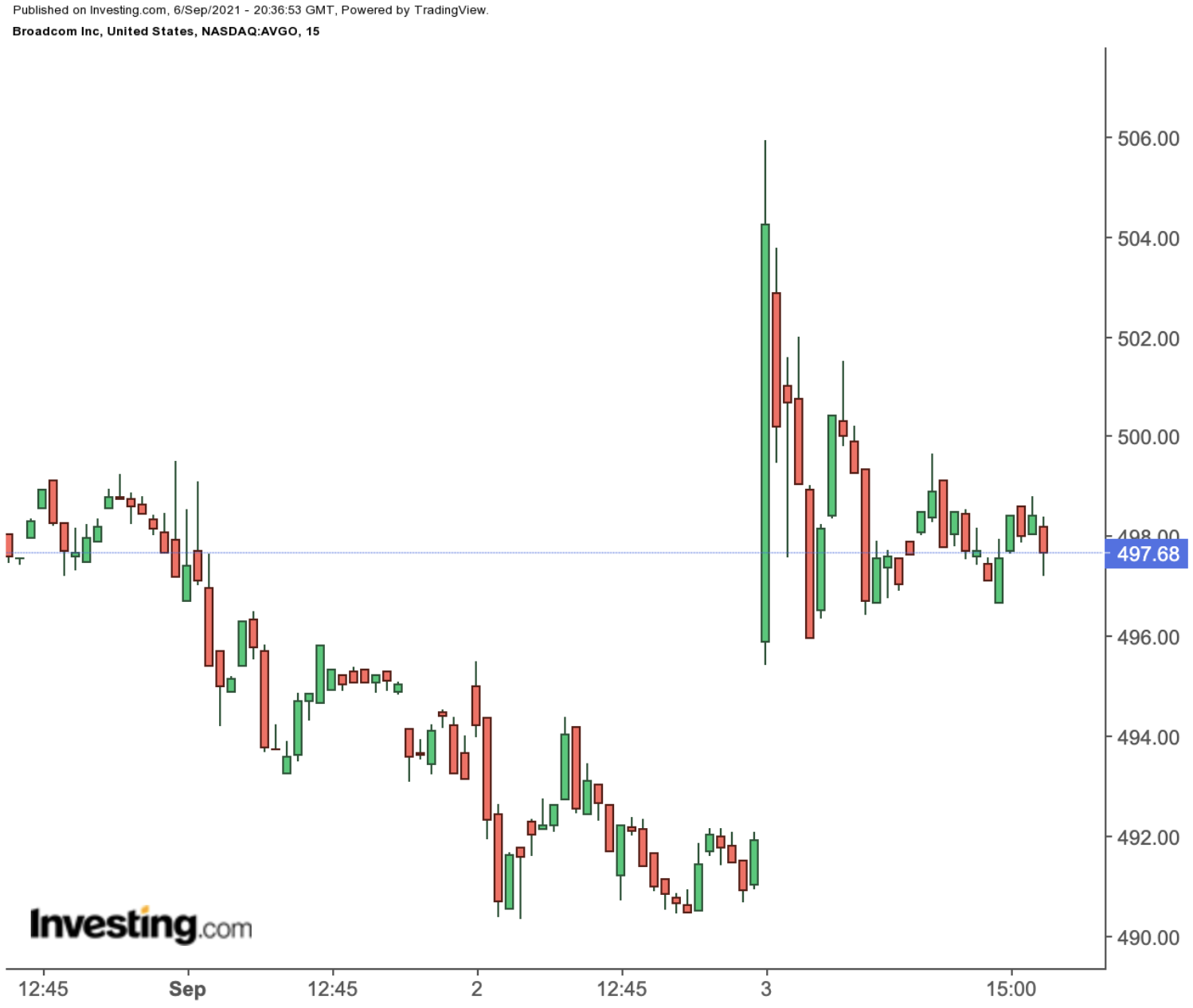 The stock is currently yielding about 3%—a rate of return that is higher than the average yield offered by companies.

Broadcom is in a strong position to reward its investors with hefty payouts going forward as demand for its chips remains strong. About 90% of Broadcom’s 2021 supply has already been ordered by customers. Normally, chip-makers have about a quarter of their supply locked up like this.

Broadcom is a growth stock that also pays a consistent dividend. The company’s careful approach to deal with the future demand shocks, combined with its dividend income, makes its stock a good pick for the risk-averse investors.