The latest pullback, which sent shares 30% lower over the past two months, started after the California-based company missed analysts’ sales forecasts in January as the COVID-19 pandemic continues to hurt its sales to restaurants. 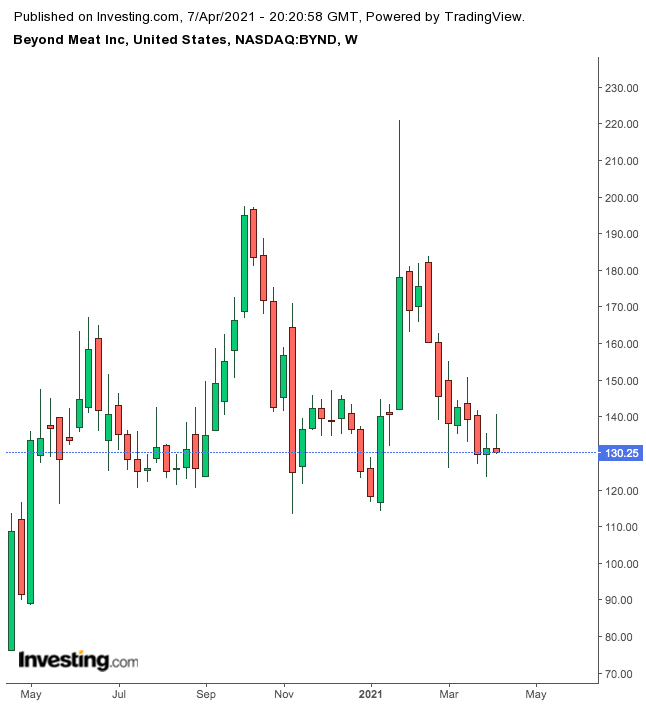 Despite the pandemic setback, we continue to believe Beyond Meat is a great food stock to own. Its recent weakness is a bump in the company’s long-term growth potential. BYND’s latest partnerships and expansion plans validate this bullish case.

Beyond Meat that it will open a manufacturing facility in China, its first outside the U.S., to produce and distribute its plant-based products, including Beyond Pork, created specifically for the Chinese market.

“The opening of our dedicated plant-based meat facility in China marks a significant milestone in Beyond Meat’s ability to effectively compete in one of the world’s largest meat markets,” said Ethan Brown, CEO and founder of Beyond Meat.

In January, Beyond Meat finalized its agreements with McDonald’s (NYSE:) and Yum! Brands (NYSE:)—two of the largest fast-food companies in the world. The three-year deal with McDonald’s makes Beyond Meat the chain’s “preferred supplier” for the McPlant patty. Beyond Meat and McDonald’s will also explore developing other plant-based menu items, including alternative chicken, pork and eggs.

In addition to these partnerships, last month, BYND began selling meatless hot Italian sausage at 400 Walmart (NYSE:) locations across the U.S. The company, which already sells some of its products at 2,400 of the retailer’s locations, will also expand distribution of its cookout-themed value pack to 500 of Walmart stores.

Analysts at Stephens believe BYND is a good buy after its recent weakness, due to strong demand for its products from quick-service restaurants, which have been adding Beyond Meat products, as well as competitors’ products, to their menus.

In a recent note, Citi analyst Wendy Nicholson said the issues that hit the group’s , including higher costs and weak food services revenues, were “mostly temporary,” adding that topline sales growth is likely to get back on track once the COVID pandemic recedes later in the year. Nicholson upgraded her rating on the stock to “buy” and boosted her price target to $184 per share.

“We believe Beyond Meat will continue to grow quickly over the next few years, but we also expect that the path of that growth trajectory may not be linear,” Nicholson said.

“However, we do believe the company’s new partnerships with McDonald’s and YUM signal a longer-term commitment by these players to the plant-based movement and Beyond Meat as a brand.”

Beyond Meat continues to remain a target of short-sellers, especially after the disruption the pandemic has caused in the restaurant business and in consumer buying patterns. But after this weakness in the share price, it has become more acceptable for long-term investors who might be keen to add a quality growth stock to their portfolio.