GameStop Corp (NYSE:), the video game retailer favored by the Reddit crowd, is showing investors that its business has momentum while it implements its turnaround plan.

In its report released on Wednesday, the brick-and-mortar electronics vendor reported better-than-expected results and posted its first quarterly sales growth in three years. For the quarter ending May 1, it had revenue of $1.28 billion, up 25% from the prior year. While the company declined to give future guidance, GameStop said sales in May rose about 27% from a year earlier.

The company has also been able to boost its cash reserves and reduce its debt, due to selling nearly $552 million of its shares during the quarter. It intends to file papers to sell up to 5 million shares, after selling 3.5 million shares in April.

As the company’s gaming console sales rebound, the Texas-based company is also moving swiftly on its plan to turn itself from being a retailer into an e-commerce powerhouse. Ryan Cohen, an activist investor who became GameStop chairman after building a 13% stake, told investors on Wednesday that he won’t disappoint them.

“We are trying to do something that nobody in the retail space has ever done,” said Cohen, who is also a co-founder of Chewy (NYSE:), at the company’s annual meeting. “But we believe we’re putting the right pieces in place and we have clear goals: delighting customers and driving shareholder value for the long term.”

Though investors know little about his actual strategy to turnaround GameStop business, his recent hirings show he is moving away from the bricks-and-mortar model.

These steps are certainly impressive but they still don’t justify a 1,500% rally in GameStop shares this year. GameStop has been one of this year’s top meme stocks, riding on a social-media buzz rather than business fundamentals. The stock closed Thursday at $220.39, down 27.6% on the day. 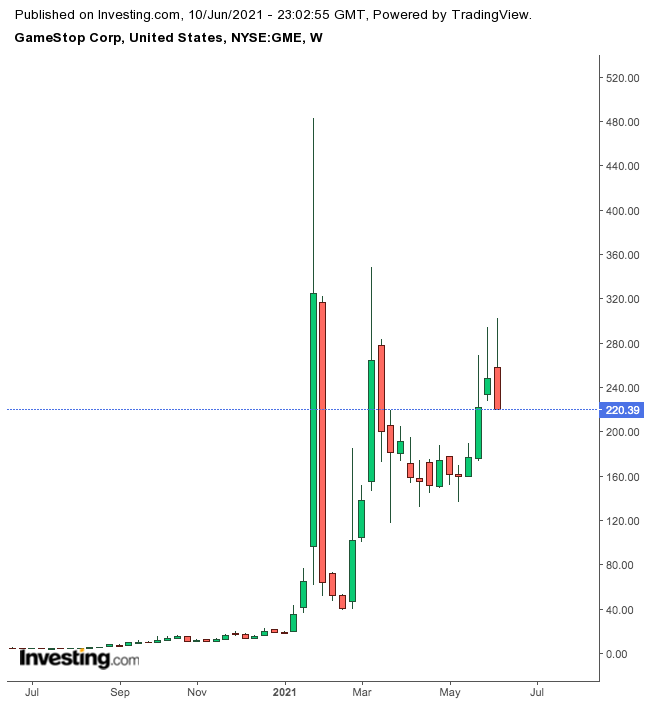 “As GameStop’s board continues to shuffle the management deck, the goal to transform into a ‘technology’ company that delights gamers remains mostly a mystery, particularly as the video game industry accelerates the shift toward downloads, streaming and cloud services,” the note said.

Baird, who has a price target of $25 per share for GameStop, further added:

“No doubt the console transition period is providing a lifeline, but games are not dog food, and investors deserve more than memes to value a company’s fundamental, long-term prospects.”

Another piece of evidence that shows that institutional investors find GameStop shares too detached from its fundamentals came from a Bloomberg report that said fewer Wall Street analysts are now covering the stock than last year.

The video-game retailer is currently covered by four analysts, down from nine analysts at the beginning of the year. As of Wednesday, GameStop has two hold and two sell ratings, according to data compiled by Bloomberg.

GameStop business and its turnaround are showing some progress after a buying frenzy by the social media-inspired investors. But that progress isn’t enough to attract serious money managers who still don’t see its shares’ meteoric rise this year supported by fundamentals.