News and Sports media company Fox Corporation (NASDAQ:) stock has sold off in sympathy with the fallout in ViacomCBS (NYSE: NASDAQ:) shares. While Fox shares may have also risen in sympathy with ViacomCBS, the sell-off may have been unwarranted unless the industry is repricing itself.

In addition to its brands—FOX News, FOX Sports, FOX Entertainment, and FOX Television Stations—the Company also has stakes in sportsbetting and through its 2.5% stake in Fan Duel’s parent company Flutter Entertainment (OTC:) while building its Fox Bet free-to-play membership of over 4 million players.

He went on to note they expect the overall news audience will normalize but share ratings will remain dominant. FOX Sports and live events and Tubi post-election will drive growth as demonstrated by FOX when it clocked 170 billion minutes of live sports viewing in Q4, over 50% more than “the next competing network.” The NFC Championships had 45 million viewers.

The return of live sports helped to bolster FOX Bet with nearly 3 million new players during the NFL season, “FOX Bet Super 6 now has a user base in excess of 4.3 million players and continues to be the biggest free-to-play game of its kind in the country.” The Company continues to leverage FOX Bet and Super 6 non-sports contests which include Stock Market Challenge, weekly Quiz Show and more to bolster viewer engagement. The combined viewership of all the FOX brands have resulted in 330 million average monthly users, up 30% YoY.

The Tubi streaming platform is expected to double revenues to $300 million in the current fiscal year and become a $1 billion business in the coming years. CEO Murdoch also unscored:

“Tubi is an exciting growth engine for the company and a key strategic platform for not only our digital expansion, but also our broader reimagining of Fox’s broadcast model for the future… Tubi is an investment in what we internally call the broadening of broadcast, meaning the FOX Network and Tubi combining seamlessly to create a modern network-inspired business.”

The addition of The Masked Singer added reach for advertisers and delivered significant view time on the platform. The advanced advertising tool helped an insurance company advertise to 100,000 more households within the same ad buy, by reducing over frequency. This resulted in multimillion-dollar ad payments to Tubi in 2021 and also a new FOX advertiser.

Tubi is a magnifier of growth that enables the FOX brand to bolster the true network effect. With a modest P/E of 14.6 and a recent sell-off due to the ViacomCBS contagion, prudent investors can watch for opportunistic pullback levels on this long-term value play to gain exposure. 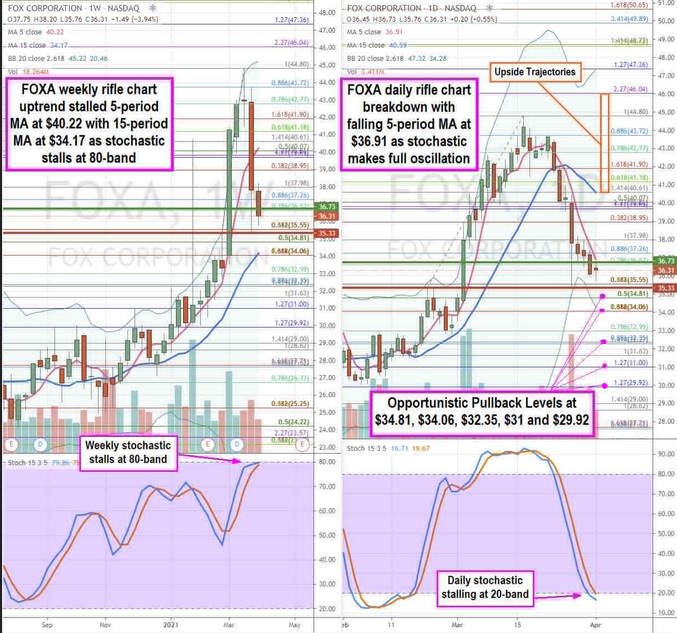 Using the rifle charts on weekly and daily time frames provides a near-term view of the landscape for FOXA stock. The weekly rifle chart uptrend peaked at the $44.80 Fibonacci (fib) level.

The weekly 5-period moving average (MA) stalled at $40.22 with a rising 15-period MA at the $34.06 fib. The weekly stochastic stalled at the 80-band as shares collapsed in sympathy with fallout in media stocks triggered by the VIAC implosion.