It’s been a dull week so far, but things pick up starting today in case you’re falling asleep. The main event comes this afternoon with minutes from the last Federal Open Market Committee (FOMC) meeting last month. The minutes are being looked at as something that could give the market a catalyst one way or another.

What people really want to see in the minutes is whether there’s any hint of what’s to come over the next six months. You can pretty much bet every word will be parsed closely by market participants. The minutes could provide a good behind-the-scenes look at any debate that went on before Chairman Jerome Powell held his press conference and doubled down on the commitment to stay accommodative even when inflation starts showing up.

Powell comes back into view at noon ET Thursday when he appears at the International Monetary Fund Debate on the Global Economy, participating in a discussion there. It seems unlikely he’d say anything market-moving, but it helps to stay on your toes whenever he speaks.

Another person in the markets people tend to listen to is JP Morgan Chase CEO Jamie Dimon. That’s why his upbeat comments reported this morning about the U.S. economic comeback might help underpin stock prices a bit today. He said in his annual shareholder letter that the U.S. economy “will likely boom” coming out of the pandemic, and that the boom could last into 2023.

For now, we continue to see light volumes, which may reflect spring break and nice weather across parts of the country. Volatility remains low. The and the . Both snapped three-day win streaks yesterday in a disappointing close.

Some of the late weakness might have reflected financials getting hit by falling Treasury yields. The dropped to 1.66% this morning, and is down more than 10 basis points from the 13-month high it logged in March. The bond rally could reflect some people taking off positions ahead of the Fed minutes.

Another thing to watch is tomorrow morning’s initial jobless claims, a weekly report that went the wrong way last Thursday, popping up to 719,000. Wall Street consensus for tomorrow’s headline number is 678,000, according to research firm Briefing.com. Remember that last week’s monthly jobs report surprised to the upside in terms of positions added, giving markets a lift. So any data point that goes in the wrong direction could certainly raise questions about the speed and sustainability of the recovery.

Consensus for Friday’s March producer price index—a read on inflation—looks a bit elevated at 0.5%, Briefing.com said. If that’s where the number comes in, it would be the second month in a row at that level, and the question with PPI is always if—and how quickly—it might be reflected in consumer prices.

The Fed has been pretty upfront getting people prepared for some inflation, saying any spike in prices will be transitory (that’s “temporary” in Fed-speak) over the next few weeks or months. Some of this could be related to supply chains coming back to full levels. Maybe you saw the recent Wall Street Journal article about the Port of Los Angeles having 24 container ships waiting to dock there. Then you have the jump in gas prices caused partly by refinery problems after the February storms in Texas.

One thing to watch for with the inflation data is comparisons to a year ago, when the pandemic first took a big bite out of the economy. We might actually see the Fed’s 2% year-over-year inflation target get hit over the coming months, but it’s unclear if the Fed would consider that a “true” 2% when you consider we’re comparing to an unprecedented time when actually went below zero one day last April. We’d probably have to see 2% or higher inflation growth for more than a few months to get the Fed feeling like it’s actually a fact on the ground, if you will.

For now, investors appear a bit more calm about inflation prospects than they did a few weeks ago, helped, in part, perhaps, by the Fed’s reassurances. Stocks fell Tuesday, but it felt more like people taking a breather from the rally. Selling pressure didn’t appear too heavy, it just seemed like there’s lack of conviction among many investors to chase the rally much higher before they get fresh catalysts.

Beyond Roads And Bridges On Infrastructure

Everyone’s been talking about which sectors potentially benefit if the Biden infrastructure plan becomes reality. Most of the focus is on traditional construction-oriented companies like Vulcan Materials (NYSE:), Construction Partners (NASDAQ:) and Caterpillar (NYSE:). What sometimes gets overlooked is the fact that the plan might also benefit other sectors ranging from semiconductors to renewable energy suppliers.

Companies involved in wind turbines, solar energy, chip-making, electric vehicle batteries, and even water (yes, there are companies that profit off of that rather common resource), could all benefit, Barron’s pointed out recently. The question is how much traction all the bill’s different initiatives can get in Congress, and whether any of those industries ultimately benefit. The bill obviously goes way beyond traditional “roads and bridges” infrastructure, and there’s a debate about whether improved broadband, for instance, now counts as infrastructure.

Good people can disagree, and there’s a lot of water under the bridge (pun intended) before any votes get taken. Just some things to keep in mind as the year unrolls.

The Importance of Differentiation—Even In A Sector

Speaking of sectors, there were a few months there where if you bought a technology stock you were pretty sure it was going higher—and in most cases it did. Now, you have to be a bit more selective, not only about which sector but even within technology.

For instance, if you’d bought a basket of the biggest cloud-computing stocks back in mid-February, you’d likely still be under water. That sub-sector of tech fell into correction territory by late February and still hasn’t fully recovered.

On the other hand, if you’d bought a basket of the biggest semiconductor stocks at around the same time, you’d have about a 6% gain to enjoy. Why did the market favor chip-makers over cloud computing these last eight weeks or so? Sometimes it’s hard to put a finger on anything exact, but economic reopening might have given chip-makers a leg up over the cloud industry. Chips tend to be seen as a more cyclical part of tech that does better during economic recovery, while cloud was a market darling during the shutdowns because companies were so dependent on it to support remote work.

The lesson here, if there is one, is that every sector has its nooks and crannies, not all marching to the same beat. Even in materials, gold and can move in separate directions, affecting the fortunes of companies there. If you’re thinking of trading a sector, do your research so you know which part of it you’re most exposed to.

Investors are at a bit of a crossroads a week out from earnings season. Many appear to be reassessing valuations after this sharp rally and maybe deciding on next steps. Life moves pretty fast, as the old movie said, and maybe people are stopping to look around before they miss it. 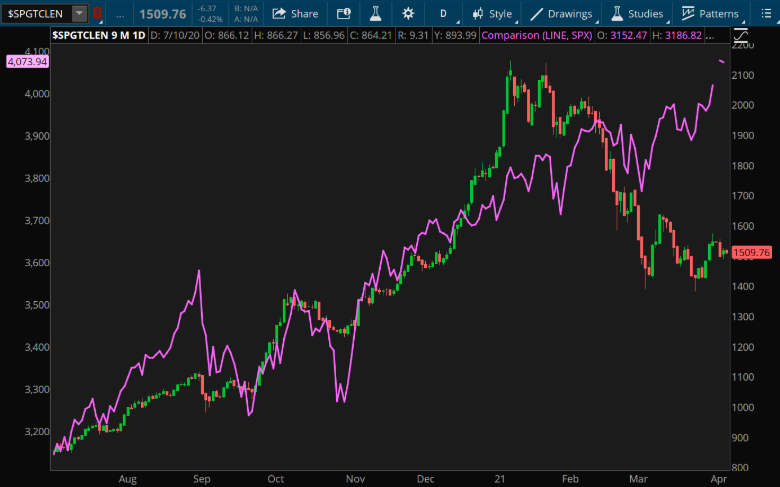 Global Clean Energy Index and S&P 500 Index Chart.
CHART OF THE DAY: IS THE BLOOM COMING OFF THE CLEAN ENERGY ROSE? Clean energy stocks soared last year, as you can see in this chart of the S&P Global Clean Energy Index ($SPGTCLEN—candlestick) vs the S&P 500 Index (SPX—purple line). They hit new highs after the election, but have been drifting down ever since. So maybe the clean energy market isn’t as slam-dunk exuberant about clean energy as it was when Biden won? Data Source: S&P Dow Jones Indices. Chart source: The thinkorswim® platform. For illustrative purposes only. Past performance does not guarantee future results.

The Perils Of Plenty: When people feel flush and frantically search to invest in assets that don’t already feel overbought, sometimes you get situations like last week where a large hedge fund apparently found itself over-leveraged (and over-exposed) to a few stocks that took a dive. The result, as we know, was ugly. That’s something investors need to watch out for at times like these in their own trading. It’s tempting to jump at what look like flashy new opportunities, sometimes in untraditional areas. That’s not necessarily a bad thing, but like anything else related to investing, it requires research.

When it feels like just about anything is working, that’s when to consider whether you’ve let your emotions overcome your critical thinking. It’s always a mistake to let emotions be your investment guide. Know what you’re getting into and have a plan for getting out. If an investment seems impossible to understand, consider finding something else. Or wait on the sideline until you can figure it out. It’s understandable that many investors want to differentiate their returns as some of the sectors that brought us here lose luster, but remember it’s harder to do that in a bull market when few stocks or other assets that deserved to rise haven’t already.

Race to 4000: The SPX reached 4000 last week for the first time less than two years after first reaching 3000 back in July 2019. It took out 2000 initially in August 2014, so the milestones are coming more quickly, but remember going from 3000 to 4000 is less of a gain than going from 2000 to 3000. If you were wondering, it took more than 16 years to get from 1000 to 2000. So the doubling time is now about half what it was, if that makes any sense. As we noted yesterday when we discussed the swift change in economic cycles, everything tends to move faster now thanks partly to technology and communications improvements, but also due to the rapid response from fiscal and monetary authorities to every crisis.

It probably goes without saying that without the support of global central banks and governments, the market would likely not have recovered so quickly from last year’s COVID selloff. In fact, this quick recovery in and of itself might be inspiring more investor confidence out of the belief that governments can jump in and blunt the impact of future crises. That confidence may be misplaced if we have another major black swan event anytime soon, considering how far central banks have already stretched themselves to fight the COVID impact. There may not be a lot more in the tank.

Millennials Have Their Say: The oldest people in the millennial generation are already turning 40, so it’s not like the word “millennial” is necessarily associated with the youngest investors any more. Still, they’re a major force in the markets and it’s worth checking how they invest. Generally, millennial investors have been more aggressive buyers of stocks so far this year than their older counterparts, though the gap narrowed in March, according to the Investor Movement Index® (IMXSM) from TD Ameritrade (NASDAQ:). Last month, millennials matched up pretty well with other investor groups monitored by the IMX on the buy-side of the equation, but on the sell-side, it was interesting to see more millennials tapering their exposure to some of the big pharma stocks like Pfizer (NYSE:) and AstraZeneca (NASDAQ:).

The IMX is TD Ameritrade’s proprietary, behavior-based index, aggregating Main Street investor positions and activity to measure what investors actually were doing and how they were positioned in the markets.