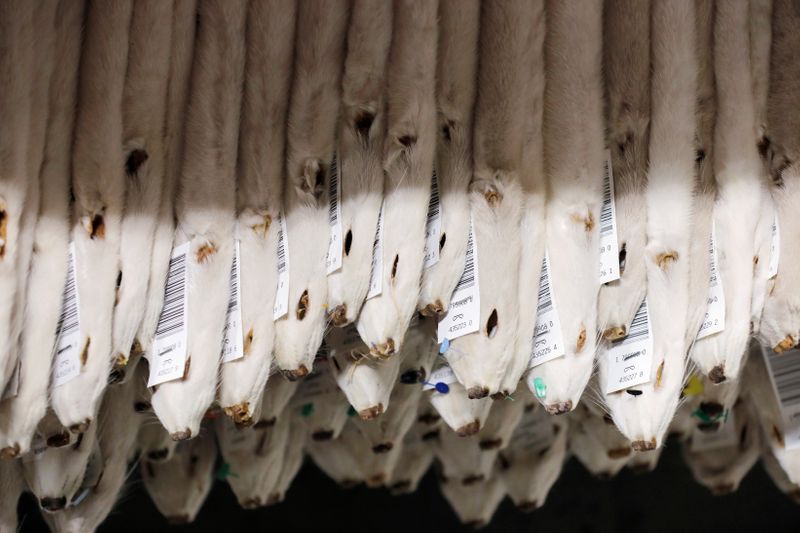 © Reuters. Labeled mink pelts are seen in storage at Kopenhagen Fur in Glostrup 2/5

By Silvia Aloisi and Nikolaj Skydsgaard

MILAN/COPENHAGEN (Reuters) – Denmark's coronavirus-driven mink cull has put the fur business in a spin, with industry officials expecting fashion houses such as Louis Vuitton, Dior and Fendi to snap up fox and chinchilla to fill the gap.

The global fur trade, worth more than $22 billion a year, is reeling from Denmark's decision to kill 17 million farmed mink after COVID-19 outbreaks at hundreds of farms led to the discovery of a new strain of coronavirus in the mammals.

Worries of a sudden shortage of slinky mink pelts, of which Denmark was the top exporter, have lifted prices by as much as 30% in Asia, the International Fur Federation (IFF) says.

Now, all eyes are on Finland, where one million mink and 250,000 fox pelts will soon be up for grabs for buyers in Korea, China, the United States and elsewhere next week. Auction house Saga Furs plans to hold the international sale, the first since the Danish cull, via livestream from Dec. 15.

A sales programme offers mink fur from both Europe and North America, such as "Pearl Velvet" and "Silverblue Velvet" mink, in addition to "Silver Fox", "White Finnraccoon" and Russian sable.

Saga Furs, which last year took over its North American rival NAFA, expects to sell all the pelts, compared with a 55% take-up so far in 2020 as a result of the coronavirus crisis.

"The market will strengthen, an increase in prices will help our business in general," Saga Furs CEO Magnus Ljung said of the industry, which has seen years of falling prices.

"We've already had more requests about foxes, if people see that there is a lack of mink, they could consider using something else," Ljung told Reuters.

LVMH's head of sustainability Helene Valade said this week that the French luxury group obtains fur from Finland. The owner of Louis Vuitton, Dior and Fendi, which relies on brokers to bid, says it is using only 100% certified mink, fox and finnraccoon.

Fur demand has been falling since the 1950s, except for a rise between 2000 and 2013 when it was popular on fashion runways and Chinese appetite for luxury pelts boomed, Lise Skov, an academic who researched the Danish fur industry, said.

A typical mink pelt sold for more than $90 at auction in 2013, while last year skins fetched around $30. This was despite a fall in global production to just under 60 million pelts last year, from more than 80 million in 2014.

Euromonitor predicts the value of fur and fur products, both real and faux, will fall by 2.6% this year.

A Danish breeder-owned cooperative that sold 25 million mink hides last year, or 40% of the global total, is considering selling its brand and other assets after announcing that it would gradually shut down operations over the next 2-3 years.

Kopenhagen Fur CEO Jesper Lauge Christensen told Reuters he had received expressions of interest from Chinese customers to take over the auction house's brand, which he said could be valued at up to 1 billion Danish crowns ($163 million).

It still plans to sell some 25 million pelts over the next two years, from Danish farms not infected by the virus, frozen stocks and foreign animals.

Animal activists hope the Danish debacle, which has had political repercussions in the country, will finish off the fur industry and demand for items such as $1,700 fur trinkets, $16,000 fur vests and $60,000 fur coats will disappear.

But for now, Kopenhagen Fur's Christensen said fashion brands in Europe had expressed concern they will not be able to find a similar quality to the Danish mink furs.

"One of the biggest challenges from the brand perspective is that the unique Danish qualities will be disappearing from the collection and you cannot source that product elsewhere."

He said he was looking at selling warehouse facilities and equipment such as automated vision machinery to grade the skins.

China, followed by Russia, is the biggest buyer of Danish fur as its own mink are considered of lower quality than those raised in Europe, where breeding standards are generally higher.

"We wouldn't choose Chinese-made fur due to its poor quality," Zhang Changping, owner of China's Fangtai Fur, told Reuters, adding that it had already bought enough fur at least for the first half of 2021.

Fangtai would shift to auctions in Finland if Denmark failed to supply enough mink in the future, he said.

Niccolò Ricci, chief executive of Italian luxury designer label Stefano Ricci which has many clients in Russia and eastern Europe, said he expected mink prices to increase by up to 50% but that high-end labels like his would continue to seek top quality pelts, mainly from U.S. suppliers.

"The real shortage could come from 2022, but by then we are hoping mink farmers in Canada, Poland, America and Greece will increase production to replace Danish output," said IFF head Mark Oaten. Russia and China are also expected to hike output.

"People will also be looking at other types of fur. Fox has been very popular for trimmings, in parkas for example. Wild fur is also becoming more popular, as is chinchilla," Oaten added.