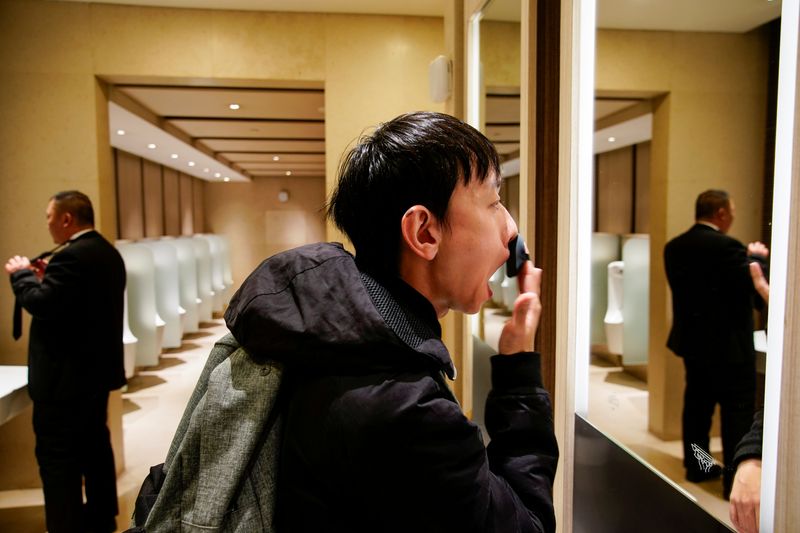 © Reuters. Liu Yuxuan, 22, a student, puts on his make-up at a restroom in a shopping mall in Shanghai 2/2

By Sophie Yu and Brenda Goh

BEIJING/SHANGHAI (Reuters) – China's radiant male skincare market has a fresh shine: A raft of domestic startups is tapping global investors for funds, with ambitions to rival giants like L'Oreal in a billion-dollar business serving image-conscious millennial men like Hou Junru.

The 24-year-old Shanghai education worker got into skincare as a student and splurged more than $1,000 on creams and lotions in e-commerce firm Alibaba (NYSE:BABA)'s giant Nov. 11 Singles Day promotion. "My need is to keep the skin moist and look pale," said Hou.

It's a priority shared by many of his peers, influenced by the spread of social media and South Korean pop culture that embraces a softer version of masculinity. Already the biggest in the world, the Chinese men's facial skincare market is forecast to hit 12.5 billion yuan ($1.90 billion) this year – and expand 50% to 18.5 billion yuan in 2025, research firm Mintel estimates.

Market research provider Euromonitor International estimates the men's skincare business in China, excluding post-shave products, was last year already more than three times the size of the U.S. market in dollar terms and more than twice the size of South Korea – with value growth through 2024 seen easily outstripping both.

Drawing on the huge reach of online retailers like Alibaba and JD (NASDAQ:JD).com, at least 10 new Chinese male skincare brands have been set up this year, according to media reports.

"A great number of small brands are emerging through online channels," Mintel said in a recent report. The "online shopping experience enables men to choose what they want quickly … online retailers can make it easier for men to seek out information and tips than in offline stores."

Six of the new players between them raised more than 300 million yuan between them, the founder of one brand told Reuters. Bertelsmann Asia Investments said it has invested in a new Shanghai brand, without saying how much, while others like SIG Asia and Redpoint Ventures have also placed sector bets, according to domestic media reports and startup research database CB Insights.

To be sure, with a combined share of 60%, according to Mintel, the China market remains dominated by three big foreign players – France's L'Oreal, Nivea maker Beiersdorf of Germany, and Japan's Rohto, home of the OXY brand. L'Oreal declined to comment for this article, while Beiersdorf and Rohto didn't immediately respond to requests for comment.

Still, beyond that dominance lies a hefty, fragmented chunk to be targeted by new local startups, hoping to emulate the success of Perfect Diary, a red-hot Chinese women's cosmetics brand whose parent raised $617 million in a Nasdaq listing last month.

Among the new breed of male skincare firms is Coen, founded in September by Huang Kai, a Xiamen-based entrepreneur who has shuttered his previous business selling men's apparel to focus on the beauty beat, with goods manufactured by firms in Guangzhou.

Huang, 31, said sales at Coen – a name that translates to "scientific and grateful" – topped 1 million yuan in two months via stores on e-commerce marketplaces. A 120 millilitre bottle of its flagship cleanser, 'Dragon Blood', retails for 64.90 yuan ($9.90) on Alibaba's Tmall platform.

With products like a beard depilatory cream in the pipeline Huang said he was in talks to raise funds from investors for what he described as a huge opportunity to tap new generations more open to skincare. "There are more than 200 million men born (in China) after 1995," said Huang.

A half-dozen of this year's bevy of startups have together already raised more than 300 million yuan, Huang said, declining to say which potential investors he's talking to.

"JACB will provide more professional products that may appropriately meet the skin care requirements of Chinese men consumers," said Zhu. JACB was not reachable for comment.

According to the CB Insights database, meantime, Redpoint Ventures and SIG Asia have invested in Make Essense, based in Shenzhen. Make Essense, SIG and Redpoint did not respond to Reuters' inquiries.

One major hurdle for the new breed of Chinese suppliers will be persuading customers who have used well-known foreign brands for years to switch over to them.

Education worker Hou, for instance, said he doesn't use new domestic goods, opting for brands like France's Guerlain and La Mer instead. "These products are used on your face so I don't want to try brands I haven't heard of," he said.

One avenue of possibility for domestic brands could be to expand into colour cosmetics like eye shadow – still a niche but growing segment, according to JD.com and Alibaba numbers.

"Why won't brands give us men more innovative products? Like women I also need skincare to maintain moisture and look white. I will buy if they are good!"