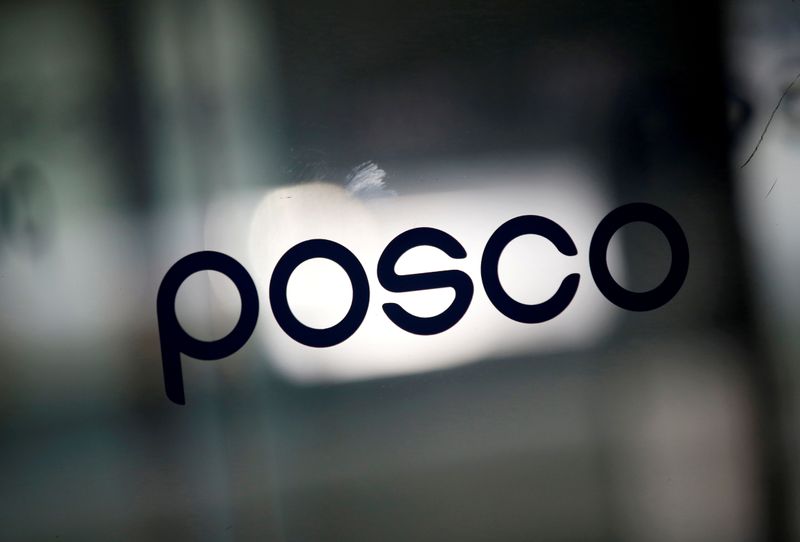 © Reuters. The logo of POSCO is seen at the company’s headquarters in Seoul

SEOUL (Reuters) – Giant South Korea steelmaker POSCO (NYSE:) has begun reviewing how it might end a joint venture with a firm controlled by the military in Myanmar in the wake of the coup there in February, two people with first-hand knowledge of the matter told Reuters.

As Myanmar’s army rulers continue a deadly crackdown on protest, with hundreds killed, the people said the Korean parent’s POSCO C&C arm is looking into either selling its 70% stake in the venture with Myanmar Economic Holdings Ltd (MEHL), or buying out its partner’s stake. It wasn’t immediately clear how much the 30% holding might be worth.

The internal discussions come amid growing scrutiny from shareholders and rights activists on international businesses still operating partnerships in Myanmar. Firms from Australia’s Woodside (OTC:) Petroleum and Japan drinks giant Kirin Holdings are among those who have already pulled the plug.

MEHL is among Myanmar military entities recently sanctioned by the United States and Britain. POSCO C&C has repeatedly said it hasn’t paid dividends to MEHL since the 2017 Rohingya crisis drew international criticism of Myanmar’s military.

But the people with knowledge of the matter say POSCO is wary of an abrupt steel exit because it could potentially jeopardise hundreds of millions of dollars earned from more lucrative gas projects operated jointly with another Myanmar state firm by an affiliate, Posco International.

“We won’t want to run the business like we do now, and we are reviewing restructuring our Myanmar operation,” one of the two sources with knowledge of the discussions told Reuters. The people declined to be identified citing internal company policy.

“This doesn’t mean we are rushing to make any decision, but two options that could potentially take place include selling our stake or buying out their (MEHL’s) stake.”

POSCO C&C previously said its business would not be hit by sanctions, and that it will only take action if it finds that MEHL is directly involved in the coup.

The profits POSCO makes from the Myanmar steel business – about 2 billion won ($1.77 million) last year – are dwarfed by earnings from Myanmar gas projects.

“Relatively speaking, (the) steel sheets business isn’t making big bucks. And its ownership structure is much simpler than some of POSCO’s other businesses in Myanmar,” the second source at the company said.

“But if we exit, it would be important to say ‘bye’ on good terms.”

Total of France and U.S.-based Chevron (NYSE:) have also worked for decades with MOGE, which is yet to come under sanctions, although the UN’s human rights investigator last month called for coordinated sanctions.

Exiting steel rather than gas would also be simpler due to a more complex ownership structure in the latter venture, the sources said.

While Posco International controls the gas projects via its 51% stake, India’s Oil and Corp (ONGC) and GAIL own 17% and 8.5% stakes respectively.

International pressure against the military and companies that have ties with it has steadily risen since February, with death toll close to 550 in the two months since the generals overthrew Aung San Suu Kyi’s elected government.

Shin Mee-jee at South Korea’s People’s Solidarity for Participatory Democracy was among those at pressure groups who said the country’s huge national pension fund – the National Pension Service (NPS) – should exert pressure on POSCO to cut ties with Myanmar’s military.

NPS is the largest shareholder in POSCO, with an 11.1% stake worth $2.42 billion, and the world’s third-biggest pension fund overall with nearly $1 trillion in assets.

“What a nonsense, to see our taxpayers’ money being channeled to kill the people of Myanmar through the (pension) … The government also needs to be more responsible about where the pension fund’s money is going,” Shin said.

An NPS spokesperson declined to comment when asked if the fund or its governing committee would take action to possibly exclude POSCO from its fund.

Meanwhile European investors are taking a greater interest in POSCO’s plans for Myanmar.

Sweden’s public pension fund, which owns POSCO shares, told Reuters it has quizzed the company over its Myanmar investments as it is concerned about human rights issues in the country.

Meanwhile Nordic investor Nordea told the Swedish arm of the Fair Finance network, initiated by Oxfam, that it had put POSCO “in quarantine until further notice” regarding its Myanmar plans.