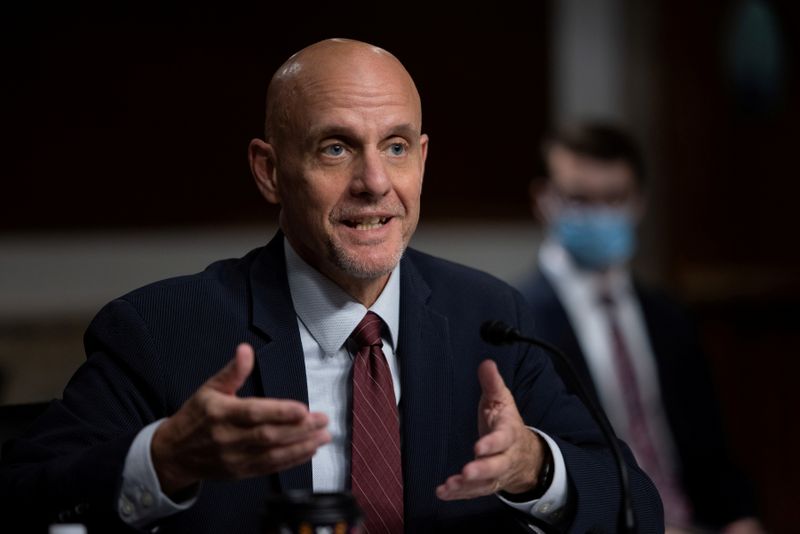 By Jeff Mason and Julie Steenhuysen

WASHINGTON (Reuters) – The U.S. Food and Drug Administration's chief had a "robust discussion" with the White House this week about the timeline for coronavirus vaccine approvals and believes vaccinating 20 million Americans this year is realistic, he said on Friday.

FDA Commissioner Stephen Hahn declined to lay out a specific timetable for approval of the vaccine developed by Pfizer (NYSE:PFE) and BioNTech but said he hoped the regulator would make a decision this month.

Many federal officials are expecting a vaccine approval within days of a Dec. 10 meeting of experts, though one FDA official recently said an approval decision could take weeks.

"We expect to move quickly," after that meeting, Hahn told Reuters in an interview.

Britain leapt ahead of the United States this week in approving Pfizer's COVID-19 vaccine, intensifying scrutiny on U.S. regulators as they consider whether to grant emergency use in the country that leads the world in coronavirus infections.

Hahn has come under pressure from outgoing President Donald Trump, who is eager to claim credit for a successful vaccine, to speed up the process.

The FDA head discussed the situation at a White House meeting with chief of staff Mark Meadows earlier this week to explain the timing and the "balancing act" required to make sure a vaccine is safe and effective.

"Mr. Meadows asked for a briefing and we gave it, and it went very well," Hahn told Reuters. "We had a very robust discussion, and I know that term sometimes is loaded, robust, but we did."

Though he declined to give a specific timeline for vaccine approval, Hahn gave a nod to its likelihood by endorsing the White House's goal of having 20 million Americans inoculated by the end of the year.

"I think given what we know about supplies, it is realistic," Hahn said of that goal. "It'll very much depend upon … the vaccination campaign."

Trump, a Republican who lost the Nov. 3 presidential election to Democrat Joe Biden but has declined to concede the race, said last week he deserved credit for the vaccine.

Dealing with the virus that has killed more than 276,000 people in the United States as well as the economic fallout from the crisis is one of Biden's top priorities once he takes office on Jan. 20.

Hahn said Biden's team had not been in touch with him but he would be happy to provide information about the vaccine approval process. The cancer specialist said he had not made plans for a new job after the Biden administration takes over.

To get to 20 million people, the FDA would need to approve both Pfizer's vaccine and the shot developed by Moderna (NASDAQ:MRNA) soon so they can go to the states quickly.

Data from late-stage trials of Moderna's vaccine, which uses the same mRNA technology as the Pfizer/BioNTech shot, is due to be reviewed on Dec. 17.

Based on a scenario in which people get two doses, Pfizer plans to provide the United States with enough vaccine for 12.5 million people and Moderna has said it will have enough for 10 million people this year.

Pfizer and Moderna have tested their products as two-shot vaccines given weeks apart, but Hahn said officials at the agency were combing through their data and might consider them as a single-shot if warranted.

"I can't prejudge what our scientists will decide, but we will look at that," Hahn said. A single shot vaccine would be much easier to manage because it would not require millions of Americans to return for a second shot weeks later, a major logistical challenge for public health officials. Trump's Operation Warp Speed program has struck deals with several drugmakers in an effort to help speed up the search for effective treatments to fight the global pandemic.

Of the vaccines being evaluated, only Johnson & Johnson (NYSE:JNJ)'s candidate is being tested as a single-shot vaccine.

A speedy vaccine approval could be a political win for Trump's outgoing administration, which has been pushing for effective treatments to help restore a sense of normality to daily life and a hard-hit U.S. economy.

Hahn said he would be eager to be inoculated as soon as there is an approval. "I will be first in line and I will encourage my family to take this vaccine," he said.