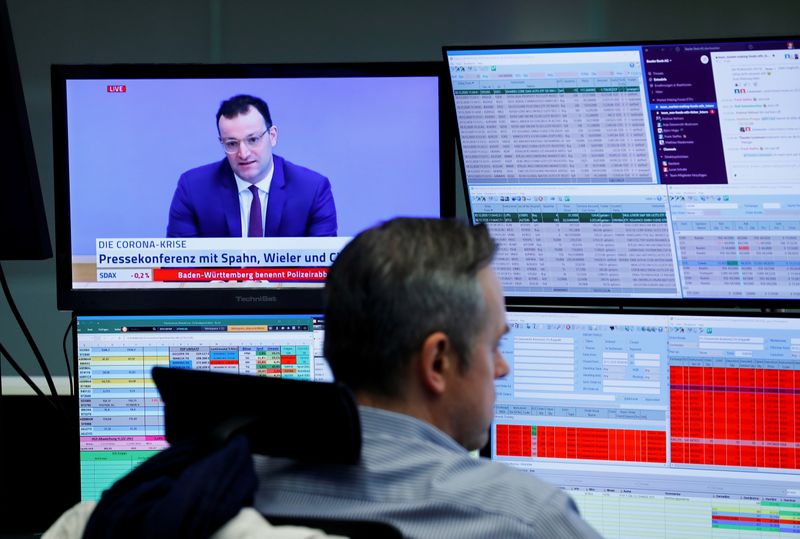 (Reuters) -European stocks retreated on Thursday as investors squared positions on the last trading day of the year, while tighter coronavirus restrictions in Britain and a move by the United States to raise tariffs on some EU products dampened sentiment.

Trading volumes were thin, with many traders away on New Year's Eve and major European bourses closed.

The pan-European STOXX 600 index recorded a 3.8% drop in 2020 – lagging its Asian and Wall Street peers that traded near record highs – as a rapid surge in coronavirus cases and concerns about a chaotic Brexit weighed on the continent's markets.

Still, the index remains only 7% below its record high after rallying about 50% from March lows, while hopes of more stimulus, the rollout of coronavirus vaccines and a Brexit trade deal sealed last week raised bets of a stronger recovery in 2021.

"Vaccines will inspire a global recovery, central banks will leave rates a zero even if inflation rises to fund exploding government deficits everywhere," Jeffrey Halley, a senior market analyst at Oanda wrote in a note.

"The search for yield in a zero percent world flooded with unlimited free money for the world's central banks, means the K-shaped recovery, asset price inflation scenario seems a certainty."

The FTSE 100 – on course for its worst year since the 2008 financial crisis – suffered a bigger blow as Prime Minister Boris Johnson ordered millions more people to live under the strictest COVID-19 restrictions to counter a new virus variant. (L)

Lender-heavy Italy's FTSE MIB was down 5.4% for the year, while Spain's IBEX – among the worst performers in the region – was on course for yearly losses of more than 15%.

The tourism-reliant economy was hit by pandemic restrictions, while a consolidation in Spain's banking sector – that brought the number of banks to 10, down from 55 prior to the 2008 economic crisis – failed to impress investors.

France's Airbus, Safran (PA:SAF) and liquor makers Pernod Ricard (PA:PERP) and Remy Cointreau fell more than 1% after the U.S. government said it would raise tariffs on EU products including aircraft components and wines from France and Germany.

The move was the latest twist in a 16-year battle over aircraft subsidies between Washington and Brussels.

French insurer Axa slipped 0.7% as it agreed to sell its businesses in Greece to Italian competitor Generali (MI:GASI) for 165 million euros ($202.9 million).

European markets will be closed on Friday for New Year's Day.