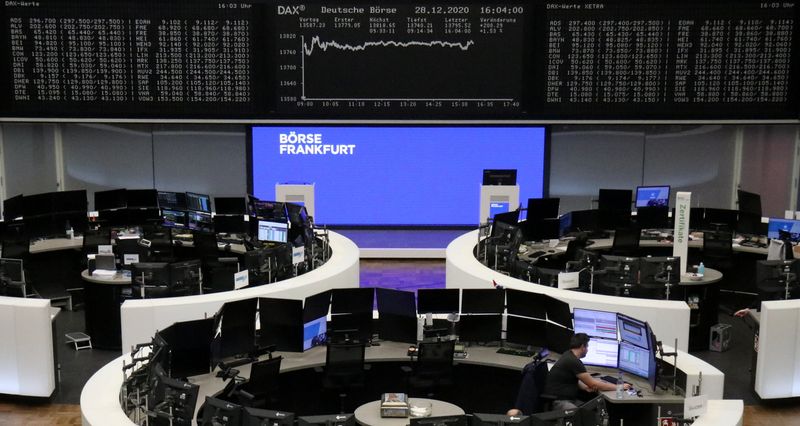 The pan-European STOXX 600 was up 1.2%, rising for a fifth straight session and scaling a new 10-month high.

UK stocks outperformed, with the blue-chip FTSE 100 jumping 2.6% in its first day of trading after the sealing of a Brexit trade agreement between Britain and the European Union on Thursday.

AstraZeneca (NASDAQ:AZN) rose 4.7% on news that the British government is expected to approve COVID-19 vaccine shots for emergency use within a few days. UK market gains were largely broad based.

The pound firmed slightly, with investors worried that the bare-bones nature of the deal leaves Britain far more detached from the EU than was thought likely in 2016.

The German DAX rose 0.5% and extended a record run after Wall Street rallied to all-time highs on hopes that a long-awaited U.S. pandemic relief package would be expanded. The U.S. House of Representatives voted to meet President Donald Trump's demand for $2,000 COVID-19 relief checks on Monday, sending the measure onto the Republican-controlled Senate. "This is but a resumption of the pandemic bull market, where cheer is stimulated by policy stimulus," Mizuho analysts wrote in a note.

Software group SAP rose 2.2% to provide the biggest boost to the DAX after its unit, Qualtrics International Inc, filed for a U.S. initial public offering.

Travel and leisure stocks rose the most among sectors, with TUI AG, Lufthansa and British Airways-owner IAG (LON:ICAG) rising between 3.3% and 10.4%.

The EU vaccination drive kicked off at the weekend, with health workers and residents of care homes across the bloc among the first to get the shots from Pfizer Inc. (NYSE:PFE)