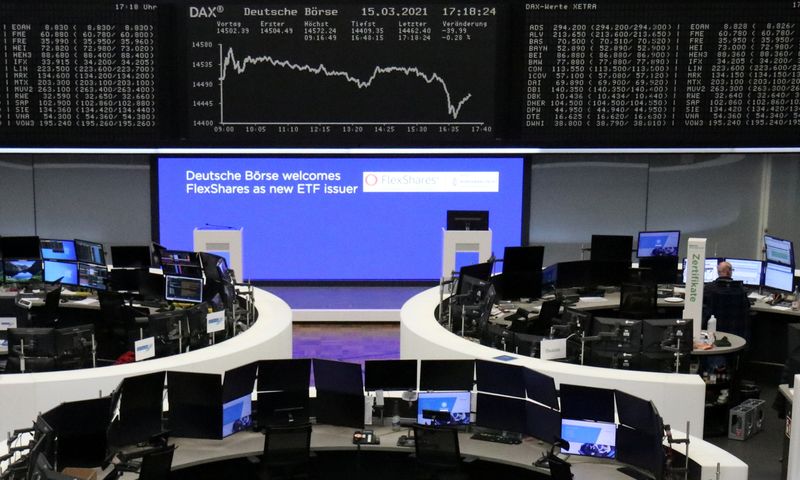 By Sruthi Shankar and Devik Jain

(Reuters) – Automakers lifted the German DAX to a record high on Thursday, while broader European stocks inched towards all-time highs after the U.S. Federal Reserve vowed to keep interest rates low despite forecasting a surge in economic growth.

The central bank is not expected to change its huge, crisis-fighting stimulus programme despite optimism about an economic recovery.

The pan-European STOXX 600 rose 0.3%, but eased from early highs due to losses in utilities, chemical and food & beverage stocks.

With the 10-year U.S. Treasury yield rising after the Fed decision, economically sensitive sectors such as automakers, banks and miners led the gains in Europe.

A recent rise in government bond yields have stoked worries about a pickup in inflation as trillions in dollars of stimulus help global economies emerge from the pandemic shock.

However, European stocks have benefited as a rise in yields sparked rotation into some of the cheaply valued sectors like bank and energy on hopes of a strong economic rebound.

"In combination with our expectations for a euro area PMI rebound and rising oil price, this would imply around further 15% outperformance of value versus growth by late Q3."

Volkswagen (DE:VOWG_p) jumped 3.4%, sealing its position as the most valuable company in Germany's DAX after it overtook software maker SAP on Wednesday.

Its shares have racked up a 28% gain so far this week and are on course to record the biggest weekly gain ever after it stepped up its switch to fully electric vehicles.

Swiss lender Credit Suisse (SIX:CSGN) gained 1.7% after it said it was overhauling its asset management business amid regulatory investigations into its dealings with collapsed Greensill Capital.