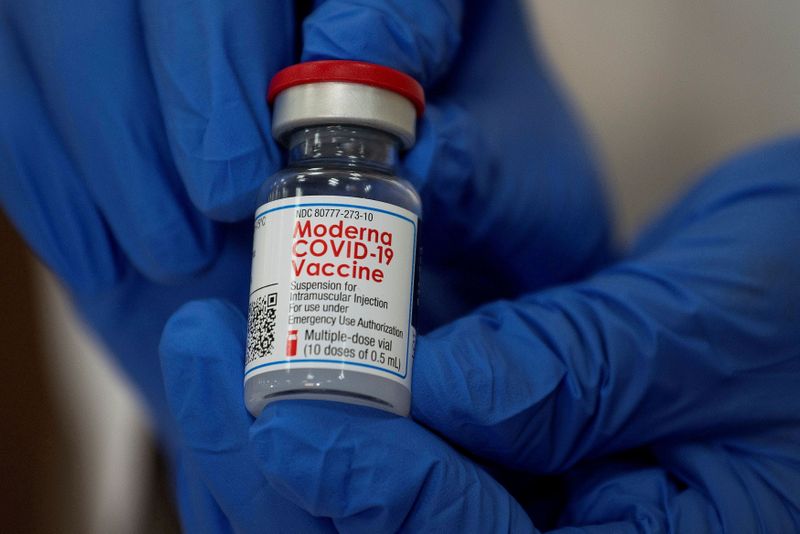 AMSTERDAM (Reuters) – EU countries could begin rolling out Moderna (NASDAQ:MRNA)'s COVID-19 vaccine as soon as next week after authorities approved the region's second shot on Wednesday, with more infectious variants of the virus adding extra urgency to inoculation efforts.

Vaccinating the European Union's 450 million people could be crucial to ending a pandemic that has killed almost 1.9 million people globally. Countries are scrambling to contain two variants found in South Africa and Britain that are more transmissible and have driven a surge in infections.

"With the Moderna vaccine, the second one now authorised in the EU, we will have a further 160 million doses. And more vaccines will come," European Commission President Ursula von der Leyen said on Wednesday.

She was speaking after the EU executive gave the vaccine the final go-ahead for rollout, hours after the EU drug regulator, the European Medicines Authority (EMA), approved the shot for use on people aged over 18.

The first deliveries to European countries will begin next week, Moderna said following the news.

The EU approval, coming just over a year since the first outbreak of the virus was identified in China, marks the fourth authorisation for U.S. biotech company Moderna's vaccine after the United States, Canada and Israel, and further validation of the new genetic mRNA technology it uses.

The EU approved a shot from Pfizer Inc (NYSE:PFE) and BioNTech SE (NASDAQ:BNTX), also based on mRNA technology, two weeks ago.

The EMA has given a conditional marketing approval for both, rather than the ultra-fast emergency use clearance issued by Britain, which the EU regulator says requires more detailed study of the data.

Additional authorisations for the Moderna shot are under review in Singapore, Switzerland and the United Kingdom, the U.S. company said in a statement after the news.

Moderna shares were up more than 4% in early New York trading. The company's value has surged more than 450% since February last year as the pandemic gripped the world and drugmakers rushed to develop shots.

The EU has ordered 160 million doses of the Moderna shot, enough to vaccinate 80 million people in its 27 member states, but the first initial volumes are expected to be small.

Moderna did not disclose details on volumes on Wednesday.

The vaccine was about 95% effective at preventing illness in clinical trials, which found no serious safety issues.

The Dutch national drugs authority, the CBG, said the Moderna vaccine was expected to be effective against the variant of the coronavirus detected in Britain, but cautioned this had to be confirmed by further research.

It has to be stored and shipped frozen, but does not require the ultra-cold temperatures of the Pfizer/BioNTech vaccine. Once thawed, it can be kept at typical refrigerator temperatures.

Stephen Evans, a professor of pharmacoepidemiology at the London School of Hygiene & Tropical Medicine, said the Moderna vaccine could be kept in a fridge for up to 30 days.

"Each vial has 10 doses so again, once the vaccine has reached room temperature there is a need to ensure that it is all used within 18 hours at most, so the logistics of delivering the vaccine are more complicated than for say flu vaccines," he added.

EU countries started vaccinations on Dec. 27 and are trying to catch up with countries such as Britain and Israel where large numbers of people have already received inoculations.

The campaign has already gotten off to an uneven start, with officials in Germany and France frustrated at the slow rate of progress.

Hundreds of thousands of Europeans have received the Pfizer-BioNTech shot since the rollout began just over a week ago. By comparison, Britain has administered more than a million of the vaccine in just under a month.

The Netherlands started vaccinations with that shot on Wednesday, giving its first injection to a 39-year-old care home nurse.

The Moderna vaccine is administered in two doses 28 days apart. Like the Pfizer shot, it relies on synthetic genes that can be generated and manufactured in weeks, and produced at scale more rapidly than conventional vaccines.

On Monday, Moderna raised its production target for 2021 to at least 600 million doses, up by 100 million.

Switzerland's Lonza Group has a contract to supply ingredients for the vaccine, while Spain's Rovi is assembling the shots for fill-finish services.