This article was written exclusively for Investing.com

Emerging market stocks were one of the hottest groups in 2020. But that started to change in late January and early February, as measured by the iShares MSCI Emerging Markets ETF (NYSE:), which has now fallen by 7.4%. The decline may not be over, based on an options analysis.

One reason for the recent weakness in emerging markets group is the strengthening and rising US interest rates. This is reducing investor appetite for the risk-on trade while also increasing cost to economies that may be conducting large amounts of business or issuing debt in US dollars.

Interestingly the strong dollar is helping to push the European market higher. For example, the has weakened materially versus the dollar. Thus, it should help to pull up inflation and growth back to the European continent and helping to send stock markets like those in Germany to record highs. Meanwhile, the UK, which is no longer part of the EU, has seen its currency, the , weaken, helping to boost its stock market to its highest level since the global pandemic began.

There is a double-edged sword from the dollar’s advance as it does not treat all markets equally. This has led to options traders taking bets, so the selling in emerging markets is not over. On Apr. 7, the open interest levels for the EEM May 21 $51 puts rose by approximately 32,000 contracts. It appears that these puts were purchased for a price of around $0.45 per contract. It would imply that the price of the EEM falls to approximately $50.55. That would be a decline of an additional 6.6% over the course of the next several weeks. 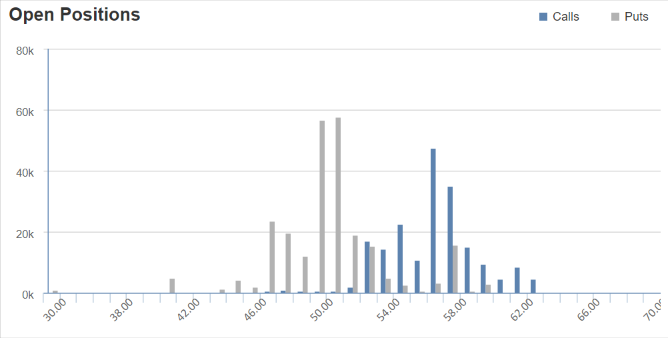 Additionally, there were a significant surge in open interest levels on Apr. 8 for Mar. 18, 2022, $45 puts, increasing by 10,000 contracts. This is a very long-term bet, going out almost one full year. It would appear that the trader paid nearly $2 per contract and would imply that the EEM is trading below $43 by next year, a drop of almost 21%.

If it is the case that lower prices lie ahead, the technical charts do not reflect that bearishness at this point. The EEM has been able to hold above a critical level of technical support at $52. Until that level of support breaks, it seems unlikely such a significant decline occurs. There are multiple support levels along the way, with a break of $52 sending the ETF lower to around $50, making the May options a viable candidate, but the March 2022 options contract may be much harder to achieve.

A steeper decline in the emerging markets will likely take further strengthening in the US dollar and interest rates to climb to even higher levels. Given the strong economic recovery that is now taking place in the US, it seems quite possible. However, if this happens and the euro declines against the dollar, it could provide a meaningful tailwind to markets in Europe over the next several months.

So, while it would seem that the emerging markets may struggle in the near term due to the rising dollar, not all foreign markets are likely to suffer the same fate.