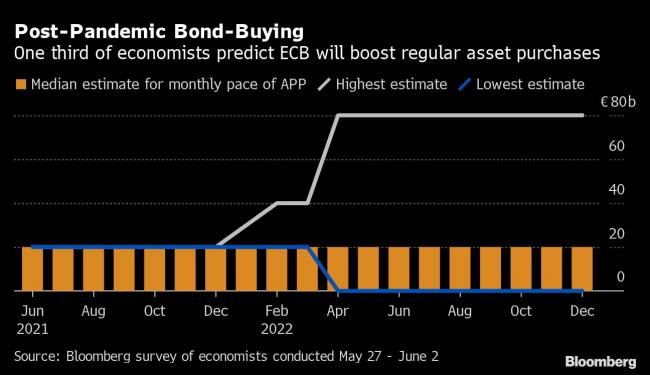 (Bloomberg) — The European Central Bank will extend its phase of faster bond-buying through the summer to ensure the economic rebound after coronavirus lockdowns morphs into a sustained recovery, according to a Bloomberg survey of economists.

The majority expects the ECB to keep purchasing about 20 billion euros ($24.4 billion) worth of debt a week until September before slowing down. Most expect the 1.85 trillion-euro pandemic program to finish in March 2022, as currently planned.

The central bank accelerated purchases in March to keep financing conditions for companies, households and governments across the euro area favorable. Ahead of their June 10 meeting, policy makers have pushed back against the idea that they’ll pull back on buying as governments ease curbs on public life.

With growing price pressures around the globe, investors are closely watching for signs that central banks are ready to moderate the flood of liquidity they unleashed during the pandemic. Inflation in the euro area accelerated to 2% last month, technically above the ECB’s goal, though most economists and officials have said it’s a temporary phenomenon that will fade before long.

“This seems to be no time for the hawks to bicker about more bond buying. Bloomberg Economics expects policy makers to opt for another three months of ‘significantly higher’ purchases through the Pandemic Emergency Purchase Program.”

President Christine Lagarde “will stress that the negative effects of the pandemic on the economy and hence inflation are still significant,” said Joerg Angele, an economist at Bantleon Bank. “However, regarding communication, this ECB meeting will be one of the most tricky ones in the past quarters.”

One complicating factor is that bond purchases are typically lower in the summer when market liquidity thins – a trend that could send the wrong signal to investors. Another is that the economic outlook is looking brighter, making it difficult to avoid a debate about a policy shift for much longer.

“The ECB can use the fact that we are heading into the quieter summer months to justify a slightly slower pace,” said Bas van Geffen, an economist at Rabobank. “That said, it may still be a bit of a hard sell to the market, requiring e.g. dovish rhetoric on medium-term inflation, even though the short-term economic outlook is improving.”

Europe’s vaccination campaign has picked up significantly after early stumbles, allowing governments to gradually ease restrictions on restaurants, travel and other activities. Recent economic indicators have signaled that the economy is starting to turn the page on the pandemic.

Three-quarters of economists surveyed expect the new forecasts presented at the meeting to show faster growth this year. The vast majority also said inflation projections for 2021 and 2022 will be revised upward.

“Fortunately for the ECB, the meeting comes early enough to still point to doubts and risks to the economic outlook, hence justifying a stance of ‘it’s too early to withdraw any kind of stimulus,’” said Carsten Brzeski, an economist at ING. “This stance will be very hard to maintain after the summer.”

Nearly half of the respondents expects the ECB won’t use up the full amount of the pandemic program. At the same time, one third expect an older purchase program that’s currently running at 20 billion euros a month to be expanded to provide continued support.

Another focus of the meeting is the ECB’s review of its strategy. Economists in the survey expect the results to be unveiled in September. Nearly eight out of ten said the central bank’s revised approach will include a “symmetric” inflation target, meaning policy makers will react equally to too-low and too-high results.

A majority also said policy makers will settle on a 2% inflation target — as opposed to the current “below, but close to, 2%” — and a closer focus on climate change.