With the long President’s Day weekend looming, there’s a slight change in tone on Wall Street. Stocks remain near record highs, but there’s a sense that things are slowing down a bit from the blistering pace of the last few weeks.

Today has the potential to start a lighter volume trend heading into the long weekend, even though a key earnings report is out this afternoon. Thinner volume can mean sharper moves, so people might want to be more cautious and consider keeping trade sizes a little smaller than normal.

New jobless claims continued to ease, falling to 793,000 last week from a revised 812,000 the week before. Still, that was a little above analysts’ expectations for 750,000, and doesn’t really move the needle much for this closely watched measure. Claims have been falling, but probably not as fast as most of us would like to see. Stock futures didn’t move much on the data, keeping their light pre-opening gains.

In the commodities arena, crude ticked a little lower to start the day after OPEC shaved its demand expectations. One possible takeaway here is that OPEC may be anticipating things coming back a bit more slowly from the pandemic, something we’ve also been hearing lately from economists.

Yep, we’re talking about Walt Disney (NYSE:DIS) and Kraft Heinz (NASDAQ:KHC). While DIS gets more attention, KHC’s stock has performed pretty well over the past year, and got a boost last week when The Wall Street Journal reported it was in talks to sell its Planters division to Hormel Foods (NYSE:HRL). That deal—which KHC confirmed today—fits in with KHC’s recent efforts to offload some of its products, including the well-known “Cracker Barrel" cheese brand.

KHC shares rose in pre-market trading after the nuts announcement, and after KHC beat Wall Street’s expectations for the quarter. By doing that, it joined about 80% of S&P 500 companies that have beaten analysts’ Q4 estimates.

Uber (NYSE:UBER) shares took a hit in pre-market trading despite narrowing its net loss in 2020 vs. 2019. The problem for investors appeared to be UBER’s failure to meet analyst’s quarterly revenue projections.

After this week, the earnings parade slows a bit, but some major retailers as well as semiconductor bellwether Nvidia (NASDAQ:NVDA) are still to come. Tomorrow’s schedule looks relatively quiet, though, and of course Monday is a federal holiday so things will be closed down.

Usually, you’d expect a little profit taking when the market approaches a long weekend at record highs. It’s hard to forecast that this time, because it still feels like investors have a collective case of FOMO (fear of missing out). Even when the market dipped in late January amid the short-squeeze frenzy, it popped right back thanks in part to continued optimism around vaccinations, stimulus, and reopening.

Working against this sentiment are some worrisome reports about new virus variants that can spread more easily and appear more deadly. It doesn’t take a degree in finance to know that any new lockdowns could quickly sap some of Wall Street’s reopening enthusiasm. Everyone imagines that trip to Disney World or just the local ballpark this summer, but it’s fair to say things are taking longer to return to normal than many of us thought.

Keeping that in mind, few should be surprised to hear Fed Chairman Jerome Powell yesterday saying the Fed remains committed to near-zero interest rates and $120 billion a month in asset purchases. Powell’s been resolute on that for months now. Powell’s speech is one possible reason bonds found some buyers yesterday, but the main cause was probably a benign consumer price index (CPI) report for January. It showed core year-over-year CPI ticking down to 1.4%, from 1.6% in December.

At the same time, the so-called “yield curve” between the two-year and 10-year Treasury yields is the steepest since 2017, and it appears that these positive U.S. long-term yields may be attracting some international investors who can’t find yield overseas.

Corporate bonds also found some love recently from investors looking for yield, analysts said, but even so-called “high yield” corporate bonds are about as low as they’ve ever been. Anyone getting into corporate bonds—especially high-yield ones—should remember that they come with risk, including possible default.

A lot of investors are also looking beyond traditional stocks and fixed income, one reason why the special purpose acquisition companies (SPAC) market continues to sizzle. This could reflect that there’s a lot of money coming into the market, which sometimes lends itself to people going outside the course of the S&P 500 Index or the Nasdaq 100. This behavior could continue, but again, caution is warranted. Make sure you’ve done your research and know what kind of risk you’re taking (and what kind of potential losses you can handle).

Yesterday we noted that the earnings recession might be over, as many analysts now expect Q4 earnings to top year-ago levels. But that’s 2020 data. What, if anything, could this mean for 2021?

Analysts already had been expecting pretty nice earnings results this year, which partially explains why the market’s had this long rally. Now some are starting to look for even better 2021 results, based in part on enthusiasm many companies have expressed during the current earnings season.

For instance, research firm FactSet now expects calendar-year earnings growth of 23.4%, up from 22.1% back in December. And research firm CFRA noted this week that 70% of the sub-industries in the S&P 500 have seen upward revisions to 2021 EPS estimates, with Energy, Financials, and Materials showing the highest percentage of companies increasing forecasts.

Near-term, this doesn’t necessarily mean a lot, because we’re basically in the “show-me state.” Meaning people can predict things, but then they have to happen or else they’re just fun numbers to chat about. If the earnings picture keeps brightening, however, and the numbers match expectations, it potentially means valuations—something a lot of analysts have been wringing their hands about lately—could begin to narrow without the market necessarily having to go lower. Meaning the “E” in price to earnings (P/E) could start catching up with the P. Which would be a very good thing for those who went long on stocks.

This actually could be starting to happen. The S&P 500’s 12-month forward valuation recently fell to 22, from 22.4 in December, FactSet noted. Keep in mind, however, that as the market “laps” last year’s pandemic-related earnings collapse, comparisons do get much easier for companies. In other words, it’s important to understand the context behind the improving numbers. 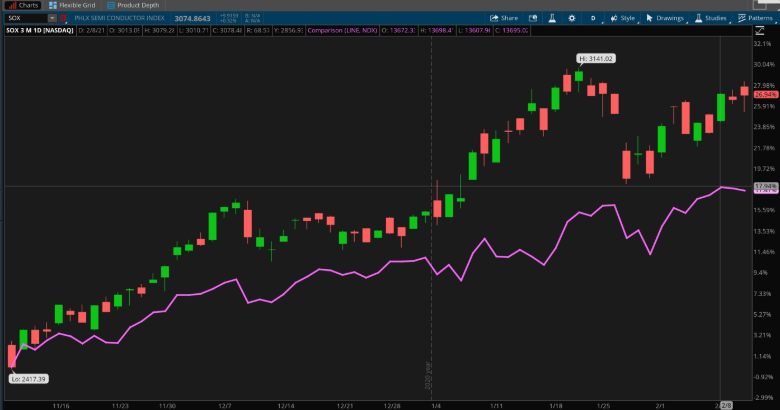 CHART OF THE DAY: TECH SPLIT. The PHLX Semiconductor Index (SOX—candlestick) has outpaced the Nasdaq 100 (NDX—purple line) over the last three months, though both are up sharply. Growing demand for semiconductor chips as the economy reopens could be one reason chip stocks are advancing more quickly than the broader Tech market, along with a worrisome chip shortage that’s started to develop (see below). Data Source: Nasdaq. Chart source: The thinkorswim® platform from TD Ameritrade (NASDAQ:AMTD). For illustrative purposes only. Past performance does not guarantee future results.

Volatility Chronicles: One really amazing development over the last few sessions is the way the Cboe Volatility Index (VIX) just put on the brakes and dropped right back to where it was before the late January short-selling frenzy. Back then it jumped from 21 to 37 in just a day. Lately, it’s trading back near 22. We did see a similar quick move to the upside and back down last October, so it’s not unheard of. But it is unusual to see VIX depart from an established range and then return to it so quickly. Don’t be surprised if there’s a second act, especially considering that options trading volume hit record highs last year and remains heavy. In addition, the VIX futures complex is in contango, with prices farther out higher than the spot price. That means futures traders, at least, appear to anticipate more uncertainty ahead as we approach a long-awaited spring thaw and continue grappling with the virus.

Toppy Tech: Some of the biggest Tech “mega-caps” like Microsoft (NASDAQ:MSFT), Apple (NASDAQ:AAPL) and now Tesla (NASDAQ:TSLA)—which is sometimes grouped with Tech—seem to be bumping their heads against resistance. Yesterday and also last Friday, softness in the Tech sector appeared to start weighing on the S&P 500 Index, which is dominated by the “FAANGs” and their friends like MSFT and TSLA. There’s double trouble for the mega-caps. First off, they’ve all come a long way very quickly after that slump last September and October. That’s caused valuations for some, including Amazon (NASDAQ:AMZN), AAPL, and Netflix (NASDAQ:NFLX) to look a bit stretched in the eyes of some analysts. AAPL’s price-to-earnings (P/E) ratio, for example, is around twice the stock’s historic level. Say what you want about low interest rates making P/E less important, but they do seem like a metric many investors still watch.

Second, earnings season is basically over for big Tech, making it hard to find any major near-term catalysts. Instead, many investors are flocking toward cyclical sectors like Financials, Energy, and small-caps that tend to do best in a recovering economy. Which also partly explains why the semiconductor sector has pretty much avoided the pressure felt by the mega-caps. A growing economy could raise demand for semiconductor chips found in so many consumer products, up to and including big ones like automobiles.

Chips and Other Staples: Yesterday’s core consumer price index came in flat. The 10-year Treasury, while up more than 20 basis points since the start of the year, is at a tepid 1.14%. And last week’s payrolls report reminded us just how far we are from the pre-COVID full employment levels. Why then, is there all this inflation talk swirling around? Much of it has to do with expectations—particularly the concern that the absorption of all this fresh fiscal stimulus that’s reportedly on its way, may open the floodgates on consumer demand once the U.S. reaches herd immunity.

While that’s certainly a valid concern, there may be another concern—commodity shortages and geopolitics. And we’re not just talking corn, soybeans, and crude oil (though those commodities have certainly been heading higher over the past few months), there are also growing reports of semiconductor shortages. From automakers to Apple, the nation’s tech giants have reported chip shortages that are growing increasingly acute. Geopolitics are typically in flux during the transition of power in the U.S., and COVID-19 may be exacerbating the issue. Some have even called for a re-shoring of semiconductor manufacturing as a matter of national security. Chips are the staple of the modern economy and, as anyone who struggled to buy toiletries last April knows, when you run short of a basic necessity, it can cause a major—even inflationary—disruption.