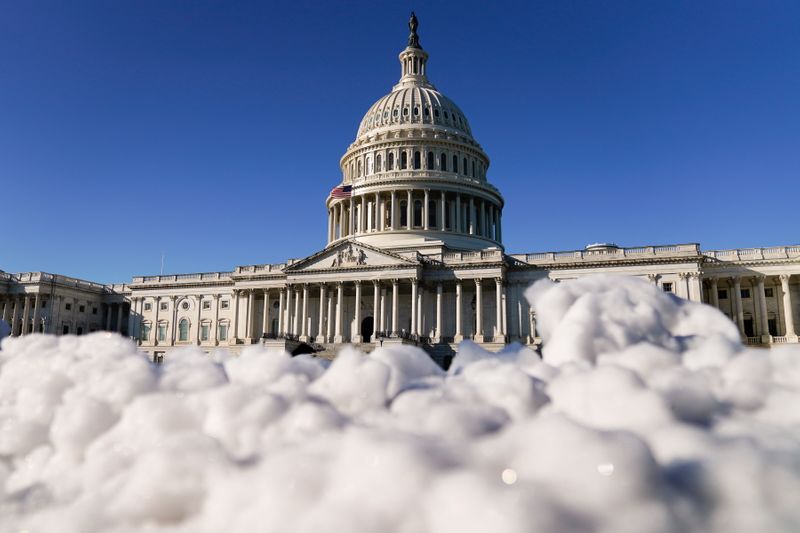 Investing.com – The Dow closed at record highs Wednesday, as violent protests at Capitol Hill to stop the confirmation of President-elect Joe Biden’s victory was offset by a wave of optimism that more stimulus is on the way as Democrats won the Georgia runoff elections to take control of the Senate.

Protests quickly turned violent after demonstrators stormed the Capitol building after President Donald Trump urged them to protest the confirmation of Biden’s victory, before calling for calm.

The turn of events triggered a wave of caution, prompting traders to rein, albeit temporarily rein in their bullish stimulus-led bets on stocks.

Following the victory in both races, the Democrats now match the 50 seats the Republics hold in the Senate. But Vice President-elect Kamala Harris will have the tie-breaking vote, paving the way for Democrats to carry out their legislative agenda amid control of both chambers of Congress and the White House.

Senate Minority Leader Chuck Schumer said that increasing stimulus checks to $2,000 would be one of the first legislative proposals.

But some on Wall Street have suggested the stimulus-led boost to the economy could trigger the Federal Reserve to tighten policy sooner than expected.

The legislative agenda could "close the output gap by roughly four to six quarters," ahead of schedule, improve the unemployment rate and set inflation on path to reach 2%, which which "will put the Fed in a position to lift off in early 2023, a full year ahead of our previous forecast," Jefferies (NYSE:JEF) said in a note.

Financials led the broader market higher, with banking stocks in the ascendency – ahead of the quarterly earnings report due next week – driven by a jump in Treasury yields as the United States 10-Year rose above 1% for the first time since March.

Wells Fargo (NYSE:WFC), Bank of America (NYSE:BAC) rallied 7% and 6% respectively, while JPMorgan (NYSE:JPM) was up 5%.

Crude inventories fell 8 million barrels, compared with a forecast for a 2.1 million-barrel decline, according to the Energy Information Administration.

Tech lagged the broader move higher as investors fear big tech is set to come under increasing regulatory scrutiny with democrats at the legislative helm.

Apple (NASDAQ:AAPL), Microsoft (NASDAQ:MSFT), Amazon.com (NASDAQ:AMZN), Facebook (NASDAQ:FB) and Alphabet (NASDAQ:GOOGL) the so-called Fab 5, which make up for about 25% of the S&P 500, traded in the red.