Doordash (NYSE:DASH) proved to be a huge success in its trading debut Wednesday, when shares of the food delivery platform skyrocketed, showing investor appetite for technology stocks

The San-Francisco-based DoorDash surged as much as 92% on its first day of trading, closing at $189.51 a share after the company raised $3.37 billion in its initial public offering. The first-day jump, the third biggest this year in the US for a large IPO, gives DoorDash a market capitalization of $60 billion and a fully-diluted value of $71.3 billion. On Thursday, shares closed at $186, losing 1.85% on the day. 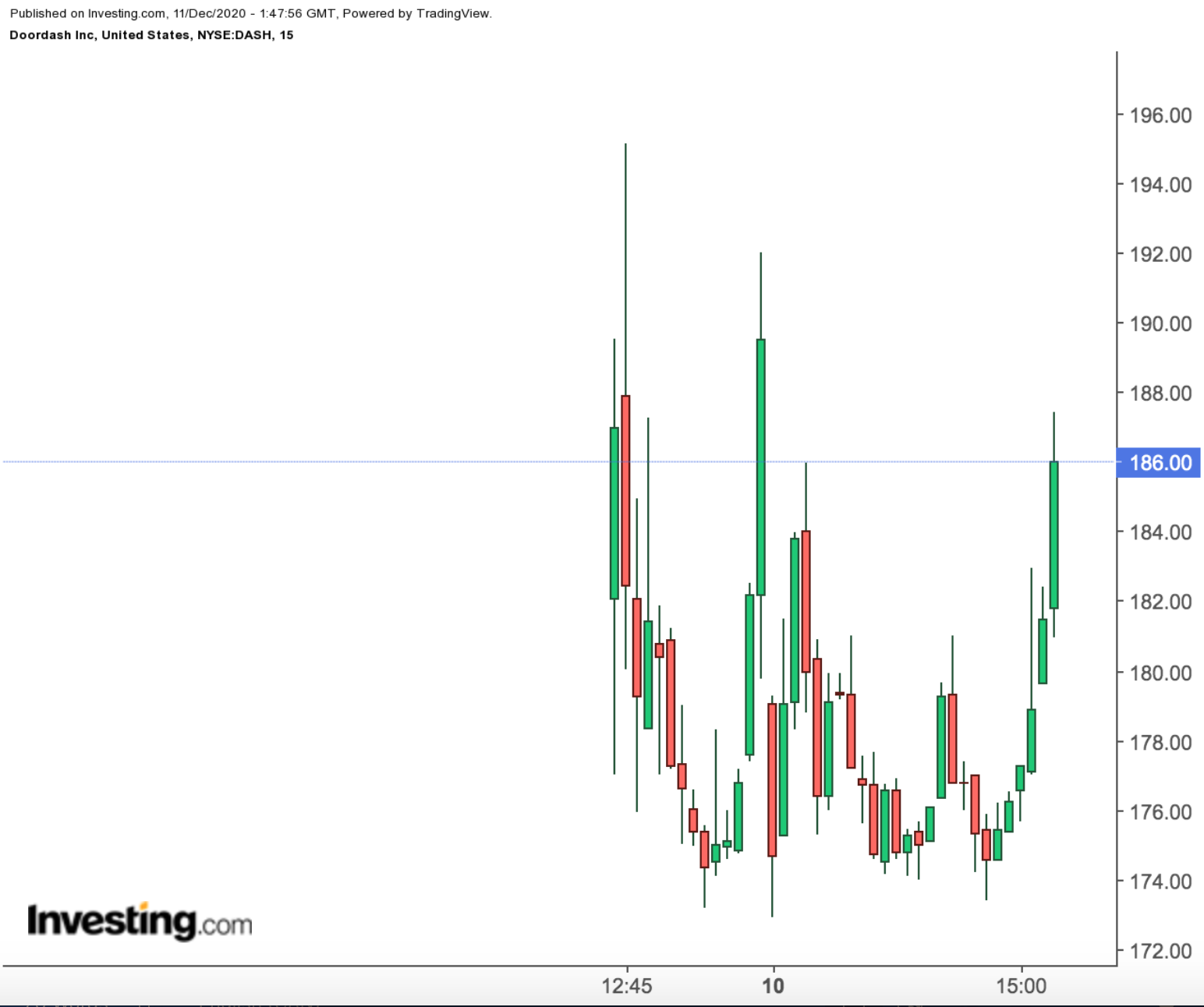 The stock’s massive surge on the first day of trading shows that investors are comfortable owning stock of a company that is in a tough market where many companies are striving to seize on the pandemic-fuelled boom in demand for meals brought to our doors.

Despite these challenges, DoorDash's business model has a unique appeal that is hard to ignore. First, is the company’s growing subscription program, which shows the loyalty of its customers and the potential of recurring sales.

DoorDash’s subscription program had more than 1 million subscribers from August 2018 to August 2019. That number soared to over 5 million as of Sept. 30, 2020, according to DoorDash’s initial public offering filing.

About 28% of DoorDash’s more than 18 million users are now considered monthly subscribers, far exceeding Uber's (NYSE:UBER) 1 million subscribers by the end of the third quarter even as the company had 78 million monthly active platform users across Rides and Eats. Wall Street Journal's Laura Forman wrote in an analysis piece last week:

“DoorDash’s early focus on customer loyalty seems to have played a role in its transformation from a delivery upstart to the US market leader. So has cornering the suburban markets, which have proven to be a pandemic gold mine with higher order values and lower operating costs in many cases. But customer allegiance could become even more of a factor next year when consumers begin to venture back out to restaurants.”

This first-mover advantage has helped DoorDash to capture 50% of the US market’s food-delivery business, far ahead than its main rivals, including UberEats, Grubhub (NYSE:GRUB) and Postmates, according to its filing documents.

With fewer than 6% of US residents currently using its service, DoorDash says its business has much more room to grow. Revenue in the first nine months of the year more than tripled and its net loss narrowed from a year earlier as the pandemic fuelled news orders.

With its top position in food delivery, DoorDash plans to use its platform to eventually provide on-demand delivery for any product.

As the company said in its prospectus:

“While food itself is a category that has a long runway for growth, we believe the network we have built ideally positions us to fulfill our vision of empowering all local businesses to compete in the convenience economy.”

With these prospects, however, DoorDash is a service that thrived during the pandemic. Investors should also take into account the post-pandemic economy, which could considerably reduce demand for food deliveries at doorsteps. Big players in this game are the restaurant owners who, in some cases, pay as much as 30% of the order in fees to DoorDash.

At the same time, it’s almost impossible to predict from an IPO success whether the company will be successful over the long run or will leave its investors in trouble. History tells us that an IPO’s earlier success is no guarantee of the company’s long-term viability.

A Bloomberg analysis of companies that debuted since the financial crisis and popped more than 100% in their first day of trading shows that most stocks have fallen since their initial surge.

DoorDash's 90% pop on its debut shows investors have great faith in the company’s business model. Due to this Wall Street euphoria, the delivery operator has been able to fetch an excellent valuation. But soon after an IPO surge is perhaps not an ideal time for long-term investors to take a position. Waiting on the sidelines for a better entry point is a more prudent strategy at this point, in our view.