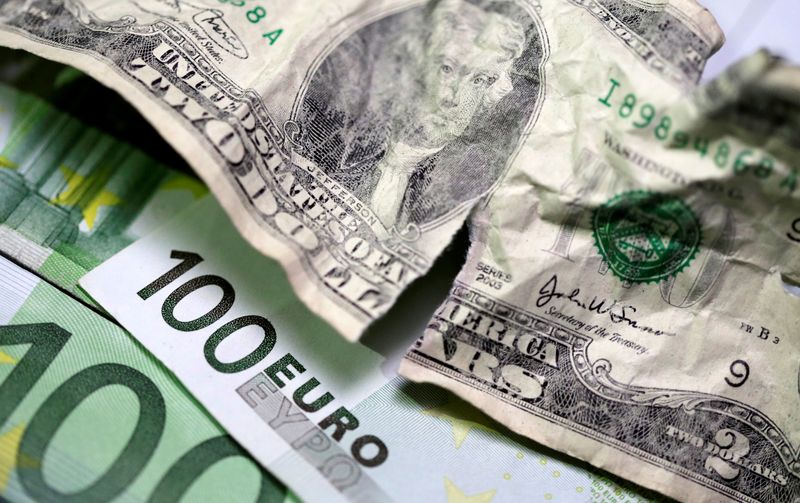 BENGALURU (Reuters) – The dollar's weakening trend is still in play, with the currency predicted to stay range-bound or fall in the next three months, according to a majority of strategists in a Reuters poll, suggesting the currency's recent strength was just a blip.

After a sell-off that began last year, the dollar rose in four of the past five weeks and was up over 1% for the year as traders reviewed heavy bets against the currency.

But all factors underpinning the dollar's strength were expected to be transient, according to the Feb. 1-4 poll of over 70 analysts. They kept their weak dollar predictions over the coming year largely unchanged from the January poll.

More than 85%, or 63 of 73 analysts responding to an additional question, expected the dollar to stay around current levels or decline over the next three months. Only 10 expected it to rise from here.

"There's a lot more downside for the dollar, and our longer-term perspective is for dollar weakness, not for dollar strength," said Steve Englander, head of global G10 FX research and North America macro strategy at Standard Chartered (OTC:SCBFF).

"The expectations investors came in with at the beginning of the year have ended up being derailed somewhat, but in this case we think temporarily."

Reflecting that outlook, the latest positioning data showed currency speculators were still betting against the dollar, despite trimming some of their dollar shorts last week from the largest in nearly 10 years in the prior week.

When asked about dollar positioning by the end of February, just over half, or 29 of 55 analysts, said bets against the currency would either stay around current levels or increase. Twenty-four predicted a decrease in shorts. Only two expected a reversal to net long positions.

"Current net short positions are around extreme levels, making it harder to increase from here. But we also see little reason to expect a sharp reversal within the next weeks," said David Alexander Meier, economist at Julius Baer.

Despite a continued rally in risky assets, the dollar, which usually moves in the opposite direction of stocks, has strengthened as investors turned their focus to a widening gap between the strength of the U.S. and Europe's pandemic recoveries and vaccine rollouts.

(For a Reuters graphic comparing the annual performances of the U.S. dollar and the S&P 500: https://fingfx.thomsonreuters.com/gfx/polling/xlbpgykjypq/DXY.PNG)

The world's largest economy was forecast to lead on both counts, with the euro zone weeks behind the U.S. in immunizing its population.

Still, the euro, which has lost more than 1.5% for the year and was trading near nine-week lows against the dollar on Thursday, was forecast to recoup all those loses and gain over 4.0% in the next 12 months.

That is widely attributed to the Fed's worries about the pace of the recovery, putting even more weight behind its pledge to keep monetary policy in an "accommodative" stance for what may be months or even years to come.

"About 90% of this (the euro move) is the U.S. side of the equation, and that's not changed. What's changed is that we went into this too fast and that is correcting."

And it's not just against major currencies – the dollar was also forecast to weaken against emerging-market currencies in the year ahead. [EMRG/POLL]

"A lot of the exceptionalism of the dollar has to do with its scarcity. The prospect now is that there will be no scarcity of dollars and in fact there will be an abundance as far as the eye can see," said Standard Chartered's Englander.

"The Fed is going to be forced into this (providing dollar liquidity), because they know what will happen if they raise long-term interest rates or allow long-term rates to go back up."