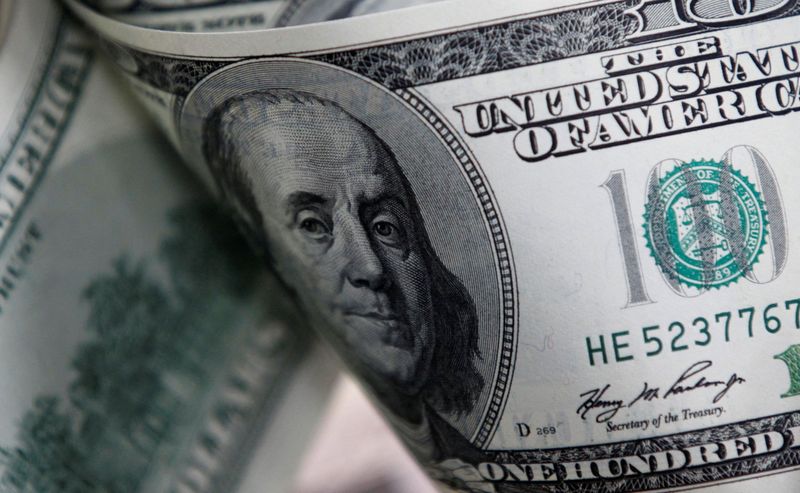 TOKYO (Reuters) – The U.S. dollar headed for its worst week since early February against major peers on Friday, weighed down by a retreat in Treasury yields and fatigue after the currency’s breathless 10%, 14-week surge.

Even with global stocks continuing to slide amid risks to growth from aggressive monetary tightening, led by the Federal Reserve, and China’s strict lockdowns to quash a COVID-19 outbreak, the dollar’s appeal as a haven was eclipsed by a decline in U.S. yields as investors rushed for the safety of Treasury bonds.

“The dollar was ripe for a pullback,” Edward Moya, senior analyst with OANDA, wrote in a note to clients. “Across the board weakness might continue a while longer.”

Other safe haven currencies continued to rally overnight, as a key index of global equities headed for a seventh weekly decline, its longest ever.

The yen headed for a second-straight weekly advance, with the dollar dropping 1.16% to 127.785 yen since last Friday.

Concerns grew that the Fed and other central banks have fallen behind the curve in combatting super-hot inflation, and will need to be ever more aggressive in tightening policy, inflicting pain on the economy as a consequence.

The war in Ukraine shows no sign of abating either, darkening the outlook for commodity price-driven inflation.

The Australian and New Zealand dollars have drawn some support from signs of a reopening in their major trading partner, despite the risk-off tone in equity markets.

“China’s strict lockdowns are the main reason why AUD has diverged so much from the level implied by its fundamentals,” Carol Kong, an analyst at Commonwealth Bank of Australia (OTC:), wrote in a note.

“We remain confident AUD can rebound strongly once lockdowns are eased because of China’s commitment to ramp up infrastructure spending.”

New Zealand’s kiwi though held all of the previous day’s 1.41% jump, ticking up a bit more to $0.63845. The Reserve Bank of New Zealand sets policy next Wednesday, with expectations for another half-point increase to the key rate.

Westpac analysts warned not to count the dollar out, even if its rally was “losing some of its vitality”.

“It’s still far too early to call a long-term peak, amid unsettled global market conditions and a resolute Fed,” the Australian bank’s analysts wrote in a research note, recommending buying on dips in the 102s and targeting 105 multi-week.