On Thursday, the S&P 500 experienced its biggest drop in three weeks. As worrying as that sounds, this modest, 0.4% decline highlights just how calm the market has been lately. 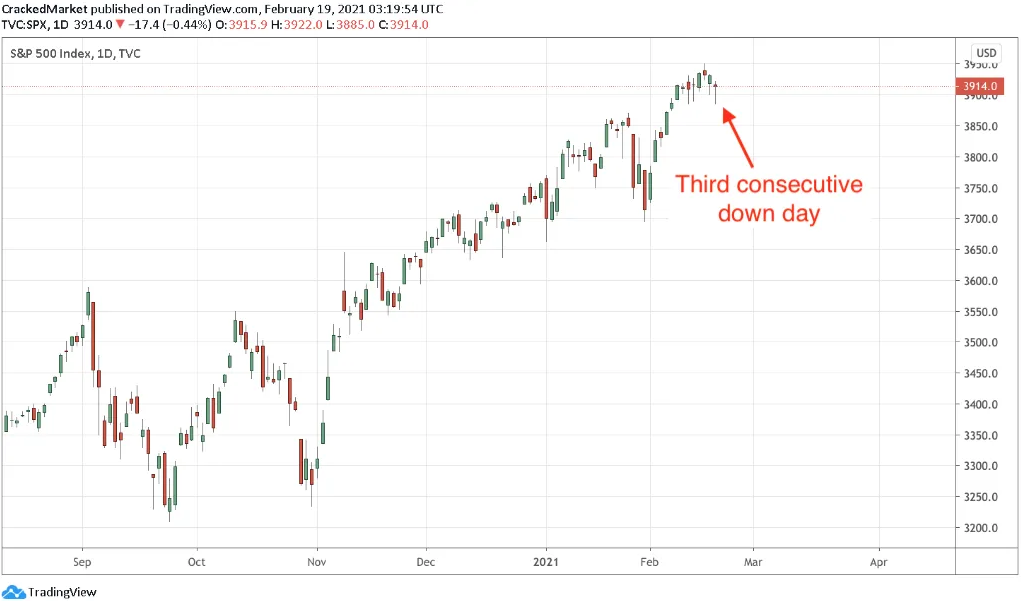 January’s late stumble was fueled by the truly shocking behavior in a handful of “meme stocks”. But just a few weeks later and that already feels like ancient history as GME, AMC, and BB have already returned to more pedestrian levels. As expected, their rise and subsequent collapse didn’t affect the wider market and all of the old rules still apply.

Even with the index falling all three trading days this week, prices remain within 1% of all-time highs.

As I wrote yesterday:

We’ve had plenty of bearish headlines over the last several weeks and months. If bad news was going to take this market down, it would have happened by now. As I often say, a market that refuses to go down will eventually go up.

And despite today’s third loss, nothing changes. This remains a resilient market and even the strongest ones cannot go up every single day.

But just because this week’s losses have been modest doesn’t mean the index cannot slip even further. Everyone knows stocks take a step back for every two-step forward.

Maybe this latest bout of selling continues Friday and into Monday. But even if it does, no big deal. As prudent traders, we have predetermined stop-loss levels and we will get out if they get hit.

And if this dip proves to be yet another false alarm, no big deal, it is easy enough to get back in when the index bounces.

While I believe this market will continue higher over the near-term, this isn’t a hill I’m willing to die on. If I’m wrong, I get out and then try again next time. But until my stops get hit, I’m holding for higher prices.