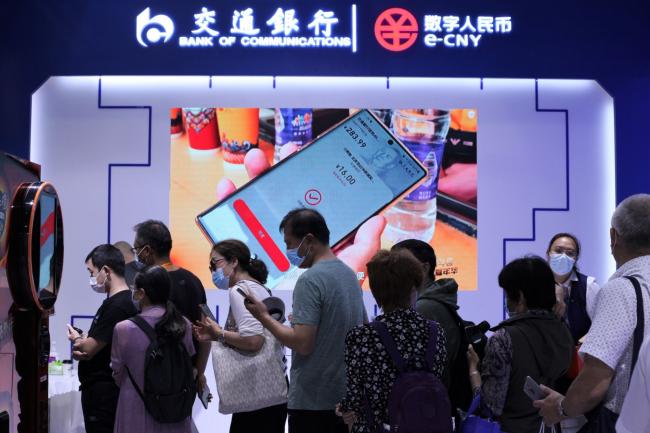 © Bloomberg. Visitors lined up to buy discounted coffees from a machine using digital yuan at the Bank of Communications booth at the trade fair in Beijing.

(Bloomberg) — Swipe your bracelet, watch or even a walking stick, and you can pay for your goods with digital yuan.

These are just some of the quirky gadgets that China’s central bank, lenders and technology giants are showcasing to Beijing residents ahead of a broader rollout of the e-currency when the city hosts the Winter Olympics in February. The wearable devices, embedded with a digital yuan chip, can be tapped against a scanner, transferring the currency from an e-wallet without needing an internet connection.

The People’s Bank of China is pulling out all the stops to promote the e-currency to a population far more used to transacting on a daily basis using Tencent Holdings (OTC:) Ltd.’s WeChat Pay and Alibaba (NYSE:) Group Holding Ltd.’s Alipay. The central bank has rolled out pilot programs in 11 cities and regions from Shenzhen to Hainan so far and has recruited major banks and technology firms to help get an otherwise indifferent population to make the switch to the e-yuan.

Beijing consumers got their first taste of what a digital yuan future might look like during a services trade fair in the capital city last week, which attracted 36,000 visitors. Major banks like Industrial & Commercial Bank of China (OTC:) Ltd. and China Construction Bank (OTC:) Corp. as well as tech firms like Alibaba’s Ant Group Ltd. had booths promoting the e-currency.

Hao Xiujie, a 45-year-old resident of the city, queued for 20 minutes at a booth run by Bank of China Ltd. to sign up for an e-yuan account and get a cup of cappuccino for one cent of the digital currency.

“I’ve always wanted to try the digital yuan and experience how different it is from Alipay and WeChat Pay, after seeing it so much on TV,” she said, as she waited in line for her cup of coffee. “It’s really easy to use, whether it’s paying or topping up.”

Long queues formed at vending machines that take digital yuan to buy stamps, drinks and Winter Olympic-themed souvenirs. A handful of shops including a book store, dental clinic and museum shop set up booths to sell products that could be bought with digital yuan at the fair.

Li Jun, 36, who works in asset management and had spent 200 yuan ($31) in a free digital-yuan handout in February, said he would prefer digital yuan, which is backed by the central bank, to WeChat Pay and Alipay when it’s officially launched, because he feels it’s safer.

At Ant Group’s booth at the Beijing fair, staff showed visitors how to open the e-CNY wallet through the Alipay app and top-up funds through it. E-commerce giant JD (NASDAQ:).com Inc also showcased vending machines and self-service payment machines at its booth. Food delivery firm Meituan launched a promotion in nine cities last week that gave out free digital yuan to users who register for shared bike rides.

Bank officials at the fair said it’s no easy job to promote the digital yuan, as its use is still limited in real life and many people still can’t wrap their head around the concept of a virtual legal tender. But the upcoming Winter Olympics will be a key opportunity to popularize the digital yuan, not just among Chinese but also foreign visitors.

At the Beijing trade fair, a staff member at Postal Savings Bank of China Co. demonstrated an ATM-like machine that can take foreign currency notes and convert them into digital yuan stored in a card. China Construction Bank also had a similar machine that allows foreigners to apply for an e-CNY account with their passports and overseas mobile phone numbers.

ICBC showcased a subway turnstile that takes digital yuan by tapping your phone in the same way that Beijing commuters have been using WeChat Pay and Alipay to pay for rides for years.

Staff at the bank also demonstrated a walking stick mounted with a digital yuan chip that enables transactions by near-field communication technology, requiring no internet connection. The device is meant for elderly users who may not have access to smartphone technology, part of the PBOC’s goal of promoting financial inclusiveness.

ICBC has tested over 360,000 application scenarios, and entered strategic partnerships with nearly 60 banks.

The bank is “actively exploring innovative uses of digital yuan in banking, wealth management, investment and financing, as well as securities and asset trading,” a spokesperson said in a statement. “We are building convenient payment and settlement methods around supply chain management, smart transportation and wearable devices.”

Among all the wearable products, credit card-like wallets have been the easiest to promote, according to Fu Jiajie, manager of the technology support department at CEC Huada Eletronic Design Co. Ltd., which manufactures chips used for digital yuan. An official at the Agricultural Bank of China (OTC:) Ltd. said about 2,000 cards have been issued to individuals and companies for the initial phase. Another 30,000 card-wallets will be distributed over the Winter Olympics, according to Fu.

Consumers, merchants and bank officials all agree that it’s critical for the yuan to be used in more ways for it to become popular. PBOC officials have said they won’t use administrative measures to force people to adopt the digital yuan.

“People are already so used to WeChat Pay and Alipay, so many are reluctant to get digital yuan all of a sudden,” said Chen Ling, a 26-year-old staffer at a booth selling Palace Museum’s souvenirs. “Even though it is more convenient than those when you are using it” because of its simpler and easy to use app interface design, she said.