I sold this stock for a 4X return. It was a big gaffe.

We’ll talk about their haul in a moment. First, let me come clean with my hiccup.

Twenty years ago, when I was young, naïve, and relatively broke, I piled my life savings into Dick’s Sporting Goods (NYSE:). My massive $500 stake netted me about 25 shares.

DKS had recently gone public. I was completely “dialed in” to the offering, having spent much of my youth combing the aisles of the nearby Dick’s Amherst, NY retail location. (What your editor lacked in athletic gifts, he made up for with hustle and, of course, the latest sports gear!)

Dick’s was growing earnings at 20% per year and trading for just 12-ish times profits. It was—and still is—the best sporting goods retailer in America. When I bought the stock it seemed like a sure thing, because the company planned to expand coast to coast, providing plenty of runway for higher earnings.

The stock quickly doubled. And then it doubled again. Which cued my first regrettable investing decision.

As my paper profits grew, I began to subscribe to online financial newsletters. And read about the indebted American consumer. And why a massive recession was “inevitable.”

In other words, I began to actively pollute my investing mind!

The “doom and gloom” stories played out in 2008. But I had cashed in my DKS shares and sat smartly—so I thought—in cash.

The permabears were eventually right. But though they sold well, they never got back into their stocks. Rather than buying the market in 2009, most newsletters advised staying put, holding cash and waiting for the “next leg” down. Which hasn’t come!

And twelve years later? DKS has rallied more than 4,000% since its IPO. Forty times.

I couldn’t undo my previous investing transgression. But that’s OK. It was time to make things right for my Hidden Yields subscribers.

You see, DKS is even cheaper now than it was then. This time last month, shares traded for just 6-times free cash flow! Mainstream outlets like Morningstar panned the retailer’s prospects with a “one star” rating, but anyone who visited a store lately knew better.

DKS is one smart retailer. Like successful stores that compete in this Amazon-dominated world, the sporting purveyor employs a “multi-channel” approach. In other words, DKS will take your money in-person or online.

Your dividend strategist personally tested each channel recently. I’m pleased to report that the company successfully took my credit card each time.

The first swipe was in-person. I took my daughters to our nearest Dick’s location and promised one gift for each of them. It was a modest price tag for an hour-plus of entertainment that featured my six-year-old testing out every piece of exercise equipment.

The second order nearly earned me an intervention from my wife. Rather than dust off my bike to keep pace with said six-year-old, I decided to turn back the clock to a simpler time before DKS traded publicly—and purchase rollerblades to keep up with my kids.

My Shipping Notification (aka My Wife’s Worst Nightmare) 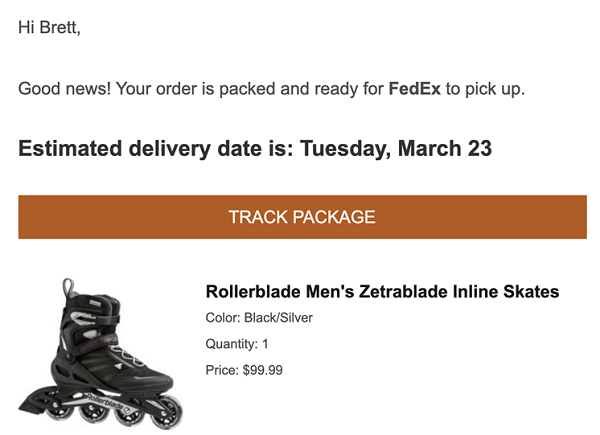 E-Commerce Sales as % of Total Sales 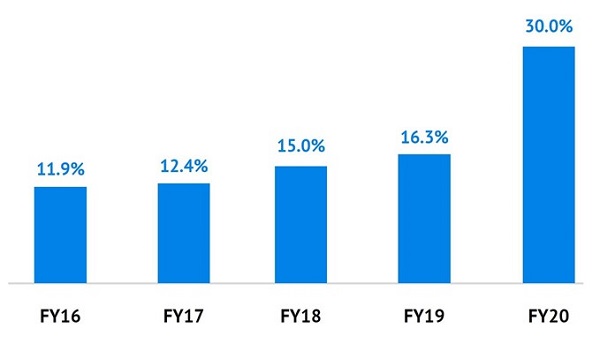 This trend is very bullish because e-commerce sales scale faster than brick-and-mortar purchases. We can see this when we look at DKS revenue growth, which looks like a stick pulled from its hockey department. And this isn’t a temporary trend—it’s a permanent bump in this retailer’s trajectory.

This is why we added the stock to the Smart Retail bucket of our HY portfolio four weeks ago. Morningstar disagreed and issued a bearish report on Aug. 25. Oh, what timing! Within hours of the Morningstar report, DKS announced that it was: 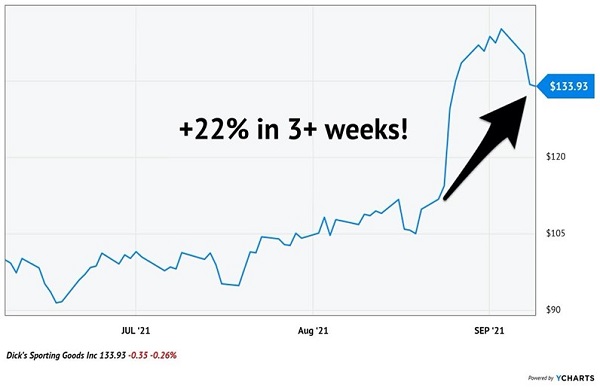 If you enjoyed these gains, congratulations! And please, don’t make the same mistake I made many years ago. Let this dividend winner run!