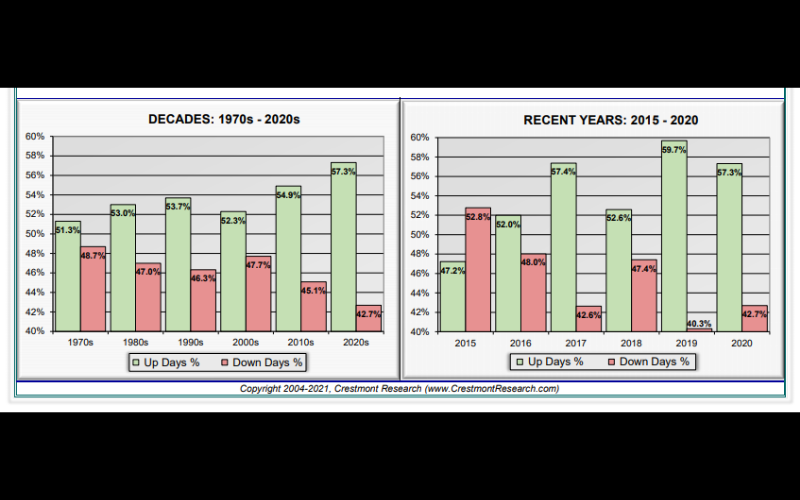 Overall the numbers hardly seem impressive. The basic formula of Vegas is that for every one dollar of betting casinos make a nickel and out of that they need to pay for all the staff, the infrastructure and the advertising. Yet the latest pre-pandemic data the total revenue of Vegas casinos was in excess of $22 Billion in 2019. The nickels add up.

There are big differences between trading and gaming

I am always loath to make direct comparisons between gaming and trading because although the two seem superficially similar there are key differences between the two activities. Gaming is a fixed odds structure with inviolable rules that always conform to the law of large numbers. It’s also (unless the equipment is broken) a nearly always random process where one bet is completely independent of the next because it is not based on human behavior (poker is the exception).

Trading is both less predictable and less random

Trading on the other hand is a social construct of very few rules and certainly none of them fixed. Academics like to pretend that trading generally follows the standard distribution curve but that’s not true.  Trading is open ended, contingent on  human action and reaction, often not random and most importantly subject to what is known as fat tails. These are events (like market crashes)  that should happen once every 10,000 years but occur at least once a decade. So trading is both less predictable than gaming and less random.

Stocks are subject to upward drift

Ultimately however, both gaming and trading depend on numbers and to that end here is a fascinating statistic that should make your eyes bulge out. If I were to ask you what is the spread between winning days and losing days in the stock market, what would you say? Many people would guess that any given day is a 50% bet, but the numbers actually tell a very interesting story. For the past seventy years from 1950 to 2020 the ratio between up days and down days is actually 53.8% to 46.2%. That is a 7.6% edge to the long side – odds that are 1.5 times better than some of the most popular games in Vegas.

Stocks as an asset class are unique in this way. The spread doesn’t exist in commodities or currencies which are bounded instruments whose value does not change much over time. It’s the reason  why the UK was about 1.5 in 1970 and why it’s close to that value today. Meanwhile the was 700 in mid 1970’s and is more than 33,000 today. Stocks are subject to what is called an upward drift and that small but very persistent spread between winning and losing days is the reason why long term investing is such a powerful way to generate wealth.

But the data on stocks also provides a very interesting insight into trading. It suggests that being short is a sucker bet. Of course there are a million exceptions to that statement and the history of speculation shows many examples of wildly successful shorts like Enron, Worldcom and eventually maybe even Tesla (NASDAQ:). Indeed the shorts could make a very credible claim that 94% of all stocks ever issued to the public have either gone bankrupt or been merged out of existence. If you are speculating on individual issues you may indeed prove profitable from the short side. But if you are day trading stock indices the data is incontrovertible. There are only two ways to bet if you want to be on the right side of probability – long or cash. The upward drift of stocks is so established that any momentum breakout strategy naturally favors the long side. This is particularly true over this decade when the spread between winners and losers was so wide (57.3% to 42.7%) that you could have minted money at will if you had a decent long only intraday strategy.

The long trade has a bigger edge than most Vegas games

But what is truly surprising is that this approach would have worked even during the worst time for stocks since the Great Depression – the 1970s. In  the 1970s equities went nowhere for a whole decade losing 50% of their value twice during that time. Yet even during that most miserable period when mass media proclaimed that stocks were dead forever the spread between positive and negative days was 51.3% to 48.7% or 2.6%  – same as blackjack.

Today’s extraordinary bull market can’t last forever but while the party lasts traders need to be keenly aware that the long only trade has a 7.6% advantage. Those are odds that would make Vegas executives green with envy which means the only way to trade is long and strong or dash into cash. Trying to pick tops is a sucker bet.