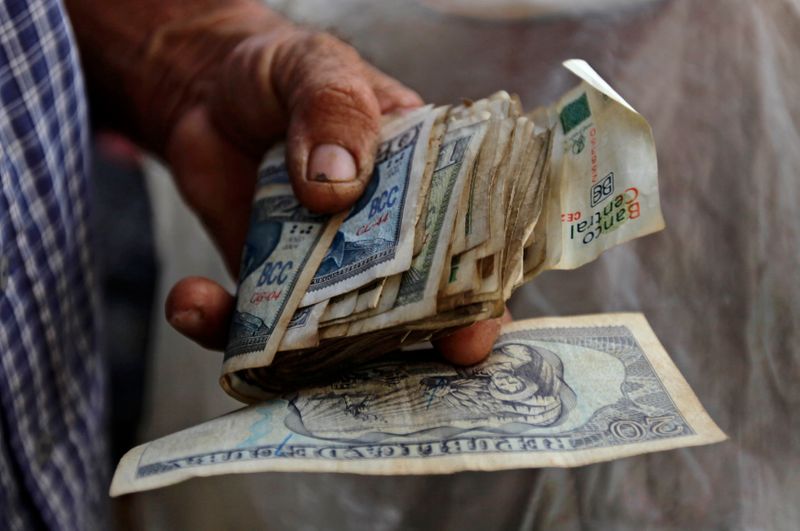 © Reuters. A farmer holds a wad of Cuban money at a vegetable stall at a market in central Cuba

HAVANA (Reuters) – Cuba said late on Thursday it would start its long-awaited monetary reform in January, eliminating its dual currency and labyrinthine multiple exchange rate system in a bid to improve business conditions in the crisis-stricken economy.

In a televised address to the nation, President Miguel Diaz-Canel said the Cuban peso would be left, fixed at a single exchange rate of 24 per dollar, scrapping other more favorable rates in what amounted to the first devaluation of the peso since the country's 1959 revolution.

"We consider the conditions have been created to enable us to announce the start of the task of (monetary) ordering from Jan. 1," said Diaz-Canel, sitting next to Cuban Communist Party chief Raul Castro.

For nearly three decades, two currencies have circulated in Cuba's state-run economy: the peso and the convertible peso (CUC), pegged to the dollar.

These have been exchanged at various rates: 1 to 1 for state-owned businesses, 24 pesos for 1 CUC for the public and others for joint ventures, wages in island’s special development zone and transactions between farmers and hotels.

The government has said it will eliminate the CUC as part of the currency reform, although Diaz-Canel did not refer explicitly to it on Thursday, simply saying there would be just one exchange rate from January.

Economists say the reform spells short-term pain for Cubans but is important in the long-term as varying exchange rates have effectively subsidized some sectors and distorted the way economy works.

Diaz-Canel said it was no "magic solution" to the cash-strapped country's economic problems.

"However it will favor the creation of the necessary conditions to advance in a more solid manner," he said.

Economists expect triple-digit inflation, and government announcements in recent months suggest it does too. It has said the initial devaluation will be accompanied by a five-fold increase in average state wages and pensions even as many state-controlled prices are increased or allowed to respond to demand.

But the wage increase does not apply to around two million of the seven million-plus labor force in the private sector, informal sector or who simply do not work.

"The task is not void of risks," said Diaz-Canel, saying it was one of the most complex challenges Cuba had faced but promising that "no one will be left destitute".

Those who raised prices unduly would face severe sanctions, he said.

The government has said some companies will be given a year to get their books in order before ending subsidies, and it will continue to provide universal and free healthcare and education, some subsidized food and other social gratuities.

Cuban economists estimate around 40% of state companies operate at a loss and though some will benefit from the monetary reform, such as those tied to the export sector, others will fail.

Some Cubans complain that multiple currencies will still be in use on the island given the government has been opening stores over the past year that sell consumer goods for dollars and other internationally traded currencies, though only with a bank card.

The government says this is a temporary measure needed to earn tradable currency to purchase more consumer goods amid dire scarcity as it is all but bankrupt.

But the partial dollarization will also provide some stability, especially for families who receive remittances, as devaluation occurs.