Focus could again turn to Washington, where so far a move in the Senate to raise stimulus checks to $2,000 has gotten nowhere. We’ll see if there’s any progress today. Some economists have said a bigger check could stir up more economic activity, but whether there’s enough support to get 60 Senate votes is an open question.

There’s almost no major corporate news in the form of earnings this week, and company announcements are rare, too. That means the market could continue to be thin and, you’ve got to admit, a bit dull. Yesterday’s action was like watching paint dry.

Despite that, it looks like volatility just won’t die down completely. The Cboe Volatility Index (VIX) jumped nearly 7% Tuesday to back above 23. It hasn’t dipped below the long-term average of 20 since February. Just think, one year ago VIX was trading at around 14, a sign of calm in the markets. With COVID-19, a recession and continued wrangling in Congress, uncertainty persists as 2020 draws to a close. We might not see VIX get back below the long-term range until the virus becomes background noise instead of a power saw.

A Bit Of Data To Wrap Things Up

There’s still some data to wade through before the ball drops at Times Square. Perhaps most importantly, tomorrow brings weekly initial unemployment claims. This closely-watched number has stubbornly stayed above 800,000 the last few weeks, and that’s about where analysts expect it to be on Thursday as well. The more weeks go by at 800,000 or above, the more that little dip in late November looks like simply that: A little dip.

Monthly payrolls are due a week from Friday, and some analysts expect a weak report to start the year, with job growth perhaps as low as 100,000 or even negative for December. The thinking is that the weak November report didn’t pick up all the jobs hit by renewed shutdowns. We’ll keep an eye on that data early next week (early next year, actually), and update as we get closer.

Long before that comes Chicago PMIlater this morning. Wall Street consensus is for a reading of 56.9 in December, research firm Briefing.com said. That’s down from 58.2 in November but still well above the 50 level that signals expansion. If the number comes in weaker than expected, it might be worrisome considering other data like retail sales and initial claims haven’t looked too robust lately. Any softness would likely be attributed to the virus and related shutdowns.

Crude prices ticked higher Tuesday to top $48 a barrel, the high end of what oil historian Daniel Yergin in a Wall Street Journal article called “Virus Alley”—the range between $40 and $50 where it’s spent a lot of time recently. It’s unclear how much tenacity crude might have considering this is traditionally the lowest demand time of the year.

Remember those headlines a few weeks ago about U.S. gasoline use over Thanksgiving hitting the lowest level since 1997? It’s gotten even worse since. U.S. gasoline consumption the week of Dec. 18 dropped to 8.02 million barrels a day, according to the U.S. government. That was the lowest for that particular week of the year since 1993, a time when the U.S. population was about 60 million less than today.

If you want to see where some late-year profit-taking might be taking place, it’s less in the mega-caps and possibly more in the small-caps. The Russell 2000 sank almost 2% on Tuesday and is now down about 50 points from the all-time high it posted a week ago. It’s not too surprising to see this, considering the RUT has outperformed the broader S&P 500 Indexyear-to-date. Weakness in Financials and Industrials—two of the three biggest sectors by weight in the RUT—might help explain Tuesday’s soft performance, with some of the weakness in Financials coming as the 10-year Treasury yield saw momentum slow.

Meanwhile, the “mega-caps” that helped lead the way Monday mostly didn’t show up to play Tuesday. FAANGs had a tough session aside from Amazon (NASDAQ:AMZN), and Technology as a sector suffered a loss. Tech still leads all sectors year-to-date going into Wednesday. It’s gained around 40%. The runner-up, Consumer Discretionary, isn’t really too close at 27%.

This looks like the second year in a row where Tech will top the leaderboard, and the fourth year in a row it will place in the top five. The last year that Tech got outperformed by the SPX was way back in 2013. Meanwhile, the suffering just doesn’t end for Energy, on pace to finish last among sectors for the third-straight year with double-digit losses each time. Energy has placed last in five out of seven years. If this were pro football, it would be time to fire the coach.

Two million Americans have now been vaccinated against COVID-19. While that sounds impressive, some health-care experts told the media it’s just too slow. The first vaccine was approved Dec. 11, meaning it’s been out there almost three weeks. At that pace, fewer than 1 million people a week are receiving the vaccine. The U.S. population is nearly 330 million, meaning at that rate it would take years to get everyone vaccinated.

The same health experts said vaccinations need to be around 3 million per week to vaccinate a large portion of Americans by mid-year. That means pharma companies need to make more product more quickly, and both the federal and local governments need to go all in on huge efforts to improve logistics. It could help if more companies get their products approved, but that’s still likely months away, so Pfizer (NYSE:PFE)/BioNTech (BNTX) and Moderna (NASDAQ:MRNA) might be the only games in town for a while.

This isn’t a prediction, but haste can make waste when it comes to vaccine production. It’s a complex product—not like making widgets—so the more pressure the manufacturers come under, the more chance of a snafu. Also, heavy demand for the final product can put pressure on suppliers of the ingredients (raw materials) for the vaccines. The pharma supply chain isn’t always dependable.

There’s also a continued challenge to keep the PFE vaccine at super-cold temperatures all the way from the factory to when it enters your arm. We’ve already seen delays in Europe due to worries about whether the PFE product stayed cold enough during delivery, media reports said this week.

All this means we’re far from out of the woods, and that the stock market may have gotten a little over its skis anticipating how quickly things can return to normal. Let’s hope Wall Street is right and the health experts end up looking too pessimistic. 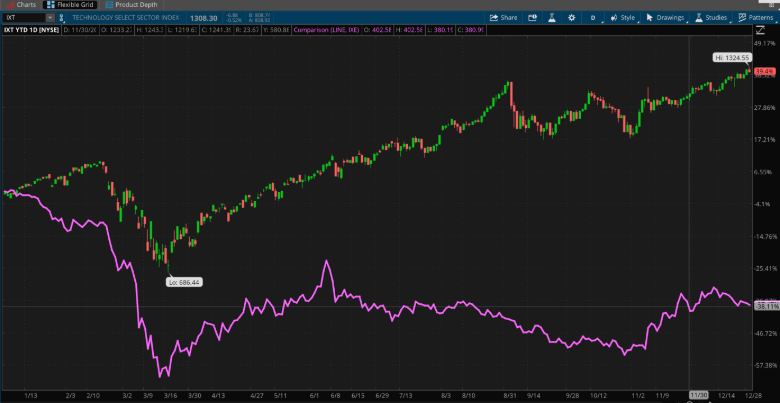 CHART OF THE DAY: NIGHT AND DAY. This chart shows the strongest performing sector year-to-date (Technology—candlestick) compared to the weakest (Energy—purple line). It looks like the second year in a row when these two will finish first and last. Can the trend break in 2021? Stay tuned. Data Source: S&P Dow Jones Indices. Data sources: ICE (NYSE:ICE), NYSE, Nasdaq. Chart source: The thinkorswim® platform from TD Ameritrade (NASDAQ:AMTD). For illustrative purposes only. Past performance does not guarantee future results.

737-MAX Gets Clearance, Clarence: Yesterday the Boeing (NYSE:BA) 737-MAX had its first commercial flight yesterday after nearly two years and it went without a hitch. That return to the skies came as U.S. passengers board planes made by Boeing (BA) and its competitors a bit more regularly these days. The Christmas weekend was a good example, with Sunday being the busiest day. Nearly 1.3 million people passed through Transportation Security Administration (TSA) gate checks that day, TSA reported, almost exactly half of the number from the same weekend day a year earlier. If 50% doesn’t sound great, well, it isn’t, but compared with earlier in 2020 it’s a huge win for the airlines. Back in April, there were days when fewer than 90,000 people passed through airports, less than 5% of normal 2019 traffic.

Airline stocks rebounded a bit early this week, but overall most of their year-to-date stock market charts look like hockey sticks with the handle stretching out nearly flat from last spring. While you wouldn’t necessarily expect these stocks to be back to year-ago levels with so much uncertainty still around, it is a bit surprising how little help they seemed to get from the $15 billion directed to the industry by the new government stimulus bill. The airline stocks might be a good barometer in coming weeks for how optimistic investors feel about economic recovery. Right now, they’re not exactly soaring.

Dollar Drain: The year comes to a close with the U.S. dollar back down to levels not seen since the spring of 2018. The dollar index recently fell below 90 for the first time since then. That’s not necessarily a bad thing. Why not? Well, for one, it reflects recovery and diminished uncertainty in China and Europe, both of which have seen their currencies rise sharply vs. the dollar. When those economies are healthy (as China appears to be now) and with the uncertainty of Brexit out of the way in Europe, there could be a better runway for growth in demand once the virus stops being such a huge factor.

More demand from U.S. trading partners is usually good news for multinational companies, which also benefit from their products looking cheaper when the dollar is soft. A 2017 St. Louis Fed study found that “a strong dollar is associated with net exports contributing negatively to GDP growth.” In addition, growing dependence on imports when the dollar is soft can also hurt the U.S. economy, the report found. The downside of a weak dollar is a possible rise in crude prices that often accompanies dollar softness. Also, it can often mean harder times for small-cap U.S. companies that benefit less from exports.

January Effect On Ice? With Wall Street closing out December near all-time highs, there’s growing concern that January could bring some reckoning. Nothing goes straight up forever, as the saying goes, and stocks have rallied double digits since early November. The January effect is a well-known phenomenon that often lifts small-cap stocks, but it’s hard to imagine a huge rally in the RUT after it outpaced its bigger cousins much of the last part of the year. Mega-caps also are closing out 2020 strong after a weak performance in September and October.

However, if January does bring some pushback against this overwhelming bullish sentiment, it would go against a trend seen the last three Januarys, all of which saw a pretty nice surge out of the gate. True, January 2018 ended with a dramatic drop after a parabolic rise earlier in the month. And no one last January could have foreseen what would happen in February and March once COVID-19 sank its fangs into the market. The prediction game is never a great one to play, especially if you’re a long-term investor. Better to have your plan, re-evaluate it every so often to be sure it matches any changes in your circumstances, and then rebalance if necessary. Which hopefully you’ve taken the time to do as 2021 approaches. Just say “Roger” to that. “Huh?”