Despite more weak economic data from China, U.S. stocks are set to recover yesterday’s losses and more. will be released at 8 am ET. The current consensus expectation is for the formation of 638k net new jobs. The range of estimates is wide at 400-700k.

What To Watch Today

Chart Of The Day

Consumer Confidence affirms the that consumer confidence is falling quickly. The was 113.8 versus expectations of 123, and a prior reading of 129.1. Both the present situation and expectations components fell by approximately 10 points. The clue as to why confidence is fading lies in the survey’s inflation expectations reading. One year expectations rose from 6.6% to 6.8%. also in the report, the number of consumers saying jobs are plentiful fell slightly. Those answering jobs are hard to get rose slightly.

The chart below is our Consumer Confidence Composite index which is an average of the University of Michigan and Conference Board measures. There is a decent correlation between confidence and the markets and the current decline suggests weakness the market is heavily discounting currently.

The media is quick to dismiss the decline.

“Earlier this week, we noted that actual spending data from consumers belies the lack of confidence these survey reports suggest, serving as a reminder that an uneven recovery does not mean a forestalled one.

‘In our proprietary data, we see a modest softening, especially in the service sector,” Joe Song, an economist at Bank of America Global Research, told Yahoo Finance Live on Tuesday. “But it’s starting to stabilize to a certain extent. It does feel like maybe we’ve come to the bottom of it.’

Song added that ‘even though these economic data are starting to slow down… they’re still well above levels we saw at the start of the year.’”

That view is very short-sighted. While it seems consumers are still spending, such is a function of excess benefits still in the system. However, that liquidity is beginning to run dry. Secondly, much of the current economic data are measured on a year-over-year basis and those comparison are about to become extremely tough as the Q2-2020 data is removed from the equation.

Another Weak Survey With Inflationary Implications

Over the last week, regional manufacturing surveys have been weaker than expectations. Today, the most followed of the regional surveys, , fell to 66.8 from 73.4. Unlike China, the deterioration in these indexes appears supply-related. Order backlogs, for instance, have the largest increase. In fact, it is at its highest level since 1951! At the same time, production has the largest decline. The good news is inventories rose, but at 48.8 they still signal contraction. Prices paid rose to 93.9 a 40+ year high. New orders fell which is potentially a signal that demand is weakening from its torrid pace. Overall the report leads us to believe inflationary pressures are continuing.

The report has an interesting question as follows: “With enhanced Unemployment Insurance benefits set to expire in September, are you forecasting an increase in your staffing levels?” The answer: “The majority said they were not.”

China continues to show signs of slower economic growth ahead. Its is clinging to expansionary territory at 50.1 vs expectations of 50.2. Both the (47.5) and the Survey (48.8) fell below 50, signaling economic contraction. In addition to the negative effect of Delta variant, China is also to blame for the weaker surveys as they are steadily imposing new regulatory laws limiting certain types of businesses and activities. The actions are meant to improve their economy in the long run, but in the short run, they will come at a cost. The latest round of legislation imposes more control over private equity funds and limits public stock offerings from these funds. Other recent laws including limiting the time children can play video games, curbing capital expansion in entertainment, and more closely enforcing IP violations.

“The rise and fall and rise again in the port logjam can be seen in the chart below. July and August have seen a steady rise in congestion back to the peak of February. While there is often a seasonal surge in shipments in the late summer, the chart shows how this year’s back up is 10 times that of a year ago.” – Charles Schwab 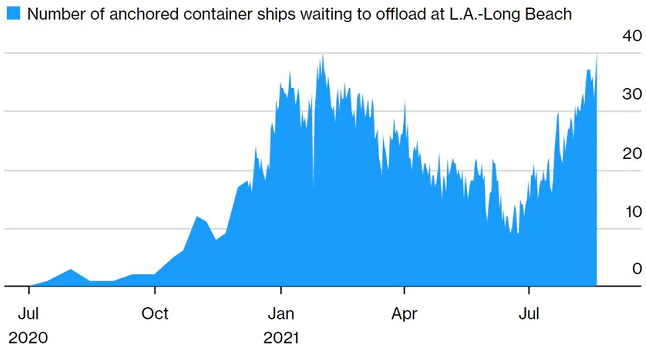 Despite the highest inflation rates in decades, the scary “Brace For Inflation” headlines are fading. The interesting graph below, courtesy of Arbor Research, compares the ratio of articles saying inflation will rise versus it falling.