Remember Brexit? Well, the market is reacting again to news about Britain’s divorce from the European Union, with the U.S. market following European shares lower on the possibility of the United Kingdom leaving the bloc this month without a trade agreement in place.

Worries about that potential setback for the global economy joined with investor concern about the continued lack of a Congressional coronavirus aid package to make for a generally pessimistic morning for Wall Street despite progress on the vaccine front.

Apparently, the market had already priced in a good bit of optimism about the Pfizer (NYSE:PFE)-BioNTech (NASDAQ:BNTX) vaccine with its ongoing rollout in the United Kingdom, approval in Canada, and hopes of an approval in the United States.

That built-in expectation has meant stocks in general aren’t rallying on news that a Food and Drug Administration (FDA) advisory panel decided to recommend the approval of the vaccine for emergency use domestically. This morning, the FDA said it “will rapidly work toward finalization and issuance of an emergency use authorization.”

That’s excellent news for the U.S. population, which has been facing a third wave of coronavirus infections, and the news is helping PFE shares buck the morning’s general weakness. But it’s not translating into broader market gains as investors apparently had been expecting that outcome and seem to be more focused on the lack of a stimulus deal.

On the coronavirus aid package, it’s probably worth remembering that with the current lame-duck Congress it will probably continue to be difficult to get a deal done.

Despite the general malaise this morning, those looking for a bright spot could turn to Walt Disney (NYSE:DIS) whose shares rose 8% ahead of the open Friday after the entertainment conglomerate said its Disney+ streaming service has nearly 87 million subscribers. It said it expects 230 million–260 million subscribers by 2024.

On The One Hand, Caution

Yesterday, while Wall Street waited for a stimulus package from Congress and news from the FDA advisory panel on the vaccine, a tug of war between varying sentiment seemed to be playing out.

On the one hand, investors and traders seemed to be worried about the economic recovery after weekly jobless claims numbers came in worse than expected as the third wave of coronavirus infections continued to mount. Initial claims for the week ended Dec. 5 increased to 853,000 from an upwardly revised 716,000 the prior week. Economists in a Briefing.com consensus had expected the new number to come in at just 720,000.

There may also have been some buying in tech-related stocks as the so-called stay-at-home trade seems far from dead given the high levels of COVID-19 infections and state restrictions to try to combat the illness.

On The Other Hand, Optimism

The tech-heavy Nasdaq Composite ended in positive territory while the other two main U.S. indices ended in the red. But the selling wasn’t that pronounced. And the moves in the VIX and Treasury market weren’t that big. Even though investors had one foot on the risk-off side of the line, they seemed to have the other foot on the risk-on side.

The Russell 2000 Index handily outperformed the main three indices. Because it’s composed of smaller domestic stocks, that index can often be an indicator of how investors think the economy might do in the future. With a rise of more than 1%, it seems like investors and traders were thinking that a vaccine and eventual stimulus deal could end up helping the economic recovery (see chart below).

In another bright spot, Airbnb (NASDAQ:ABNB) shares rose more than 112% in its first day of trading. That eye-popping gain came on the heels of a strong initial public offering from Doordash (NYSE:DASH) and indicated that there is healthy market demand for IPOs, another possible indicator that investors are looking past the current pandemic woes.

It’s worth mentioning, however, that caution may be warranted when it comes to valuations. The strong IPO performances against a backdrop of stocks near record highs when we haven’t even gotten a stimulus package or domestic vaccine approval might be cause for a pause for investors thinking about getting in or adding to positions at these heady levels.

Another indicator that there was still risk appetite in the market came from oil prices, with the international benchmark—North Sea Brent—rising above $50 a barrel for the first time since early March. U.S. benchmark WTI crude also rose as traders apparently have been cheered about a global demand recovery helped by the vaccine. A weakening U.S. dollar also appeared to help boost oil prices.

And, returning to the jobless claims number, there seems to be some thinking in the market that such dismal data could spur Congress toward getting a stimulus deal completed sooner rather than later, which would be a boon for equities.

So, it seems that investors are trying to figure out what kind of mix they want of companies that would benefit from a reopening, such as energy stocks, which gained strongly Thursday, and stocks that will benefit if people have to stay at home longer, such as Peloton Interactive (NASDAQ:PTON) and Zoom Video Communications (NASDAQ:ZM), which gained strongly on Thursday. 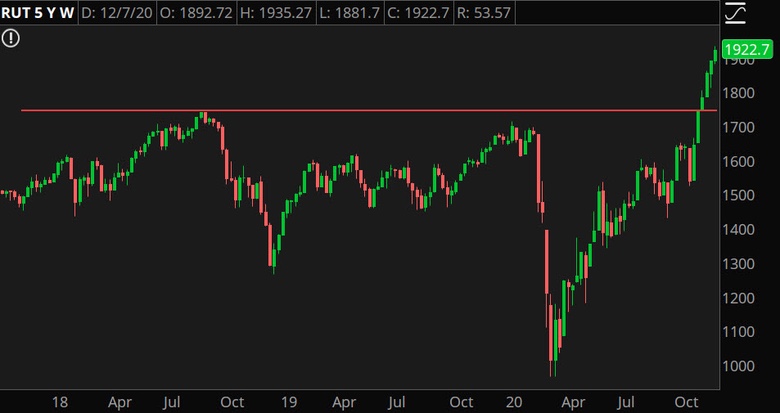 CHART OF THE DAY: OUT OF THE RUT, BIG TIME. Over the past three years, the small-cap benchmark Russell 2000 Index (RUT) topped out in the 1700s twice ahead of sizable retreats. As 2020 comes to the close, however, RUT blew through the all-time high and hasn’t looked back, as evidenced by the string of green weekly candles on the right of the chart. Data source: FTSE Russell Indexes. Chart source: The thinkorswim® platform from TD Ameritrade (NASDAQ:AMTD). For illustrative purposes only. Past performance does not guarantee future results.

Forward Looking Statements: With the stock market being a forward looking beast, let’s look at what might happen with fourth quarter earnings. Estimates for S&P 500 earnings are showing a decline of 11.2% for the last quarter of the year, according to Zacks Investment Research. While that’s a better picture than the one painted in July, when estimates were for a 14.4% decline, it’s still not that great. However, the research firm said in a recent note that the most current estimates might start getting revised higher. The -11.2% expectations have stayed the same for the last two weeks, the note said. While that could reflect surging coronavirus infection rates, Zack’s said it suspects the stalling trend is just a seasonal phenomenon because of the quiet period between earnings releases. “We strongly feel that the positive revisions trend that we have been seeing over the last few months will pick up again as more companies report quarterly results and discuss their outlook for the coming periods,” the note said.

Dr. Copper’s Diagnosis: Oil isn’t the only commodity that’s been in recovery mode recently. So has copper. That could be a good sign for the economy. Because the red metal is used in a wide variety of applications, such as piping for buildings and wiring for electrical systems, it is often referred to as Dr. Copper, as if it had an advanced degree in economics. The commodity is often seen as a forward-looking indicator. So it may bode well that copper futures have hit their highest point since 2013. The recovery in China, which is basically the world’s factory, has helped copper prices. They have also been underpinned as mortgage rates have boosted the U.S. housing market. With that backdrop, it seems encouraging that the most actively traded copper futures contract, which is for March delivery, is at its highest point in years, apparently helped by hopes that a vaccine and a Congressional stimulus package will further aid the global economic recovery.

Looking At GDP: With economic growth in mind, now seems to be a good time to check in with the Atlanta Fed’s GDPNow forecasting model. The latest estimate for the real seasonally adjusted annual gross domestic product growth rate in the fourth quarter stood at 11.2% on Wednesday, unchanged from the Dec. 4 reading. It’s notable that the GDPNow model estimates have been in the double digits since Nov. 25. What remains to be seen is to what extent this third wave of COVID-19 infections affects the outlook for fourth quarter GDP.