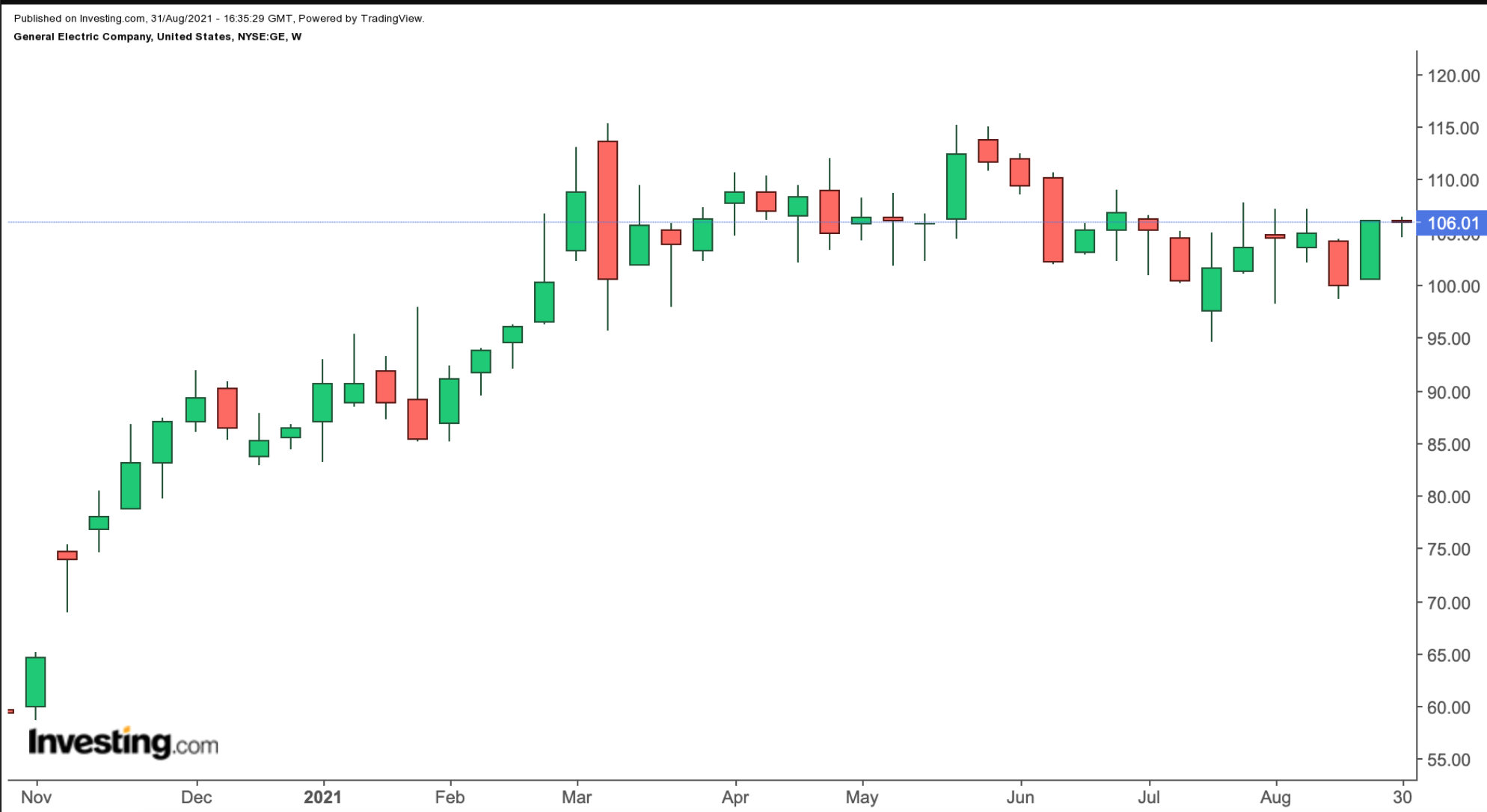 Despite the run-up in price over the past year, Wall Street is still bullish on the company in the long run. According to 19 analysts polled by Investing.com, the 12-month median price forecast is $122, implying a return of about 15.5%. 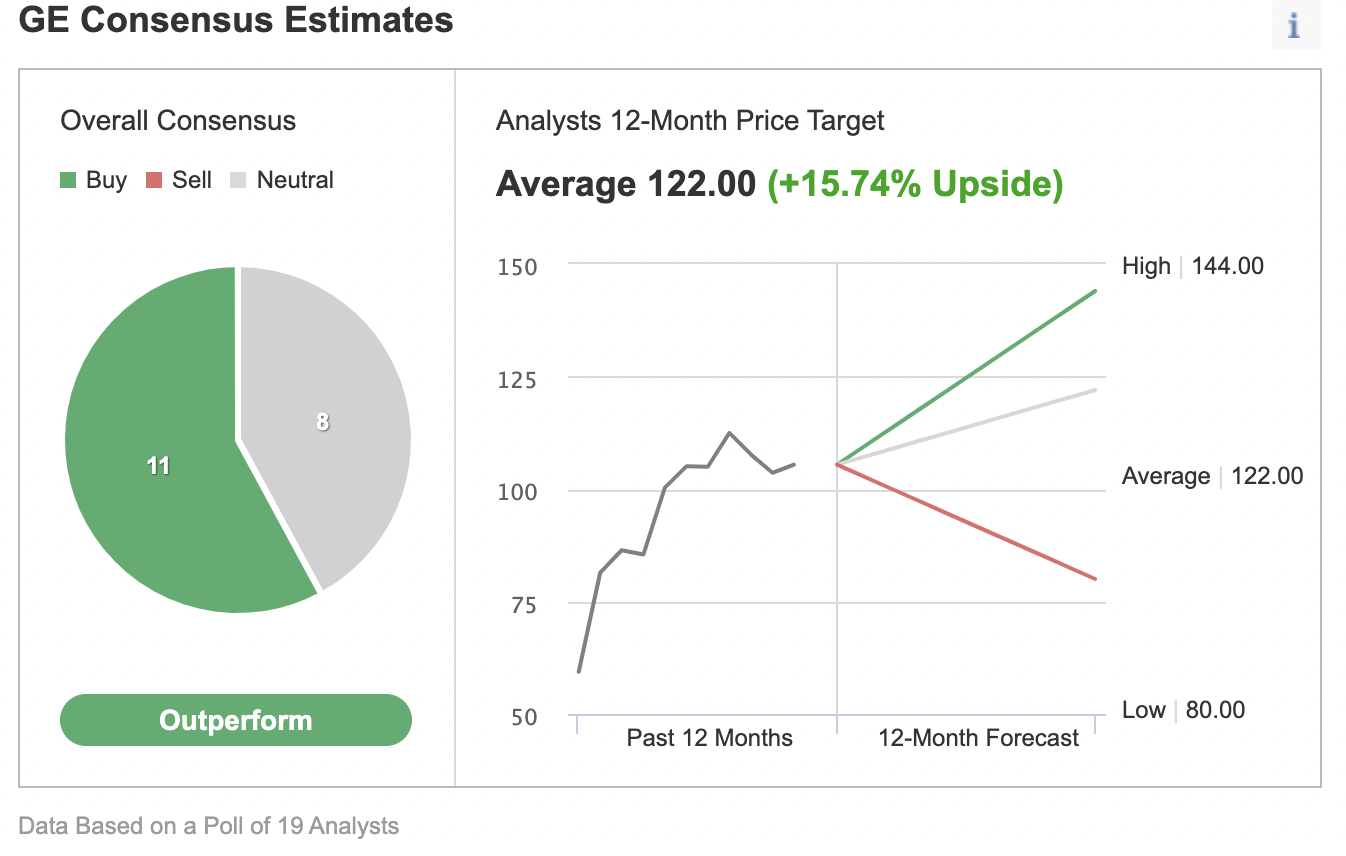 Yet, investors who pay attention to technical charts would note that there is resistance between $105 – $110—a level the shares would need to clear before making a new attempt toward $115 and above.

So today, we look at how moderately bearish investors might consider putting together a bear put spread on GE stock. Investors who expect the next move in GE shares to be lower could benefit from such a strategy.

It might also be appropriate for long-term investors to use this strategy in conjunction with their long stock position. The set-up could offer some short-term protection against a potential decline in price in the coming weeks.

In June 2018, GE stock was removed from the . General Electric had been a member of the blue-chip index for more than a century.

Since then, under the leadership of CEO Lawrence Culp, management has been cutting costs, reducing debt and working to return to its industrial roots. The group currently focuses on four core segments: health care, aviation, power and renewable energy.

On July 27, GE issued Q2 , which pleased investors. Revenue increased by 9% year-over-year to $18.3 billion. However, it was still below pre-pandemic levels. As a result, adjusted earnings per share came in at 5 cents, compared with an adjusted loss of 14 cents a year ago.

Wall Street noted that all four segments improved earnings on a YoY basis. Since 2018, management has been working to improve the balance sheet and reduced total debt by an eye-popping $70 billion. As of June, General Electric has only $64 billion of outstanding debt.

On the results, Culp said:

“… our operating margins expanded across all segments, and we generated positive industrial free cash flow. Momentum is building across our businesses, driven by health care and services overall, with aviation showing early signs of recovery.”

Management increased the full-year industrial free cash flow (FCF) guidance to a range of $3.5 billion to $5 billion, up from previous guidance for between $2.5 billion and $4.5 billion. The company expects adjusted earnings per share for the year to come between 15 and 25 cents. GE stock is currently trading at 52.2 times forward earnings, pointing to a potentially overstretched valuation level.

Readers who believe there could be some more profit-taking in General Electric stock in the short run might consider initiating a bear put spread strategy.

As we have already noted, it could appeal to investors who are already long GE shares. A bear put spread would give some protection against a drop in price in the short run.

This trade requires a trader to have one long General Electric put with a higher strike price and one short GE put with a lower strike price. As both puts will have the same expiration date, the spread is vertical.

Such a bear put spread would be established for a net debit (or net cost). It will profit if General Electric shares decline in price. As we write, GE stock is trading at $106.01.

The trader might buy an out-of-the-money (OTM) put option, like the GE Dec.17 100-strike put option. This option is currently offered at $4.83. Thus, it would cost the trader $483 to own this put option, which expires in about three and a half months.

The trader wants to see the GE share price decline, ideally with a closing price—at the time of expiry—that would be equal to or below the lower strike price (i.e., $90.00 here).

This maximum loss of $270 could be realized if the position is held to expiry and both GE puts expire worthless. Both puts will expire worthless if the share price at expiration is above the strike price of the long put (higher strike), which is $100 at this point.

This trade would break even at $97.30 on the day of the expiry (excluding brokerage commissions).

Wall Street is bullish on GE stock in the long run, a view we share. However, in the short run, there could be profit-taking in the shares, leading to swings and a decline in price.

When investors take a stake in equities, they are making the decision to accept a certain level of market and company risk. A strategy like a bear put spread can help mitigate some of that risk at certain times of the year.

Understandably, depending on a trader’s views, a different expiration date and/or a different pair of strike prices could also be chosen. Traders need to have a realistic price forecast and understand the risk/return profile of each trade set up. In other words, they need to balance tradeoffs.

Interested readers might want to improve their understanding of options and possibly talk to a financial adviser to see if options might be suitable for their portfolios.