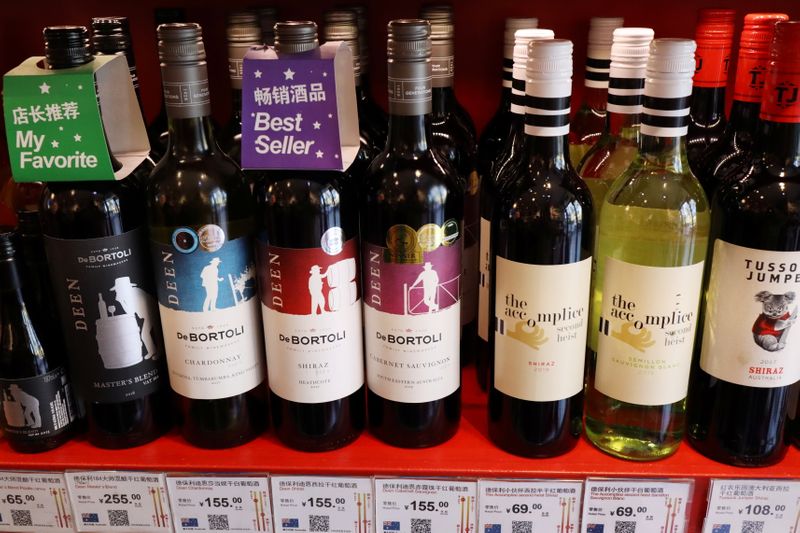 © Reuters. Bottles of Australian wine are seen at a store selling imported wine in Beijing

BEIJING/SYDNEY (Reuters) – China will temporarily impose anti-subsidy fees on some Australian wine imports from Dec. 11, the commerce ministry said on Thursday, ramping up pressure on the industry amid rising tensions between the two nations.

Importers bringing in wines being investigated for Australian subsidy benefits will need to pay deposits to China's customs authority, according to the statement.

"Australian wine is the second-highest price point in the Chinese market. And for Australia, it’s basically our highest-priced market," Birmingham told ABC Radio.

China in August launched an investigation into Australian wine subsidy schemes following a request from the China Wine Industry Association. Last month, it began imposing anti-dumping tariffs of 107.1% to 212.1% on wine imported from Australia after a separate anti-dumping probe.

The anti-subsidy deposits, of 6.3%, will be added to those tariffs for the world's largest listed winemaker, Australia's Treasury Wine Estates (OTC:TSRYF), as well as Casella Wines and Swan Vintage. Pernod Ricard (PA:PERP) will attract a rate of 6.4%.

Winemakers had already made commercial decisions to divert wine shipments away from China after anti-dumping tariffs of up to 212% were imposed, with some companies removing wine from ships en-route to China when they docked in Singapore, he said.

Canberra views China's moves against Australian wine as part of a pattern of punitive trade measures since Australia called for an independent inquiry into the origins of the novel coronavirus pandemic.

"The different claims that have been made by China just don't stand up to the evidence test, that's why we will continue to defend, to appeal, and of course to call this behaviour out," Birmingham told the Seven Network on Thursday morning.

On Wednesday, Birmingham told parliament China was not adhering to a free trade agreement between the two nations or its World Trade Organisation obligations and appeared to be targeting Australian products.

The Chinese embassy responded saying the comments about China's adherence to the free trade agreement were "totally unfounded".

Cai Xuefei, an independent liquor industry analyst based in Hefei, said the subsidy decision was "a punishment".

"When the price is higher, it will have a huge impact on sales," he said.

South American wine producers would benefit as Australian wine was disadvantaged on price in China, he said.