Tesla (NASDAQ:TSLA) shares plunged on Monday, tumbling 9% during the US session. It was the worst single-day slide for the electric vehicle manufacturer's stock since September.

As well, since the start of 2021, shares have fallen by almost 19% as of yesterday's close. In a tweet sent out on Monday, Euro Pacific Capital CEO Peter Schiff, who's famously skeptical of cryptocurrencies, blamed Tesla's recent, $1.5 billion Bitcoin investment for helping drive the stock into a bear market. We disagree. For a variety of reasons.

First, even if one were to rely on the arbitrary 20% gauge used to determine a bear market, right now the stock is down only 19%. For investors who remember the market's sharp selloff in December 2018, when it fell a fraction of a percent less than 20%, recall as well that it came back after that with a vengeance.

Moreover, a 9% loss of value in a single day is disproportionate to the carmaker having a $1.5 billion stake in Bitcoin. That investment is just a fraction of Tesla’s $686 billion market cap—and that's after yesterday’s selloff.

We can accept that Schiff's tweet may have had an impact on investor sentiment, particularly since Tesla's CEO, Elon Musk, has been famously outspoken about the crypto asset class, even on occassion boosting such tokens as Dogecoin and of course Bitcoin via his company's purchase of the digital currency. And though Bitcoin is now off about 15% from the all-time high it reached earlier this week, it's difficult to prove there's a significant correlation at this juncture between the selloff in Tesla shares and the slumping digital currency.

More likely, Bitcoin’s descent was related to its having reached a market value of $1 trillion, which woke up some investors to the notion of profit- taking. And Tesla’s biggest selloff occurred on the same day the entire tech sector took a beating.

Was it surprising that Tesla shares underperformed most of the rest of the sector? Not when you consider the stock has been outperforming its sector peers for so long. Tesla added as much as 26% of value YTD, compared to +6.6% for the sector on the S&P 500 over the same period, as represented by the Technology Select Sector SPDR® Fund (NYSE:XLK). As such, a 9% drop on Monday is fair enough, given XLK slipped 2.25%.

Based on the fundamentals, it looks as if investors are simply taking profits after milking the technology sector for all its worth and then some, since the pandemic hit the economy. With that said, it appears that Tesla (and Bitcoin for that matter) is merely in correction mode amid what is still very much an uptrend based on the weekly chart for the stock. 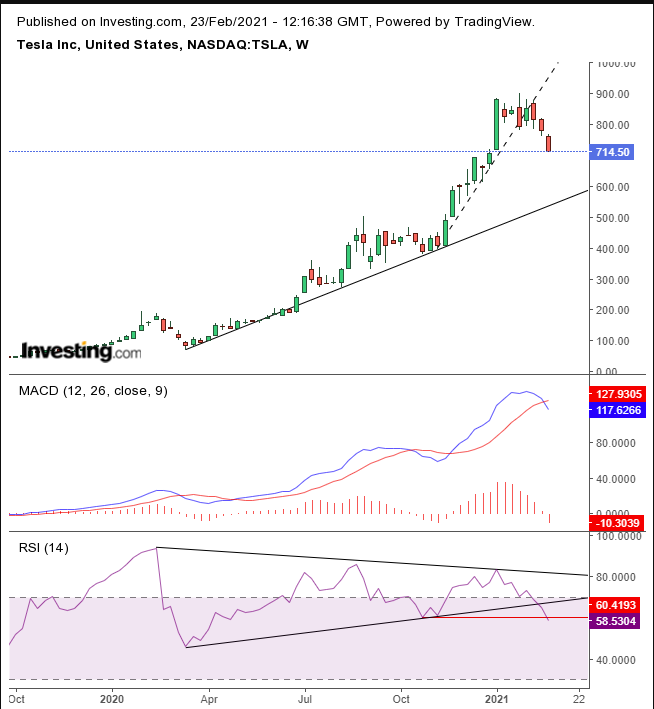 Nevertheless, the most recent leg in the valley was so steep, that it leaves room for another 30% drop, while remaining above its uptrend line since the March bottom, though it doesn’t have to fall that far. 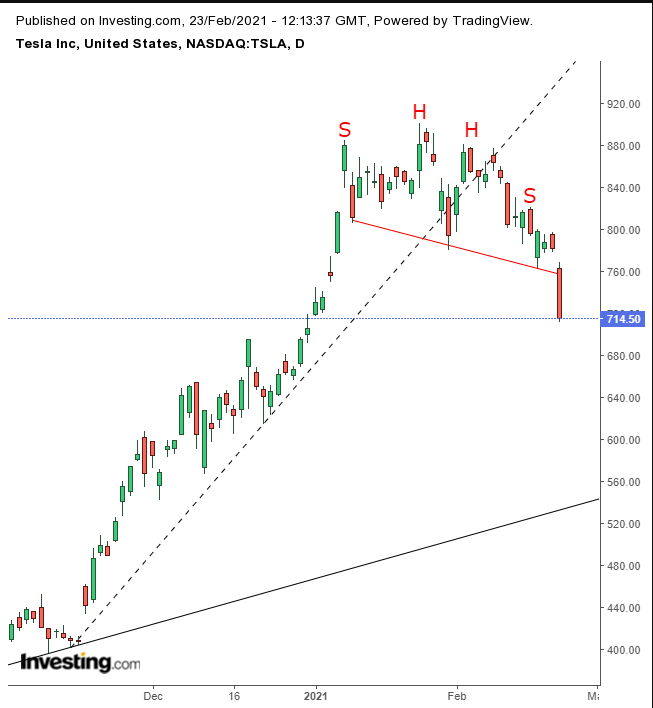 On the daily chart, the price produced a down-sloping H&S top, which means that demand was so overwhelmed by supply, it failed to form a proper right shoulder.

While this provides a stronger bearish signal, traders only received it after some of the minimum implied target was already depleted. A symmetrical triangle’s neckline would have been around the low of the right shoulder, at about $806, rather than $757, which is $49 lower.

Conservative traders should not short within an uptrend.

Moderate traders would short after a return move that verifies the pattern’s integrity.

Aggressive traders could short at will, provided they understand and accept the risk—after having read this analysis—and are operating with a sensible trade plan in hand.

Author's Note: This is nothing more than a sample. The actual analysis is in the body of the text. Don’t comment on this trade if you haven't read and understood the full analysis. It won’t reflect well on you. A sample, by definition, means it’s just one way to approach the trade, even if the analysis is correct, and it may not be. You need to customize a trade plan to your personal needs, including timing, budget and temperament. If you don’t know how to do that, take only small risks, until you develop this skill, crucial for trading success.