Among the market segments utterly decimated by COVID-19, travel companies have been especially hard hit as consumers and businesses locked down and sheltered in place. Airlines in particular suffered when bookings evaporated while the pandemic escalated.

But one travel-related company had already been taking a beating from investors, well ahead of the appearance of coronavirus. Aerospace megcap Boeing (NYSE:BA)—whose 737 MAX jet was once the most popular passenger airliner in the sky—was already burdened by bearish investor sentiment, shrinking passenger confidence and a plethora of regulatory hurdles worldwide after two fatal crashes that killed 346 people, one in late 2018, the other in early 2019, led to the grounding of the planes.

Once the pandemic hit, the already battered stock lost nearly three quarters of its value in a little over a month.

However, Boeing shares look like they're finally poised for take-off. Last month, the US's Federal Aviation Administration (FAA) said the planes had been approved to carry passengers once again; other global regulators have indicated that additional approvals will be issued shortly.

Adding to the tailwinds for the stock: discount airline Ryanair (NASDAQ:RYAAY), which had already placed an order for 135 aircraft before the MAX was grounded, just asked for an additional 75 planes, a true vote of confidence.

Plus, after 631 days of being earthbound, the jet is once again slated to carry passengers. Brazilian airline Gol Linhas Aereas Inteligentes (NYSE:GOL) said it would resume flying the 737 MAX on its domestic commercial routes beginning Dec. 9. Gol is Brazil’s largest air carrier and, before the pandemic, offered more than 700 daily flights to 60 destinations. The company operates an all-Boeing fleet and has about 120 MAX jets on order.

Last week American Airlines Group (NASDAQ:AAL) staged a PR demonstration, enabling the plane's first flight post-grounding with press on board, in an effort to show passengers the jet is now safe after a 20-month ban. 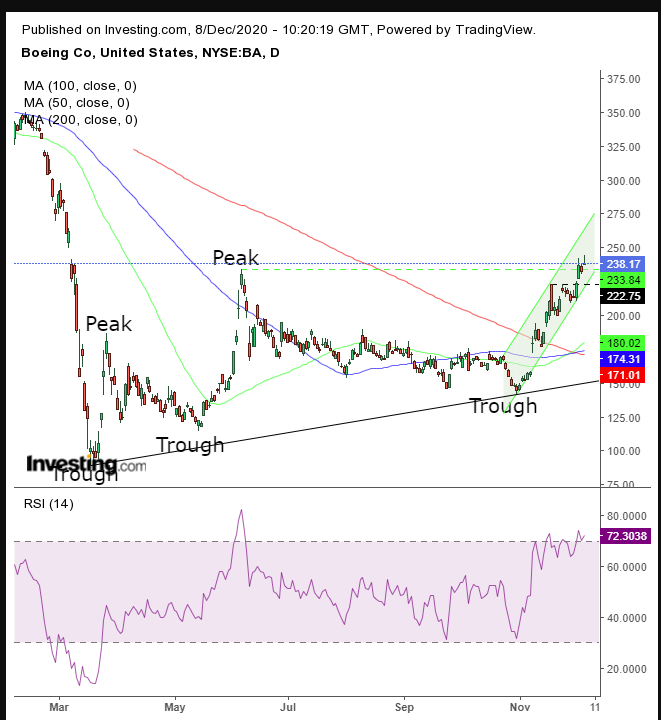 On Thursday, the stock posted a third rising peak since bottoming March, extending an uptrend, with the 50 DMA crossing over the 200 DMA, triggering a Golden Cross—one of the most well-known technical indicators and perhaps one of the most bullish.

However, that doesn’t mean the price will go up in a straight line. Per market mechanics, a healthy rally includes corrective, take-profit declines. Indeed, yesterday’s price action developed a Gravestone doji, a candle that demonstrates a bearish bias at the current price level.

As such, a safer bet would be to wait for a pullback toward the channel bottom at least—the $222 area could be a good entry, considering the presumed support of the previous congestion, before risking a long position.

Conservative traders would wait for the price to find support by the channel bottom.

Moderate traders might wait for the pullback for a better entry, not necessarily for further evidence of support.

Aggressive traders are likely to short the stock, as the overbought RSI is at the highest for this indicator since early June, when the price fell from these levels. After a pullback they might consider joining the long position already taken by the rest of the market, should the price hold along the supports. Considering the higher risk (for a higher reward) at this risk-level, we urge traders to be all the stricter with a trade plan.