Much has been written recently about China’s ongoing clampdown on tech companies in general. As well, global media outlets have been following Beijing’s lengthier but no less public crackdown on once high-profile entrepreneur Jack Ma and the Asian e-tail juggernaut he founded, Alibaba (NYSE:).

Since last November, when Chinese regulators abruptly suspended the $37 billion IPO of Ma’s Ant Group, Alibaba’s affiliate company, the value of the publicly traded Alibaba has dropped to half of what it was at its October 2020 record peak.

The latest regulatory move in what some market observers see as a personal vendetta against Ma will strike another blow at both the individual and the company he founded. According to a report first published in the Financial Times, Chinese authorities intend to break up Ant’s Alipay division and force the creation of a separate, independent loan app that could end up being state owned.

As a result, Hong-Kong listed shares of Alibaba Group (HK:) plunged as much as 6.3% this morning, settling down 4.2% at the close of trade.

For anyone thinking to buy the dip on current fundamentals, we reiterate from late last year and note that the stock’s technicals aren’t looking too promising either. 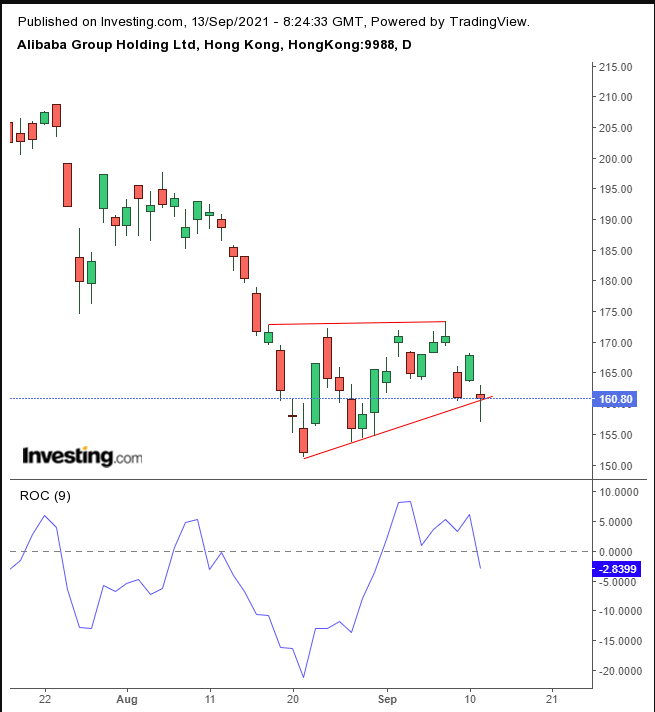 The stock is on the edge of a knife. It may have escaped a death sentence today, but bulls remain on the chopping block.

The stock managed to close above the bottom of a bearish pennant. But based on its Rate of Change—an indicator that measures momentum—it’s just a matter of time before another downside breakout takes shares yet lower.

The psychological dynamic of this trading pattern is that the price equilibrium is a result of short covers and the opposing supply of short sellers. If the pattern continues to play itself out, bearish momentum will push the stock below the pattern, after the short covering is complete and supply remains.

Note: the pattern is not complete, and no sell signal is provided, yet the price closed below the pattern, demonstrating that investors are still willing to be locked into their positions at the close. This could be a bear trap, however, so traders should proceed with caution and employ appropriate filters.

Conservative traders should wait for the price to penetrate the Aug. 23 low, then rally with dip-buying amid a “return move” to retest the pattern’s resistance.

Moderate traders could be content with a full candle’s close below the pennant. They, too, could wait for a corrective rise, for a better entry, if not confirmation.

Aggressive traders would sell at will, hoping US-listed shares will continue the decline when the Wall Street session opens.